Teens hint at gift ideas with parents via Twitter

Once if teens wanted a new pair of trainers they would hold catalogues under the noses of parents as Christmas and birthdays approached. In the age of social media, they are using Twitter to share sportswear gifts ideas with their parents – and according to new research*, this has an impact on sales.

The study, conducted by Researchbods (@ResearchBods), reveals that 43% of parents of teens who use Twitter said their children had mentioned sportswear-related content they had seen on Twitter. And 33% of those parents saw a Tweet from a sportswear brand their teenager showed them.

This activity is driving sales offline and online. The study reveals that 59% of parents of teens active on Twitter said they had bought a sportswear-related item offline because of content they saw on Twitter. Online, 48% of parents surveyed said they had purchased after clicking on a link in a Tweet.

The study also highlights the role of discovery that teenagers play when it comes to sportswear brands. As many as 44% of parents said they that they were likely to follow a sportswear brand on Twitter if their teen recommended it to them.

When it comes to sports brands, both parents and teens place value on Twitter content in the decision-making process.

Among parents, the value placed on Twitter content is particularly high: more than 50% when it comes to making a sportswear purchase.

To catch the attention of parents and teens alike, brands need to offer the kinds of content both groups value. While the majority of parents want to read reviews (66%) and product information (62%), teens themselves want content from brands around competitions (73%), positive motivational Tweets (54%) and celebrity endorsements (43%).

A good deal, though, works for everybody. Teens and their parents are interested in special offers and promotions (80%) and exclusive content such as insider information (50%). 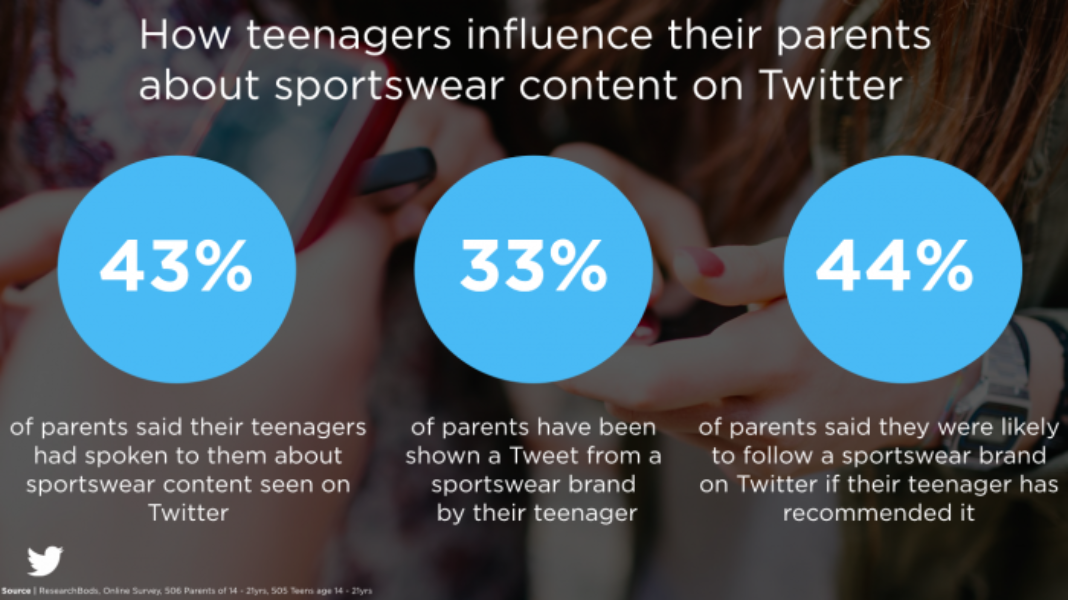 The research highlights not only changing social mores – how mobile content is something that parents and teens share with each other – but the power of content to spark interest and ultimately drive sales.

*Methodology: The study was conducted by Researchbods (@ResearchBods) in November 2014. It surveyed 416 teens age 14-19 and 390 parents of teens age 14-17. Both groups were active Twitter users (once a month or more).