When it comes to television, Twitter, hashtags and TV form a perfect partnership. Our new research confirms that this is a powerful combination, and 4.2 million #BRITs2014 Tweets underscore it.

The #TVTwitter study, conducted by @BrainJuicer on behalf of Twitter and the marketing body for commercial TV in the UK, @Thinkboxtv, identified two very different states of mind Twitter users are in when they’re watching TV and tweeting. The first is relaxed (lean back) and the second is engaged (lean forward).

With this research we wanted to understand the emotional and subconscious motivations around the combination of tweeting and TV watching. To achieve this we used a combination of ethnographic research, where we observed consumers in their homes, and quantitative research, to test the insights in a survey and on brands.

When consumers are relaxed, the focal point shifts between Twitter and TV depending on what is happening on the screen. Here viewers might be engrossed in a drama or a movie; they’re paying close attention to the action and aren’t so focused on tweeting as they watch. Come the show’s end, things change. People jump on to Twitter to share their reactions and read those of others — and the volume of Tweets spikes.

You can see in this visualisation of the finale of the BBC’s “Line of Duty”, which shows Tweets Per Minutes based on Topsy data. Conversation ramps up immediately before the show and then sharply drops off; it is as if Twitter becomes a shared living room and shushes itself as viewers focus intently on the screen action. As the show concludes, the audiences rushes back to Twitter to share their thoughts. 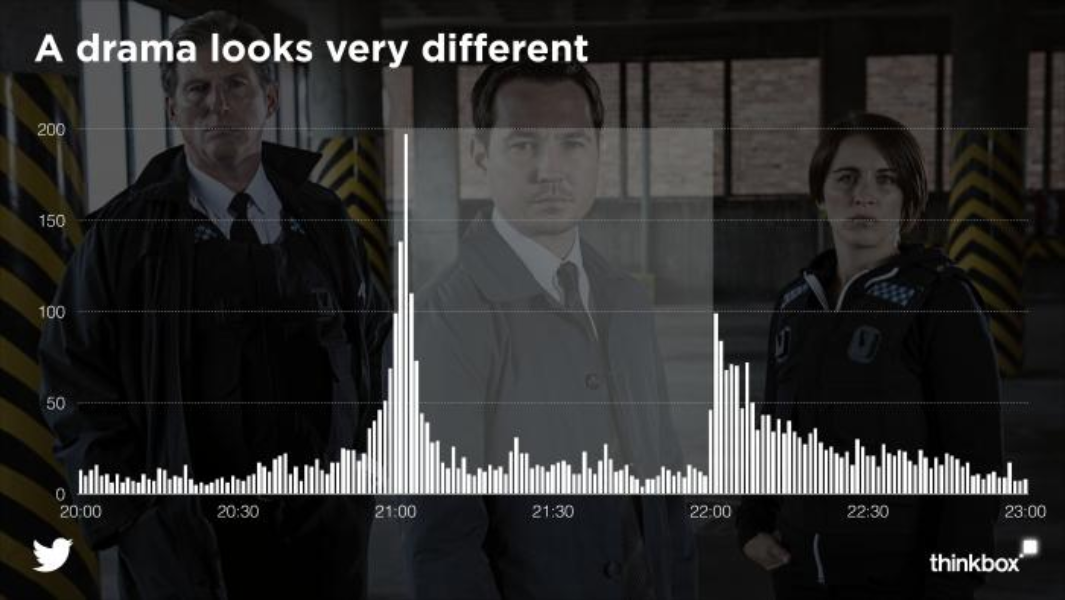 Viewers are always engaged, but particularly so when watching certain types of TV. Think of reality TV like the @BBCTheVoiceUK and live events like #BritAwards. This is when they are really in the mood to lean forward and actively join the conversation. Twitter users want to read what others are saying, retweet and have their say as events unfold in real time. This is about a continuous shared conversation, in which people tweet more.

In contrast to “Line of Duty”, and again showing Tweets Per Minutes based on Topsy data, the quarter finale of the @BBCTheVoiceUK sees conversation ignite as the show begins, and buzz throughout. 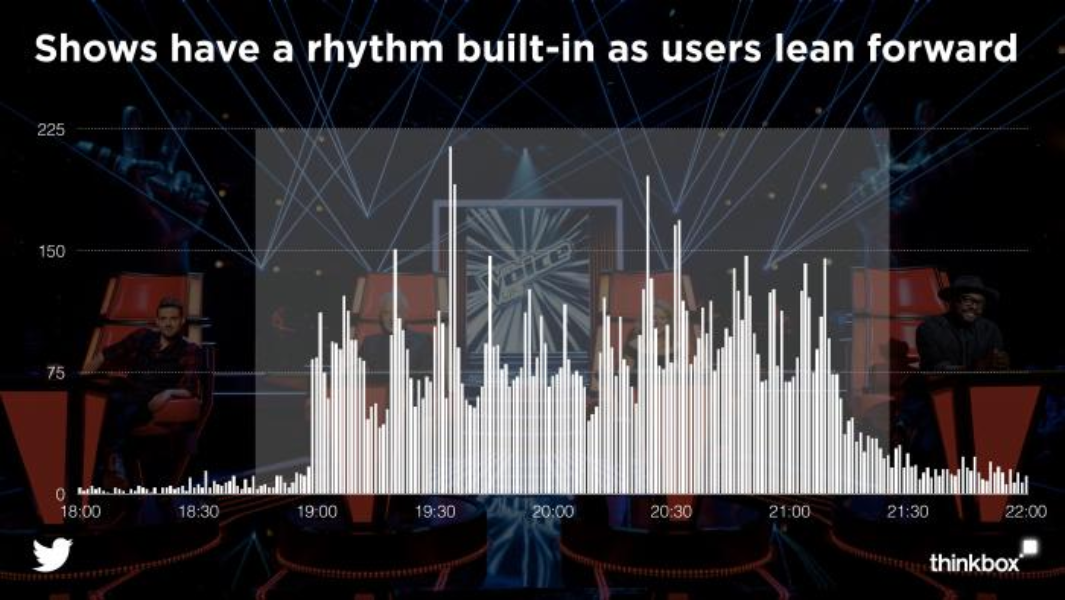 “Live events would affect my tweeting. Would probably make me tweet more…for example, the Royal Wedding or things like that, you know there will definitely be a conversation on Twitter.

It means you are not sitting by yourself watching it. You’re connecting with the wider world.

Understanding these two different states of mind, and being aware that consumers switch back and forth between the two, can help brands tap the pulse of how people combine their TV viewing and Twitter. And brands that get it right can get results, as we’ve previously shown: there is a 95% increase in message association vs TV alone, a 58% increase in purchase intent vs TV alone and the cost of acquiring new customers is 36% lower when TV advertising runs concurrently with Twitter Ads.

For example, @BrainJuicer looked at @Sainsburys and the number of people expressing “surprise” or “happiness” in relation to the brand. When we asked people who had not seen the TV ad or hadn’t had any interaction with Twitter, 20% expressed these positive emotions. When people had interacted with Twitter, this number rose to 24%. With TV alone, it was 24% again. However, when TV and Twitter were combined, the figure leaps to 41%.

This clearly illustrates how Twitter and TV can boost positive emotional responses from consumers. Significantly, the study found that this also increases the likelihood that consumers will opt for the brand in much higher numbers (Twitter-only, 29%, TV-only 33%; Twitter and TV together, 46%).

While people are likely to switch back and forth between the two states, one thing remains constant throughout: the hashtag. It is not only seen as central to many conversations that users have on Twitter; it is very strongly associated with how users tweet around TV.

Three in four of those surveyed by @BrainJuicer agreed that if users see a hashtag on TV, they look it up on Twitter.

I think that hashtags have become part of this generation’s language.

The study found Twitter users see hashtags around TV shows in two ways. Firstly as a punch line, or a creative and amusing way to sign off a Tweet about a show; and secondly as a way to sort and categorise conversation.

For brands, the good use of hashtags again can also pay dividends whether they are everyday or live moments. Recent research from our US team found that TV ads with hashtags also drive 42% more conversation. Furthermore, comments in response to ads with hashtags are 18% more relevant to the messages communicated in the ad. There are great recent examples of this from @CadburyUK at the #BRITs2014 and from @Specsavers in the Premier League: