The January transfer window has closed for another season, and we look back at how fans came to Twitter to share in the drama of one of the highlights of the football calendar.

Throughout January, Twitter was home to breaking news on signings, rumours about potential deals, and humorous interaction between fans.

During the transfer window, the most-discussed confirmed deals were: 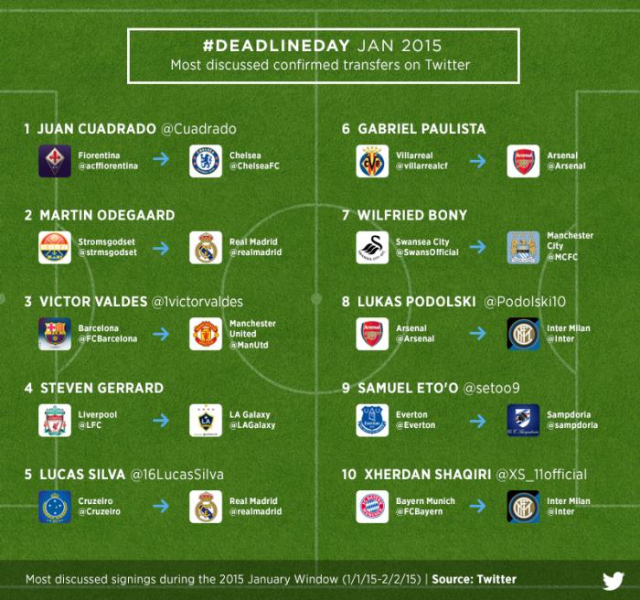 As well as hearing the deals broken first, fans come to Twitter to share in the rumour and speculation that surrounds their club’s transfer activity.

During the transfer window, the most-discussed rumoured deals were: 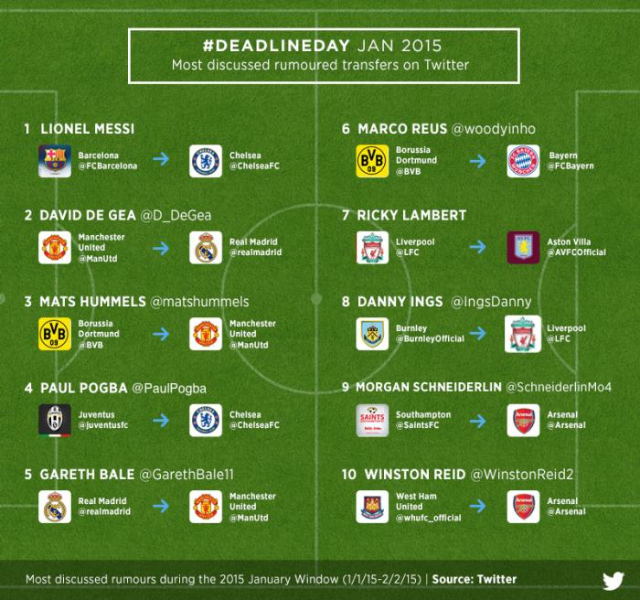 And the most-discussed Premier League clubs throughout January were: 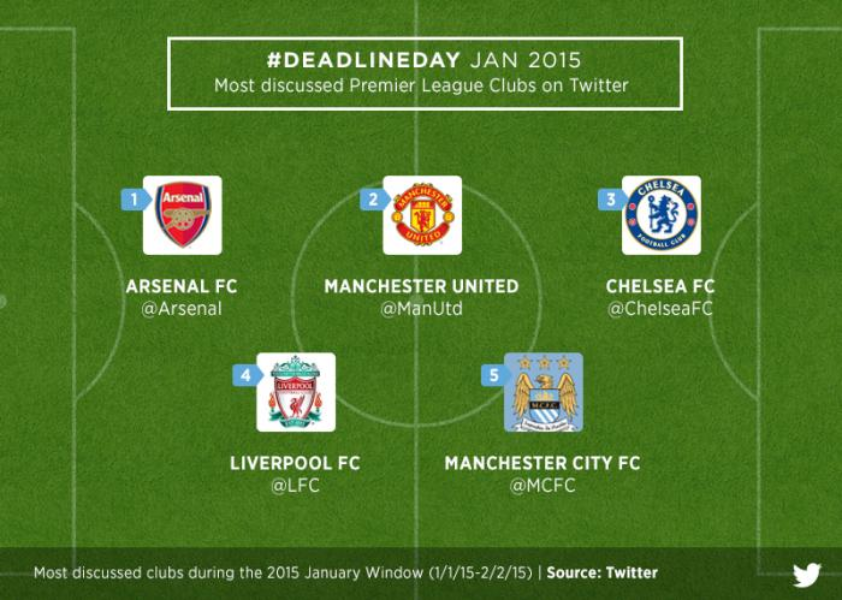 This heat map visualises the global conversation around Deadline Day across the 24 hour period:

The deal of the day came in the early evening, when Chelsea (@ChelseaFC) landed Colombian winger Juan Cuadrado (@cuadrado) for £23m. The moment Cuadrado’s signing for Chelsea was confirmed created the greatest peak in conversation on Twitter during the day.

The three most-talked about deals on #DeadlineDay were:

Clubs and Players used Twitter to break official news first, with Chelsea’s confirmation of the Cuadrado signing proving to be the most Retweeted message of the day:

The player himself also Tweeted his joy:

And Championship side Reading (@ReadingFC) used Vine to break news of their signing of veteran striker Yakubu:

While Sky Sports News (@SkySportsNewsHQ) calmed speculation of a move away from Swansea (@SwansOfficial) for Bafetimbi Gomis (@BafGomis), with a Tweet from the man himself:

Sky presenter Jim White (@JimWhite) - an institution for years on #SkyDeadlineDay - even made an unusual appearance via Vine:

Seeing the funny side

Earlier in the day, transfers had been in short supply, but speculation and humour were rife on Twitter.

Macclesfield Town (@thesilkmen) joked that they were close to securing the services of Manchester City (@MCFC) talisman @YayaToure.

While Crawley Town (@CrawleyTown) lined up Toure’s team-mate Sergio Aguero (@aguerosergiokun), at the expense of the chairman’s parking space:

Danny Ings (@IngsDanny) made light of speculation linking him to Liverpool (@LFC) by heading off to the cinema:

And to help football fans stay in touch with all the latest news, while avoiding the wrath of their bosses, William Hill (@WillHillBet) created a clever, office-friendly spreadsheet powered by Twitter:

With more than 284 million people using Twitter, including over 15 million from the UK, Twitter continues to be the place where people come to share in the biggest moments in the sporting calendar. In 2014, 8/10 of the UK’s most-Tweeted-about moments were football-related, and 2015 has started as it means to go on.