Whether it is a new album release from Blur (@blurofficial), birthday wishes for Ed Sheeran (@edsheeran), or this week’s BRIT Awards you will find it all on Twitter, where there is a huge conversation taking place.

Over the last year, that level of conversation has continued to grow. You will find all of the artists behind the Top 40 UK albums in 2014 are on Twitter*. Many of those artists will be present at this week’s BRIT Awards. There have already been millions of mentions on Twitter about this year’s BRITS, including Twitter users voting for the ‘Best British Video’ and those discussing nominations for categories such as British Group nominees:

It highlights the love Twitter users have for music and how it forms a daily slice of the conversation on the platform. That’s underscored by research conducted recently by Vision Critical. It found that over half of UK users follow music-related accounts on Twitter and 73% of UK users surveyed said Twitter is a great place to share music info.

We’ve brought together some keys facts here in this infographic. They show that not only is Twitter the place where music news breaks, it’s also where bands interact with their fans and where users discover new music or Tweet along to their favourite radio station. 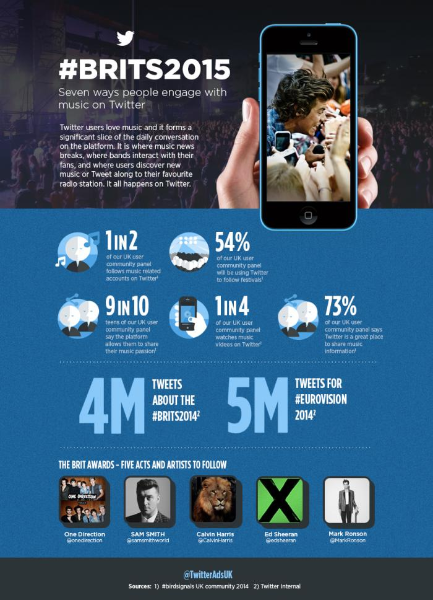