Twitter inspires debate and can prompt people to change their views, particularly those harder to reach 18-34 year olds, according to a new study of Twitter users and their attitudes to politics and voting in the UK.

The study, commissioned by Twitter and carried out by Promise Communispace (@Promise_CSpace), has valuable insights for brands into the kind of content that users want to help make sense of the world.

The research confirms the role that Twitter plays as a place to go and find information. It found that 37% of Twitter users aged 18-34 would go to Twitter to actively look for information about politics or the UK general election. And 34% of UK Twitter users have changed their vote from one party to another based on something they have seen on Twitter.

The data highlights not only the power of content that Twitter offers access to, but also how the information users read on the platform can impact how they think about issues and can spur them to act.

The study found that 45% of Twitter users aged 18-34 got interested in or joined a political or social cause that they learned about through Twitter. Furthermore, 37% of Twitter users surveyed said they would go to Twitter to actively look for information about politics or the UK general election.

Additionally, the study highlighted, not only how great content on Twitter can inform and educate, but some of the reasons why people actively turn to Twitter to search out information. These points provide insight into the kind of content and messages that can prove to be most effective at attracting the attention of Twitter users. 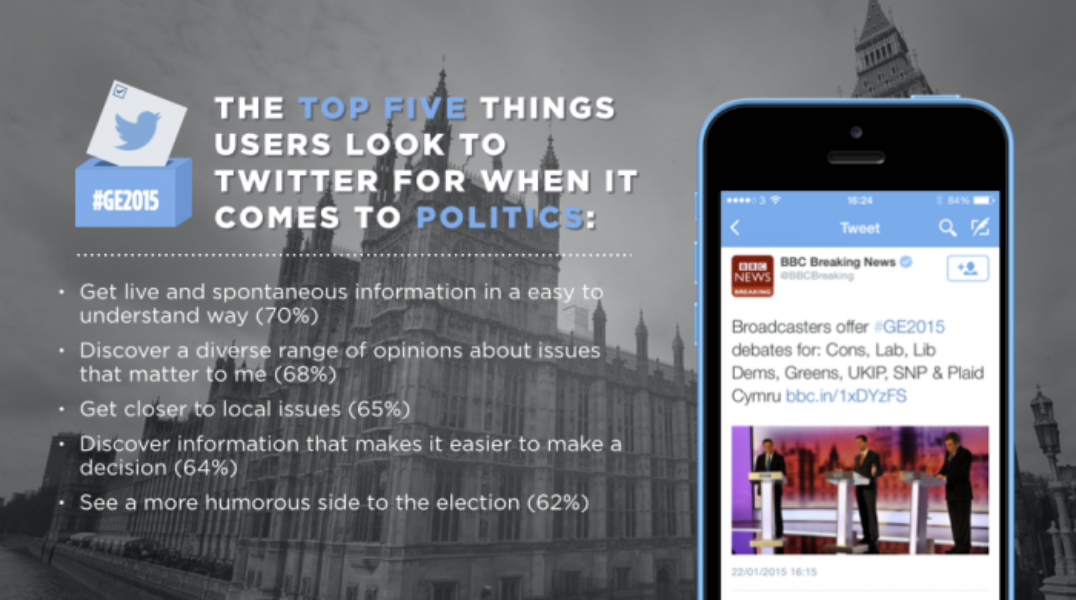 *The research was carried out in the UK by Promise Communispace in conjunction with Lightspeed GMI between 25 Feb. and 9 March 2015. The survey sample was 2,965 in total, including 1,722 monthly Twitter users; 1,105 of whom were aged between 18 and 34.