As a designer at Twitter UK, I’ve been lucky enough to work on some of our most exciting projects this year, such as emojis for Simon Cowell, One Direction, and Pope Francis.

Our increased usage of emojis reflects the popularity of the form, “emoji” was selected as The Oxford Dictionary word of the year, and these illustrations have had a massive impact on the platform. We regularly look for ways to improve communication, expression, and optimise thoughts and feelings on Twitter. That’s exactly what emojis can do. **Air punch**. I feel there is perhaps no finer embodiment of who I am than this dude:

For the launch of this year’s series of The X Factor, we worked with @ITV to let the audience vote for the first time on which judge would get which category. This included giving each judge and category their own emoji, so that every vote generated its own unique image.

When I started thinking about designing these, I realised it was compatible with my own experience. I believe that your work is a culmination of all the things you’ve loved in your lifetime, and I grew up surrounded by Nintendo, Cartoon Network, and MSN Messenger. In other words, colour, animation, and awesomeness were familiar to me from an early age, a perfect pop-culture education for designing emojis. With this project, it was therefore easy for me to convert the faces of @SimonCowell, Cheryl Fernandez Versini (@CherylOfficial), and the other “X Factor” judges into illustrated emojis.

The first step in the emoji process is working on the design skeleton of each face, and then it’s all about capturing personality. And with a small canvas, the trick is identifying those details that make a celebrity emoji look like who they are supposed to be.

Experimenting with ideas is so important because it teaches you what doesn’t work. For every good piece of work I’ve ever made, there were hundreds of awful ones that came before it.

Working in Adobe Illustrator, it’s become more natural for me to work on the computer by hand using the pen tool, starting with broad strokes and then adding finer detail later. In each case, I wanted to get these things right: 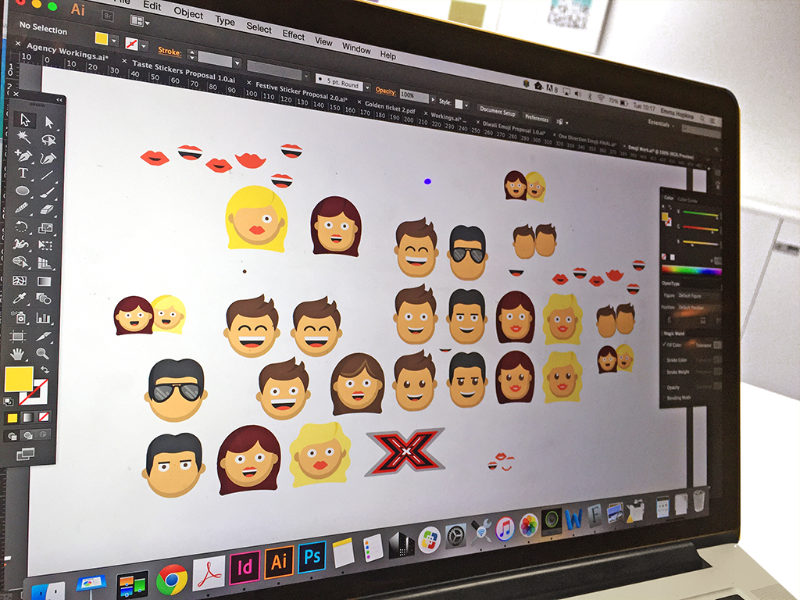 Once the emojis went public, it was exciting to see people responding so positively to a new visual element. It’s humbling to directly get the commentary or feedback on something you put out to the world.

As this project emerged, the original plan was to do a generalised One Direction emoji for their (massive) global fan base. Knowing the mindset of a teenage fan, I knew they’d go nuts for more than one – so I loved the idea of doing each individual band member. I ended up creating six emojis: @Louis_Tomlinson, @Harry_Styles, @NiallOfficial, @Real_Liam_Payne, the four boys together, and one for their new album “Made in the A.M.”

It was key to ensure each band member was instantly recognisable. Throughout the process, I continually wondered how to make them look better. As my thinking evolved, these were the points I fixed on:

I didn’t think it could get much bigger than Harry Styles – but the Pope (@Pontifex) is very much a global figure too, and earlier this year he made a historic visit to the US. For this effort, I tried different things, as I think it’s so important to experiment and fail: try that unknown typeface, flip shapes upside-down, add too many colours. Experimenting with ideas is so important because it teaches you what doesn’t work. For every good piece of work I’ve ever made, there were hundreds of awful ones that came before it.

I ran through various designs for the Pope emoji – alternate hats, quirky glasses, crazy bandanas. But the final outcome was one featuring his smiling face with the US flag behind him. This neatly helped convey the regional pride his visit represented. This was echoed by emojis representing New York, Washington DC and Philadelphia, which were all stops on his US tour.

As a Twitter designer, it’s a wonderful experience to bring these to life. It’s so exciting for people everywhere to see and make use of each of these emojis. I’m delighted to be a part of something so big, and look forward to creating a lot more.