#DiscoverMusic: The Retweet is the new autograph

Retweets from artists or bands are now as highly prized by music fans as autographs. New research underlines the role Twitter plays for fans, who can not only connect with their favorite artists and bands, but discover new music and join the buzz around concerts and festivals.

The study, conducted for Twitter by Crowd DNA , found that 74% of music fans on Twitter say a Retweet by their favourite artist is as desirable as a traditional autograph. Findings point to the value fans place in getting recognition from their favourite artists and in seeing their Tweet shared with other fans. 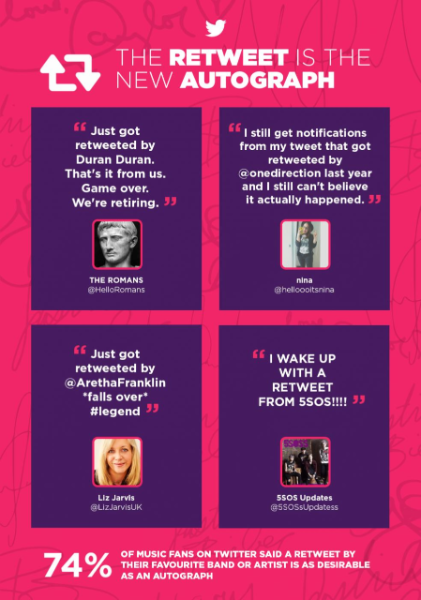 A wonderful example of this artist/fan interaction on Twitter took place last month. A fan of Taylor Swift (@taylorswift13) missed her connecting flight to London and the chance to see her perform at BST Hyde Park (@bsthydepark). The star joined the conversation and offered the distraught fan a free ticket to her upcoming show in Dublin:

We’ll see another example of this when @edsheeran takes to the stage at Wembley Stadium this weekend. Ed becomes the first solo artist to headline Wembley, just him and his guitar, as he prepares for a three-night run starting on Friday.

To celebrate the role his fans played in his journey, a selection of their first ever Tweets supporting Ed will be displayed on the giant screen mounted on the outside of the stadium. As well as on Wembley Way, fans’ Tweets will be on show around the stadium concourse and around the pitch. Fans will also be able to Tweet their selfies for display in the stadium.

Twitter is the place where music fans come to follow artists: Some 71% of them follow artists, compared to 41% of fans using other social media platforms. And Twitter isn’t only about following acts; it brings fans closer to their passion. Our study found that 60% of music fans say Twitter helps them get to know artists as real people.

In fact, later today @yearsandyears will allow their fans to use to Twitter to vote on what their new video will look like live as it is televised on Channel 4 (@channel4) at 9.45pm

And part of getting closer to favourite performers is the feeling of being in the know. Some 64% agree that Twitter helps them to discover exclusive info about artists.

Seeing music live can be a fantastic experience, and Twitter has also become an increasingly key aspect. As many as 80% of music fans on Twitter use it before, during or after a gig or a festival. And for music fans who can’t make it to live events, 59% say that Twitter allows them to feel involved, wherever they are.

*Source: Crowd DNA, Twitter x Music 2015. The study was conducted among 2,000 people in the UK, aged between 16-65, who identified themselves as music fans.