Video on Twitter is a powerful way to grab people’s attention, and with the recent introduction of autoplay, we’ve made it even easier for users to enjoy. This infographic highlights some of the benefits that Twitter video delivers to brands:

Recent research* conducted for Twitter shows that video on Twitter drives a +17% higher purchase intent among those who engage with Promoted Video compared to those who don’t (1). The impact video can have on how users feel about brands is even more telling. The research found that 68% of UK users felt more positive about a brand after seeing a video from it on Twitter (2).

From big events to everyday moments

Conversation is always happening on Twitter, but there are many instances around major events when it hits fever pitch. We’ll likely see plenty of these around the upcoming Rugby World Cup as fans share their passion about great moments, on and off the field on Twitter. At times like these, favourability for near-live video on Twitter compared to online video norms is 63% higher. (2)

But video on Twitter isn’t only for big events. It’s also for the now and the everyday. We undertook a piece of neuroscience research to test how people responded to content on Twitter. We found that, on average, video on Twitter drove an 18% stronger response in favourability than online video norms. (3)

Both figures show how there is a real desire from Twitter users to see great video on the platform and, when it’s used, how substantial its impact can be is.

You’ll find several more statistics about using video in our infographic below. In addition, we’ve included some best practices to help your brand get the most out of using video on Twitter. 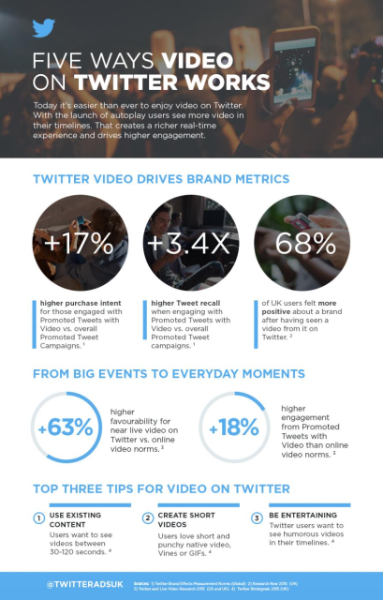