The #RBS6Nations starts tonight when Wales (@WelshRugbyUnion) take on @EnglandRugby at Millennium Stadium in a preview of the crunch group game for the two nations at the Rugby World Cup in September.

A total of 15 matches will determine the champion and, whoever you are supporting, Twitter will be your home for exclusive updates and conversation about the tournament.

England
As well as all six nations, 80% of all Six Nations players are on Twitter, including 33 out of 36 for England.

The five most-followed members of the confirmed England squad are: 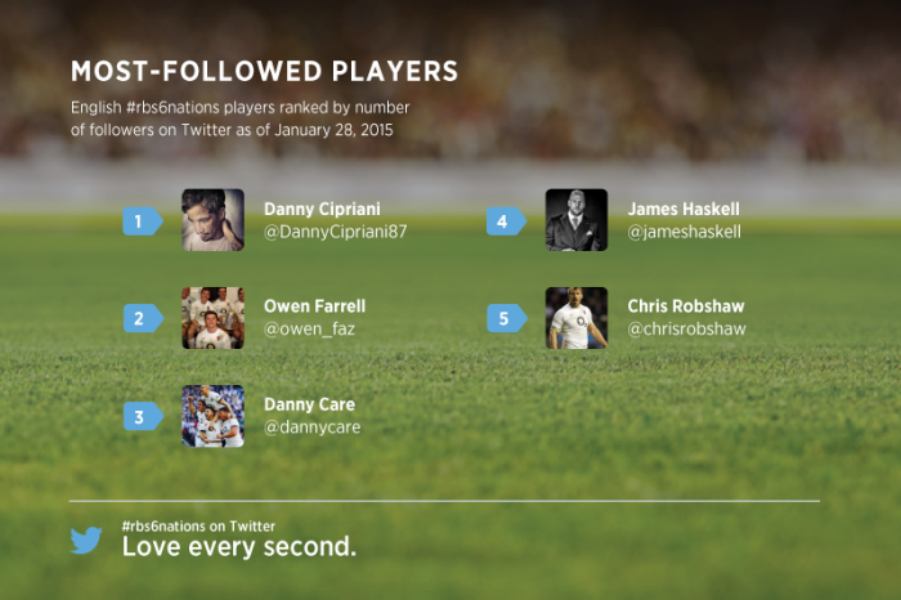 @EnglandRugby continue to bring their fans closer to the action via match-day rallying cry #CarryThemHome, which takes pride of place on the Twickenham pitch and in an attention-grabbing mosaic in the tunnel, immortalising photos and messages of supporters:

Ahead of their last match, against Australia, every one of the England starters and replacements was on Twitter:


The two-way #redrosechat between fans and players continues ahead of the Wales game, with fans also invited to participate in a photo-driven Twitter quiz:

Wales
Meanwhile, @WelshRugbyUnion have been using Vine videos to stoke the passion of their supporters ahead of the tournament, using the rallying cry of #IAmWales:

The five most-followed members of the confirmed Wales squad are: 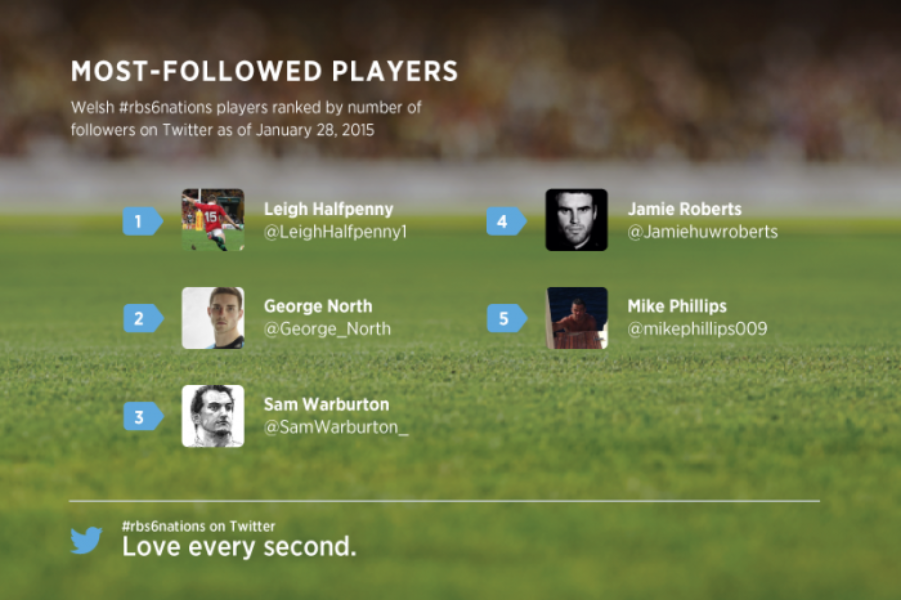 Scotland
@Scotlandteam get their campaign up and running against France and are Tweeting using hashtags #backingblue and #AsOne.

The five most-followed members of the confirmed Scotland squad are: 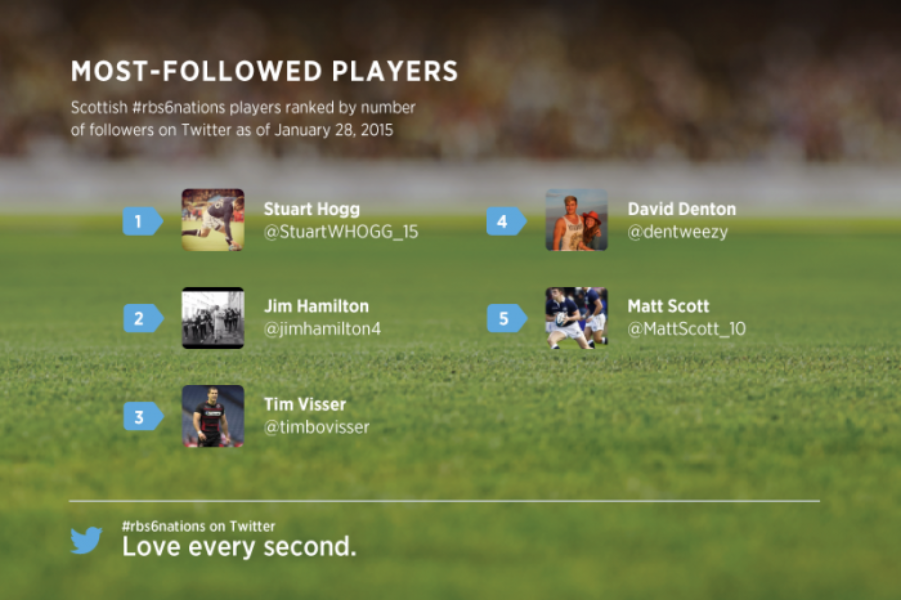 France
French fans can follow their squad through the official team account (@FFR_officiel). Here, they will find match coverage, behind-the-scenes video and photos from the locker room, and access to players throughout the #RBS6Nations tournament.

The five most-followed members of the confirmed France squad are: 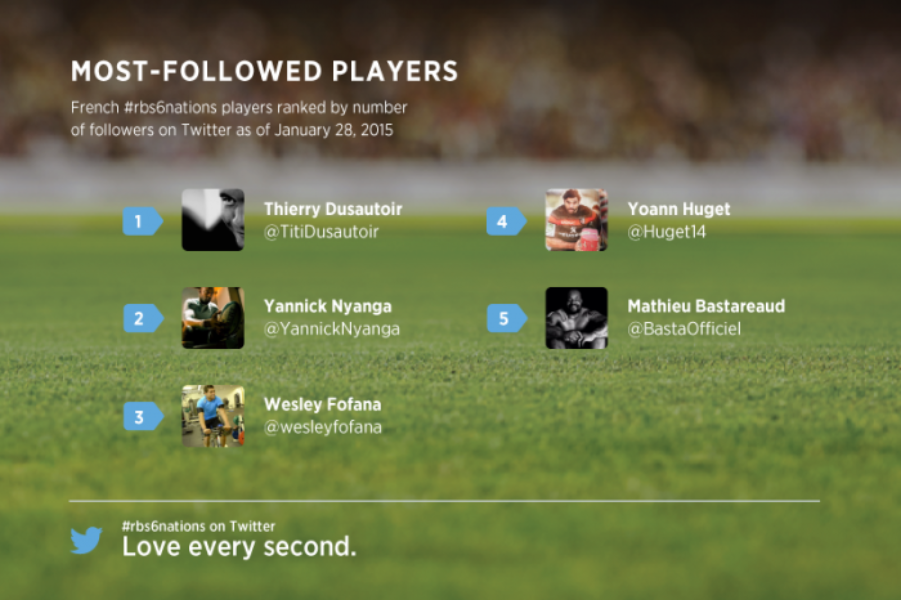 Ireland
@IrishRugby finished last years #RBS6Nations tournament on a high after defeating France in Paris to win the Six Nations for the first time since 2009. They start their Six Nations against Italy and a full list of their players on Twitter can be found here.

The five most-followed members of the confirmed Ireland squad are: 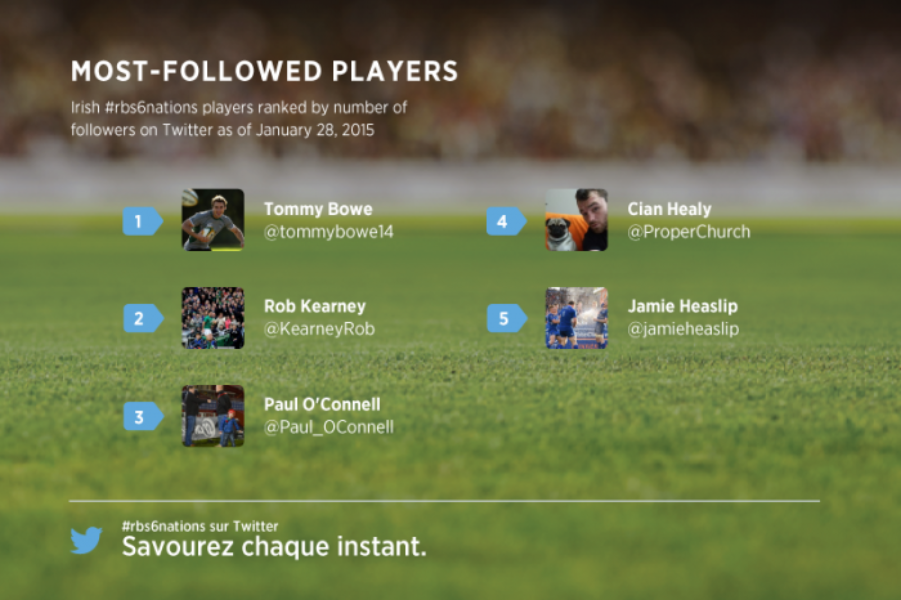 Italy
Rugby fans can follow the National Federugby official account (@Federugby). Here you will find match commentary, videos and photos from the locker room and player news during the entire tournament.

The five most-followed members of the confirmed Italy squad are: 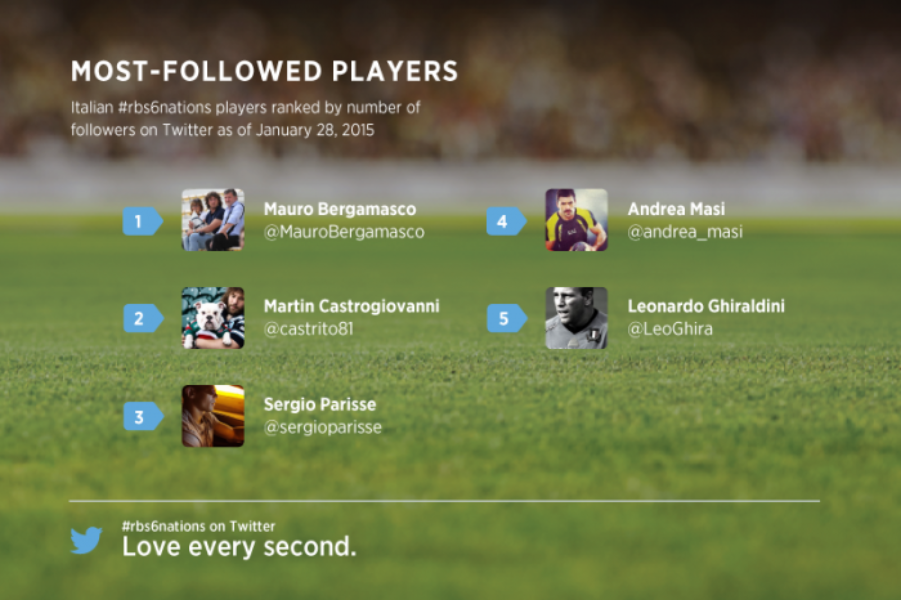 Follow on and off the pitch
Twitter users are 37% more likely than average internet users to watch rugby, according to research conducted by Global Web Index (@GlobalWebIndex)

And Six Nations broadcaster @BBCSport is celebrating that fact by launching a dedicated rugby Twitter handle - @BBCRugby. There will be live votes, via #bbc6nations and fans will be encouraged to share their pictures and videos enjoying the action using #friendlyrivalry.

The best player tweets will be integrated into the TV coverage, and there will also be behind the scenes coverage through the BBC Sport Vine account, including from within the stadium for the first time.