This week looks to be a huge one for movies, in what is shaping up to be a blockbuster year for the big screen, as ‘Fifty Shades of Grey’ (@FiftyShades) opens worldwide in cinemas and is set for $110 million global box office debut. When the trailer broke on Twitter it racked-up high levels of engagement, which formed part of the 54.5m conversations about movies on Twitter that took place in 2014*.

As noted on the Twitter UK blog this morning, since January 1, there have been more than four million Tweets relating to ‘50 Shades of Grey’, which had its premiere in London’s Leicester Square last night.

The trailer for ‘Fifty Shades of Grey’ is just one of many, that also include the new Bond film ‘Spectre’ and ‘Star Wars: Episode VII - The Force Awakens’, which have all caused a storm on Twitter as users watch and share.

However, the launch of film trailers is only one stage in the movie lifecycle that also includes pre-production news, teasers, red carpet moments and, of course award ceremonies like the #Baftas and the #Oscars. Many of these moments bring fans closer to the stars. This was highlighted recently by #AskJamieDornan as the @FiftyShades actor Jamie Dornan (@JamieDornan) took questions. These examples show how Twitter is present throughout the life of a movie and ultimately, as we recently revealed in new research, drives box offices sales.

MarketShare found that Twitter contributed to 18% of UK cinema ticket sales over a three-year period. That’s one of the key facts about Twitter and the movies that we have brought together in this infographic, which underscores the close relationship that the two have. 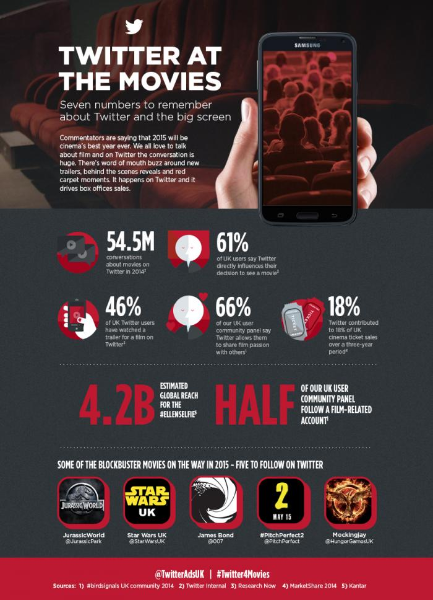