#SixNations: seven things to know about Twitter and rugby

The 2015 Six Nations (@rbs_6_nations) is almost here and rugby fans will be following all the action on Twitter. It’s the platform that is home to the drama and the passion of the tournament in what is going to be a thrilling year for rugby ahead of the #RWC2015.

To understand why Twitter is the platform on which rugby fans can be best reached, we’ve put together this compact infographic that details key stats about Twitter and rugby.

The infographic explores the huge size of the UK rugby audience, how it’s growing year-on-year and what fans value about Twitter when it comes to the sport. It also underscores why Twitter users are 37% more likely than average internet users to watch rugby, and more likely to watch rugby on TV than users of other platforms, according to Twitter research conducted by GWI.

Looking ahead, and with a nod to #RWC2015, the infographic highlights the huge amount of interest there is among rugby fans in the coming World Cup. In the year that the tournament will be hosted in cities across England and Wales, the #SixNations represents major opportunities for all brands and advertisers looking to connect with fans. 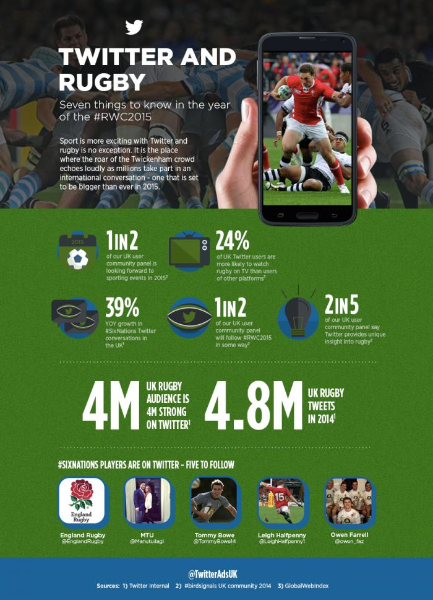