Twitter users in the UK love TV and music, and when the two came together for tonight’s #BRITs2015, it made for an explosive evening of Tweets.

In an evening in which the lyrics of the @kanyewest new single caused a stir, @Madonna took a tumble live on stage, and @onedirection were triumphant in the show’s second ever ‘social vote’, there were many moments that had viewers reaching for their phones to join the conversation.

See how the event played out on Twitter over the course of the evening with this embeddable heat map: 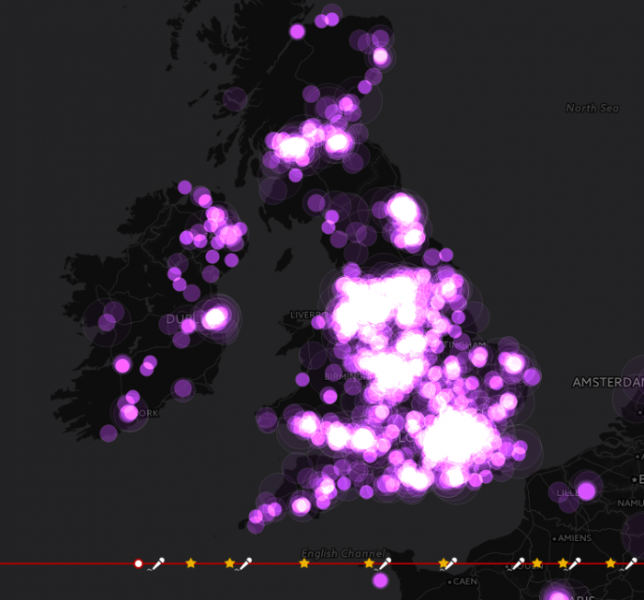 Click on the map to see if come to life, or zoom out to a worldwide view here.

Amidst all the drama, the most-Tweeted-about moment of tonight’s @BRITAwards came at 9.14pm as Kanye West (@kanyewest) performed his new single “All Day” - several parts of which were muted for TV viewers, sparking a frenzy of Tweets in reaction.

On Twitter, the top five moments of the show were:

At points throughout the evening, all of the UK’s ten trending topics on Twitter were related to the Awards and, for the second year running, fans were invited to vote during the live show with the exclusive Twitter ‘social vote’ for Best British Video. Votes were cast using the hashtags for the nominees during the course of the evening, and counted by social media agency @Spredfast:

Band @OneDirection were the winners of the award, which @SimonCowell accepted on their behalf. The band also shared their own acceptance speech on Twitter with this short video:

As people from around the world cast their ‘social votes’ on Twitter, it perhaps comes as no surprise then that One Direction were the most-mentioned act of the evening. However, they were closely followed by @SamSmithWorld, who picked up two awards during the evening, and @Madonna, whose dramatic on-stage fall generated well-wishes across the platform:

The evening also marked a return to the stage for hosts Ant and Dec (@antanddec) after a 14 year hiatus, and their on-stage selfie was one of the most Retweeted of the evening:

And as the guests headed off to after parties across the capital, the pair marked the end of a record-breaking evening with a characteristically cheeky final Tweet: