The biggest movie of the year, if not the decade so far, opens this week as “Star Wars: The Force Awakens” hits cinemas globally. The conversation and excitement on Twitter has been huge as fans have pored over the latest trailer and hunted for news on blogs and news sites.

New research highlights that not only have more than half of UK Twitter users (51%) seen “Star Wars” related content on the platform, but that 56% say that the Tweets they’ve seen has encouraged them to go and watch it.

The figure underscores how Twitter helps drives ticket sales as we revealed in research earlier this year. That research found that Twitter contributed to 18% of UK cinema ticket sales over a three-year period.

And a great many Twitter users will be going to see “The Force Awakens”. Our new research found that 82% of those who have seen a trailer or news on Twitter intend to watch the movie at the cinema. 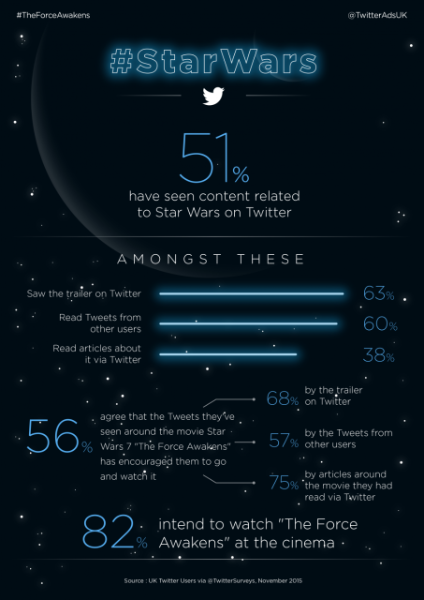