The #RWC2015 is here: 7 things to know about Twitter and rugby

With days to go before the start of the Rugby World Cup, we’ve already seen tens of thousands of Tweets as teams announce lineups and final friendlies are played. For brands on Twitter, the #RWC2015 represents a major opportunity to boost brand likeability and recommendation in the process, according to a new study.

The research, conducted for Twitter by @MeshExperience, highlights the effect that good brand-related rugby content can have on Twitter users. It points to how building a strong emotional connection with audiences can really pay off. For instance, rugby content on Twitter is 65% more effective at increasing brand likeability than other media, according to the study.

The upshot of this is that Twitter fans are 1.6x more likely to talk about the brand with friends and family after seeing rugby focused brand content.

During #RWC2015, most rugby fans will be following the games on TV; it will be the centre of attention. We wanted to find out what media types best amplify TV’s performance and drive the biggest increase in brand recommendation. What we found was that Twitter outperformed all other media with TV by 160%. It underscores how a TV ad campaign can be made stronger by combining it with Twitter.

Finally, our research also points to how Twitter has prime rugby audiences for many categories, but especially for FMCG, alcohol drinks and takeout restaurant brands. For instance, 3 in 4 Twitter rugby fans said they usually drink alcohol when watching rugby (3). More in the infographic below. 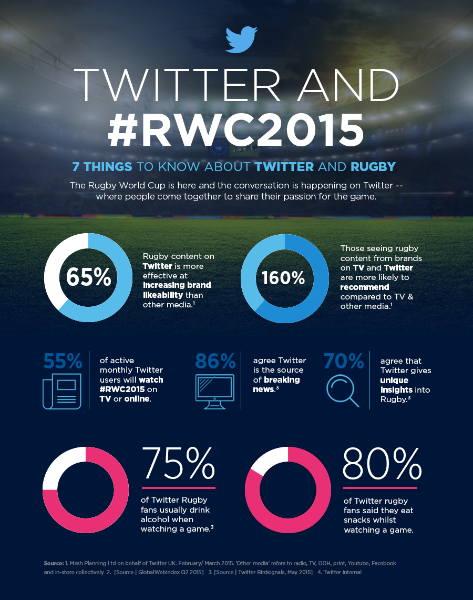