Conversation about film is huge on Twitter. It’s where anticipation, buzz and conversation around new releases builds, and according to new research, it’s increasingly the platform that can drive cinema ticket sales. 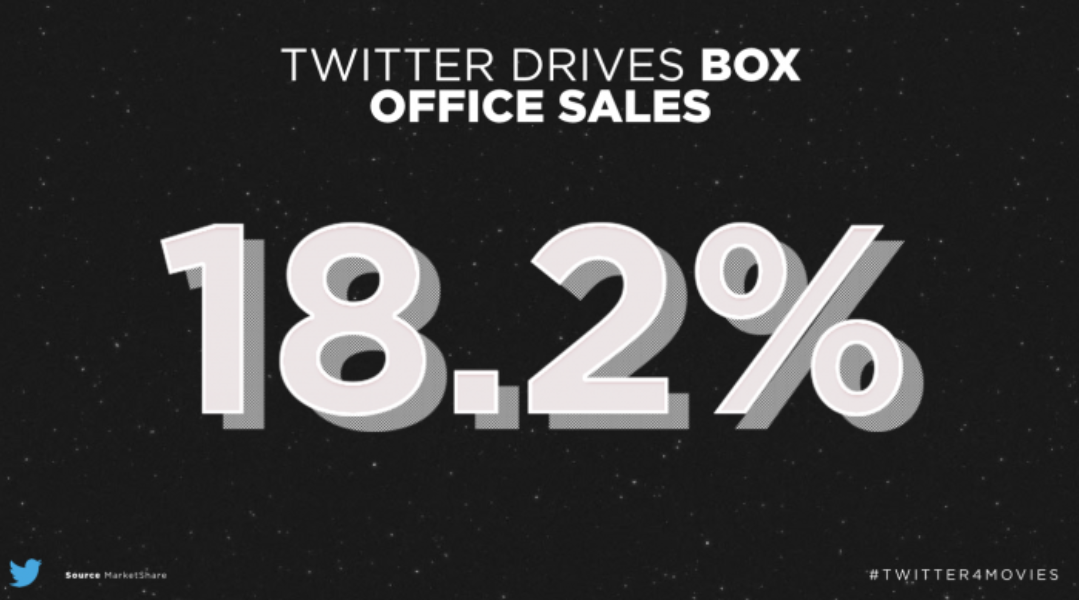 This figure represents a combination of Tweets sent by film fans about movies and Twitter advertising run by film studios and marketers.

Of those box office sales for which Twitter was responsible, the majority came from Tweets by users talking about movies, accounting for 13% of total sales. This points to the importance for film studios and marketers to monitor social buzz to deliver moments that matter to film fans.

This is borne out by other recent Twitter research by @ResearchNowUK. This found that 3 in 5 (61%) said Twitter directly influenced their decision to see a film.

3 in 5 said Twitter directly influenced their decision to see a film. — @ResearchNowUK

Delivering a return on ad spend

Speaking to this point, @MarketShareCo discovered that Twitter Ads not only play a role in influencing cinemagoers, but that they can also be highly effective in doing so. The research shows that for every £1 invested in Twitter Ads, £5.88 was generated in box office ticket sales.

The study also confirms the effectiveness of combining TV and Twitter ads as part of a film marketing campaign. MarketShare’s research shows that TV ads for new film releases produced 8% more ticket sales if the movie was advertised on both TV and Twitter versus TV alone.

Many film studios now use dedicated Twitter accounts to support new films, such as @StarWarsUK and @HungerGamesUK, and the research underscores the value these accounts can hold: “owned” Tweets from film Twitter accounts contributed 2.0% to box office sales. This highlights the benefit that film marketers can gain through running a Promoted Accounts campaigns on Twitter to help grow followers.

While Promoted Accounts are a great way to grow followers, the research also draws attention to how much more effective they are than the average ad channel in driving conversation and online search. This indicates how Promoted Accounts can be an effective awareness tool for new releases.

For film marketers, the key message from this study is the huge amount of box office value to be won in taking notice of the conversation on Twitter, which can ultimately help boost cinema ticket sales.

Furthermore, film studios that grow their follower base on Twitter are ultimately rewarded at the box office, as the following they develop is what helps build greater awareness – and ultimately, this is what drives fans into theatres.

MarketShare applied its marketing mix modelling technology to understand how marketing and other factors influence cinema ticket sales. Media spend data was collected for 50+ movie titles released in the UK over the past three years and run through MarketShare’s analytic systems. To increase the accuracy of the results, MarketShare included additional data such as movie genre and critics’ ratings. The models measured the volume of tickets sold due to each factor.