By
Wednesday, 13 May 2015
Link copied successfully

During the final week of the #GE2015 campaign, a first-time voter in Dumfries named Yasmin McDonald (@yasminxmcdonald) wondered if she’d get the opportunity to hear @NicolaSturgeon speak in person. At 14:21pm on the afternoon of May 2, she Tweeted a question to the SNP leader herself. At 14:42pm she got an answer, and an invitation:

As the campaign has unfolded over the past two months, we’ve seen countless similar moments where voters and politicians across the nation used Twitter to engage in the democratic process in ways that have not been possible until now.

For the first time in a UK general election, voters could experience the nation’s political pulse as millions of Tweets exchanging ideas, information and opinions rose and fell during the campaign’s biggest moments.

The authentic conversations, transparency and personal access voters came to expect from politicians on Twitter during the campaign will be a vital tool as new MPs and the public engage about the challenges facing the nation.

Just after election day, both victorious and ousted MPs individually Tweeted thanks to their thousands of supporters:

As new MPs head to Parliament, voters were given a window into their first week on the job:

And now we are already seeing voters and MPs engage about priorities for the new government:

And, of course, Prime Minister David Cameron (@David_Cameron) has been making good use of Twitter to announce his cabinet appointments and the #reshuffle. He even used Periscope (@periscopeco) to broadcast his first speech live the morning after the election: 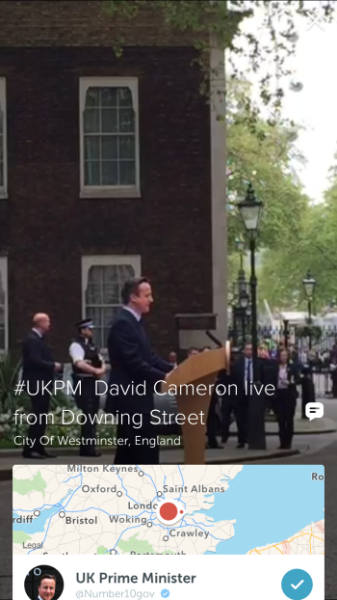 Every day, people use Twitter as a tool to simplify and improve the process of communicating with their local government and emergency services:

For citizens who feel disengaged from the democratic process and distant from those who represent them, Twitter is a powerful tool to engage people with the political issues that directly affect them. In one elected MP’s own words: