8 things Twitter users told us about the iPhone launch

It’s the first week of September and that means a new Apple iPhone is on the way. There have been millions of Tweets about the iPhone in the past month as journalists and consumers speculate about what it might deliver. We’ve conducted new research* that highlights what people are most looking forward to.

The iPhone features you want

The top three features that Twitter users who took part in our study would like to see are longer battery life – cited by 81% – water resistance and more storage.

If users could have any feature on the iPhone (blue sky future thinking) they wouldn’t mind a time machine, a hologram projector and better Siri…possibly as a hologram.

Whatever features people want from a new phone, there’s one thing that our users agreed on: 65% agree Twitter is a good way to find out about rumours in tech. Furthermore, 57% agree that the platform is the best place to keep up with breaking news in tech. Watch this space. 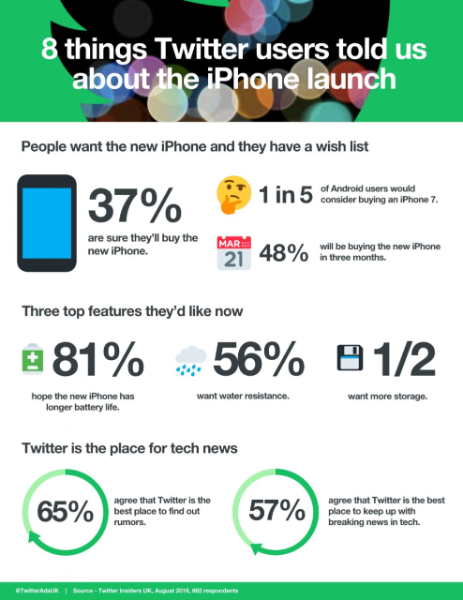