June has been an emotional rollercoaster. The highs and lows of England in the Euros, the beauty of Pride weekend and then Referendum tensions. We’ve all flocked to Twitter for each piece of breaking news, each match and each piece of analysis. Twitter is your live connection to what’s going on in the world, and boy oh boy, has there been a lot going on.

In this month’s blog, we’re showing how brands got involved in these conversations.. Perhaps next month we’ll see Old Spice Man being put forward to run the country. There’s a gap in the market…

We all remember Paul The Octopus, predicting the 2010 World Cup scores. RIP Paul. The #Euros2016 is all about Henri, Google’s score-predicting cockerel. Live on Periscope, Henri can #PeckTheWinner by selecting a bowl of food. It’s a proper best-in-class Periscope. The set is stunning, and even features live props for Henri to play with.

LIVE on #Periscope: Who will win tonight? England or Iceland? Henri to #PeckTheWinner #ENGICE https://t.co/jRPGKBDHDu

Unlike the England team, Mars have been brilliant during the Euros. @MarsFootball has been documenting the journey from group stages to the knock-out from Iceland.oal by goal, kick by kick, they’ve been there.

Hellman’s have partnered up with the ultimate king of the grill, DJ BBQ, to make this stunning Promoted Moment, packed with great video. Oh blimey, it looks good

A whopping 73% of Twitter users are interested in football. Even more so during the Euros. @Art_of_Football creates incredible illustrations of matches, including this wonderful gif of @GarethBale11 for Adidas UK.

There were truly beautiful moments during this year’s Pride, including a police officer proposing to his boyfriend and our first British Muslim Mayor addressing the crowds. Brands including Clinique and Smirnoff got involved with the brilliant spirit of the weekend with many using the Pride hashtags #LoveIsLove and #LoveWins.

Does anybody else think of a-ha’s Take On Me video when watching this? This month BetStars used Conversational Video to get fans debating historic football moments. Simply choose your side and tap to Tweet your support. Really easy and a great way to get fans talking. 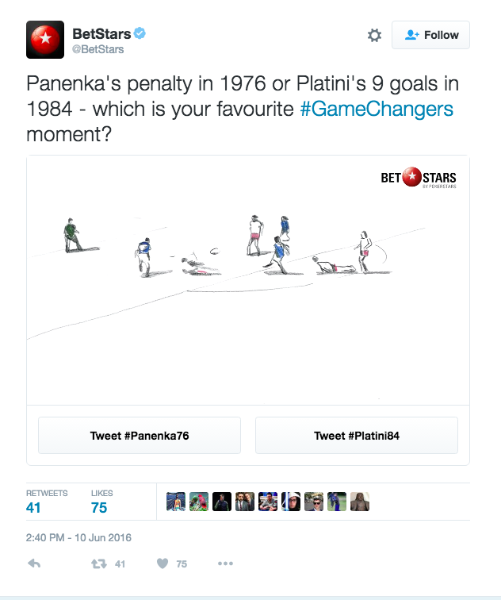 Always continue their brilliant #LikeAGirl campaign with a great film about girls in sport. Half of girls quit sports, usually down to a lack of confidence in their teens. It goes without saying that this has to change. The film is fantastic, and the addition of the Conversational Video button makes it really simple for people to Tweet out their support.

Damn work and family getting in the way of football. Always there, needing stuff, needing you. The Sun has you sorted. Simply Tweet #work or #family and they’ll generate an excuse for you to get out of obligations. Sneaky.