From festive ads, to TV and food: How to plan for Christmas with Twitter

Twitter is all about what’s happening – and come November and December, Christmas will be taking over conversation on the platform. As a time of traditions and rituals, this means we can learn from – and plan around – this mass of festive conversation that takes place every year.

For many, the first Christmas ad signals the start of the festive season, and Twitter users go mad for them. As many as 57% of users recall branded hashtags from last Christmas, and 7 in 10 look forward to Christmas ads.† They drive masses of conversation – over 1.1M Tweets in 2015. No surprise that John Lewis’ #ManOnTheMoon ad with over 300K Tweets drove the most conversation, followed by Coca-Cola’s perennial favourite #HolidaysAreComing with 76K, and then Sainsbury’s ad #ChristmasIsForSharing at 62K.

One of the first milestones in our Christmas schedule is when the lights go up, which our panel of Twitter users rated the number-one thing that helps them get into the Christmas spirit.† This conversation peaked on November 19.

It’s when we reach 1st December that the conversation really takes off. It’s here we see the most dramatic spike of any Christmas conversation, as we finally rip into our advent calendars – prompting almost 110K Tweets. In all, it provides the biggest day of conversation about traditions and rituals besides Christmas Day itself. 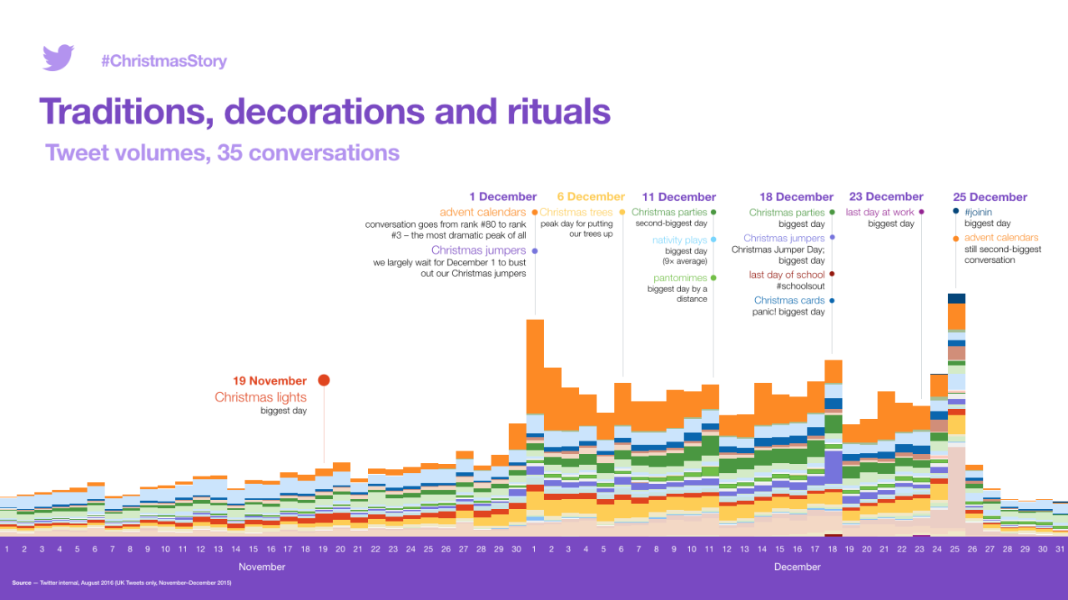 Conversation about Christmas trees more than doubles between 26–30 November — leaping from 6K to 14K Tweets per day leading to the first Sunday of December, when our trees go up. The second and third Fridays of December are hugely significant. Conversation jumps to 9x average levels on December 11, as we enjoy a nativity play or a panto. And the next Friday, it’s about Christmas jumpers and letting loose at the Christmas party. 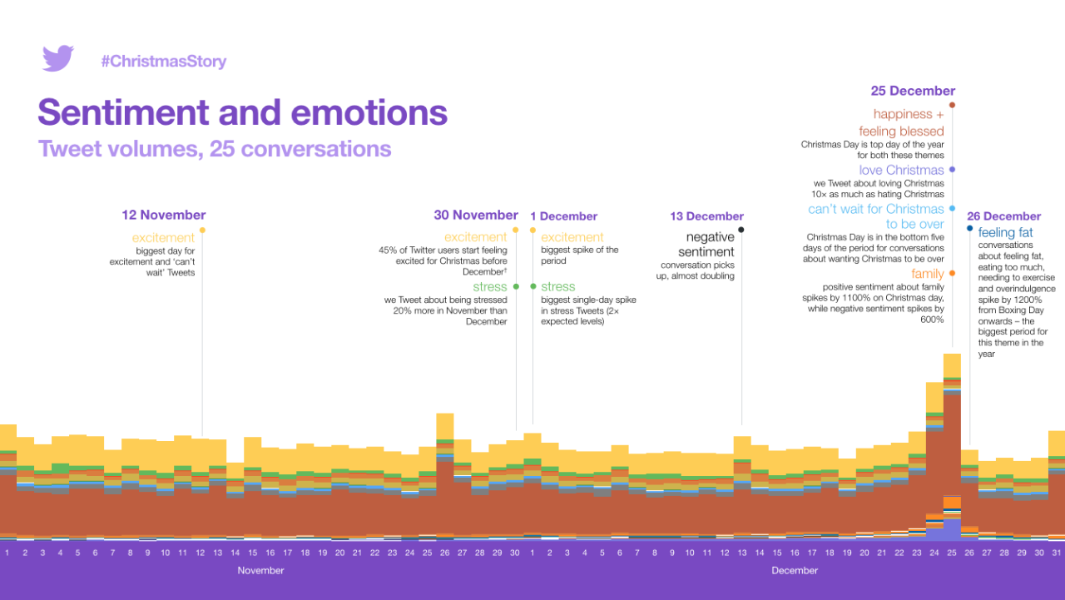 We Tweet about loving Christmas ten times more than we Tweet about hating it. And even when we look at Tweets about family – sometimes a source of holiday tension – positive sentiment spikes by 1100% on Christmas Day.

Twitter users see food and drink as the most integral part of their Christmas,† meaning it just wouldn’t be Christmas without seriously overindulging. By Tweet volume, Christmas Day is the third-booziest day of the year behind New Year’s Eve and New Year’s Day.

By looking at the topics which spike the most from their typical levels, the ideal Christmas meal would be pigs in blankets with a side of brussel sprouts, followed by a Terry’s Chocolate Orange with lashings of brandy butter, and washed down with a glug of buck’s fizz and a cheeky schnapps. Classy. And of course, turkey and leftovers. There are more Tweets about turkey from 26–30 December than on Christmas Day itself. 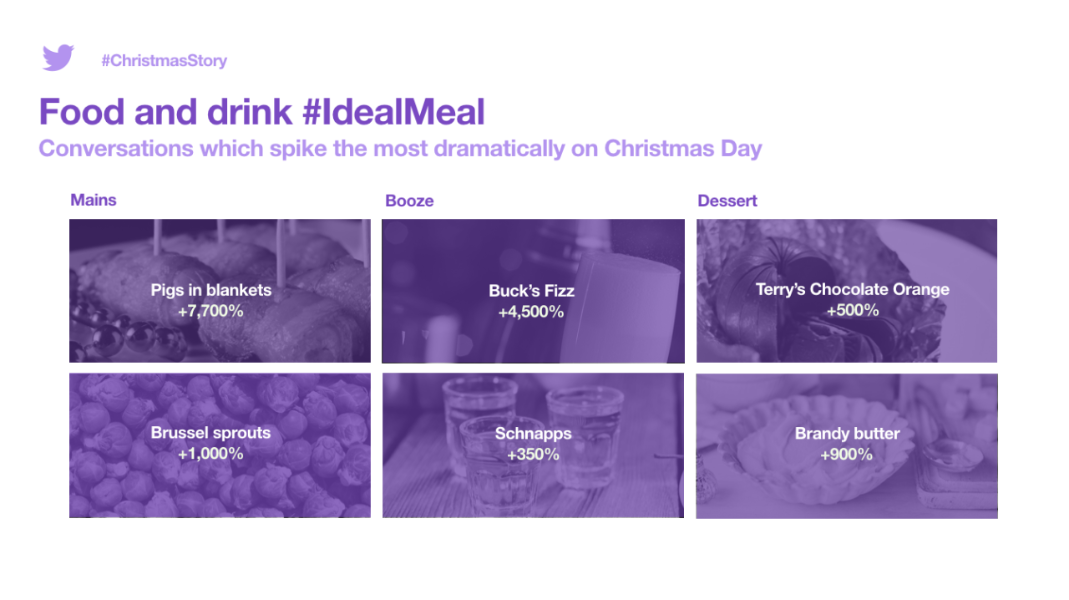 Movies are a huge part of Christmas, and Twitter users rate watching Christmas films as amongst the top five activities which get them most in the Christmas spirit.† Twitter data gives us a unique way of understanding which films mean the most to us.

Home Alone was the most Tweeted-about Christmas film of the year with 137K Tweets, seeing at least 1,000 Tweets every day during the period. It was so popular that it ranks as the third most talked-about movie during November and December, even when including the huge cinema releases of the period. Twitter data is revealing new Christmas classics with Elf (62K Tweets), Love Actually (60K Tweets) and quintessential anti-Christmas-movie-Christmas-movie Die Hard (33K Tweets).