From the racetrack to the catwalk: 11 creative wins on Twitter from Europe

In this month’s round-up of Europe’s most creative Twitter ad campaigns we have the first examples of brands using stickers, great use of emojis, Vine, a lot of great video as well as Moments to highlight the power of brand storytelling.

The French bank La Banque Postale (@LaBanquePostale) decided to help people finding their next job with a creative campaign based on emojis. People simply had to Tweet an emoji for their particular field, location and diploma to automatically receive job offers matching these criteria.

This month Warner Bros France (@warnerbrosfr) became the first brand in France to use Promoted Stickers for a launch. It used stickers to help it promote the release “Les Animaux Fantastiques (Fantastic Beasts and Where to Find Them)”. Stickers provides an easy way to inject some additional fun into creativity on Twitter.

Lufthansa
To kick off its newly launched branding campaign, Lufthansa (@Lufthansa_DE) used First View to make sure its “CEO Wilson” video was seen by the widest possible premium audience on Twitter. It supported this with website cards using engager retargeting help to drive qualified traffic to the dedicated landing page.

Henkel
As part of the celebrations for its 140th birthday, @Henkel turned to Twitter and Moments with the hashtag #Henkel140 to tell the different aspects of its unique brand story. This included Moments on particular brands like Persil , its historic approach to advertising and sustainability among others. It promoted these to its target audience in the US, UK, Germany and GCC countries, as well as running a Promoted Trend in Germany to support these Moments.

Mercedes-Benz Formula 1
To support its F1 team during Italian Grand Prix, @MercedesBenz_IT launched two custom emojis representing the faces of drivers @Nico_rosberg and @LewsiHamilton with #GoNico and #GoLewis. The emojis also took on physical form for the first time with emoji masks, which were used both on Twitter and live in the autodrome in Monza.

Nico showed his love for his custom emoji. And both Rosberg and Hamilton asked users to Tweet their own emoji to show support. There was also a Scratchreel for people to have fun with. Finally, @MercedesBenz_IT held a live studio to support the live Tweeting strategy around the race.

Renault #NuovaScenic
Renault launched the new Scenic at the 73rd Venice International Film Festival presenting a modular short film called “Nyngyo”: the first multi-story inspired by the first multi-space car. The day after the premier @renaultitalia gave users the chance to make their own version of the story through a multi - conversational video with auto-reply. After the first choice users received a Tweet from @renaultitalia with a new conversational asking them to pick their second piece of content. At the end they received a Tweet from @renaultitalia with the video created through their choices (and a link to discover all the possible outcomes on the dedicated website). 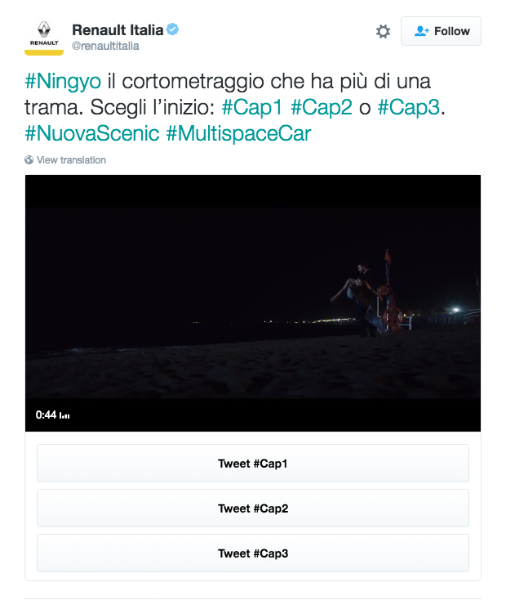 DisneyPixar #Finding Dory
Aiming to generate excitement around the launch of #FindingDory (#AllaRicercaDiDory) in the Italian cinemas, @DisneyPixarIT created a special Twitter Moment with exclusive content.

On the third Tuesday of September people turn to Twitter to check on #Prinsjesdag. This is the day where the King sets out the main features of government policy for the coming parliamentary session. It’s an important day for financial institutes and also for Twitter. @ABNAMRO bank made sure it owned the conversation on the day by turning to First View. The video that accompanied the campaign was designed to raise awareness for the live video stream where people could ask all their financial questions and get an easy to understand answer.

The biggest debate in the European Parliament happens annually on 14th September. The
European Parliament used Twitter to drive awareness of this debate, which sets the direction of the EU for the months ahead. To do this, it used First View and promoted video to direct people to the debate’s live stream. After the debate, a Moment of the highlights was created and promoted to further raise awareness and educate EU citizens.

Concerned about the EU and its future? Follow Wednesday’s debate on the State of the EU #SOTEU ↓ pic.twitter.com/0ruaYa8v0a

Ford (@FordSpain) has pioneered our new Moments format in Spain. It used this storytelling tool to showcase the limited edition of the Ford Eco Sport, which was launched and promoted in partnership with the sunglasses brand @HawkersCo. This Moments collection is made of Tweets from brand ambassadors, creating an unique user experience.

step by step.
i started posting pics for sunglasses.

Twitter is the home of live events and @Desigual knows it. That’s why it used the new Promoted Periscope format for broadcasting behind the scenes and catwalk footage of the brand’s New York Fashion Week show. This allowed it to attract an audience of more than 230K fashion lovers. @Desigual further boosted conversation with a Promoted Trend #DesigualNYFW in Spain and Italy, with a support campaign in France too.

You can also catch up with with last month in our European creative reel, giving you all the creative campaign Tweet highlights in 50-seconds.

Watch the best creative campaigns from around Europe in our latest round-up video pic.twitter.com/QrVcxkCjRv