Getting ready for #Rio2016 and connecting with fans on Twitter

The lasting glow of London 2012 is helping fuel the excitement and Twitter conversation as we edge closer to the start of the Rio 2016 Olympic Games.

The Olympics, as we experienced first-hand in the UK, bring people together. They generate a huge conversation that takes place on Twitter, which provides the live connection to sport that so many enjoy. That was one of the findings that emerged from a research study conducted for Twitter by Research Now. It found that 78% of Twitter users agreed that the Olympic Games bring people together, partly because the Games are more than just a sporting event.

Many of those people will come together in front of their TVs, where they will dual-screen to join the conversation, as they watch the dramatic sporting action unfold. The study found that 87% of Twitter users intend to watch the Games on TV or online.

There are huge opportunities for brands during the Games, to get involved and share great stories with consumers.

31 days left till #Rio2016! Join @TeamGB in the countdown with this video, featuring highlights from the #RoadToRio so far. 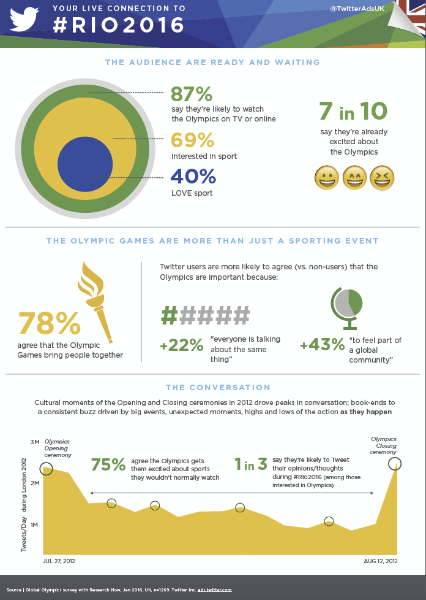