It’s awards season and the biggest night in the UK music calendar, The #BRITs 2016, will kick off at the O2 and on Twitter tomorrow night.

Music fans connect with each other and the artists they love all year round on Twitter. During live events such as the #BRITs users come to the platform to see the real-time conversations between artists, presenters and the viewers at home that only happen on Twitter.

This year fans can get closer than ever before, with @brits introducing exciting new ways for fans to engage with and have a direct impact on the awards via Twitter:

As the world’s love for emojis shows no sign of slowing down, their impact on Twitter is even more special for fans when they can use them to express their love for their favourite artists.

This year bespoke emojis have been released exclusively on Twitter for all performing artists and presenters at the BRITs, with an amazing addition of the trophy on Wednesday. Tweet using the performer and presenter hashtags below to see your favourite emojis in action: 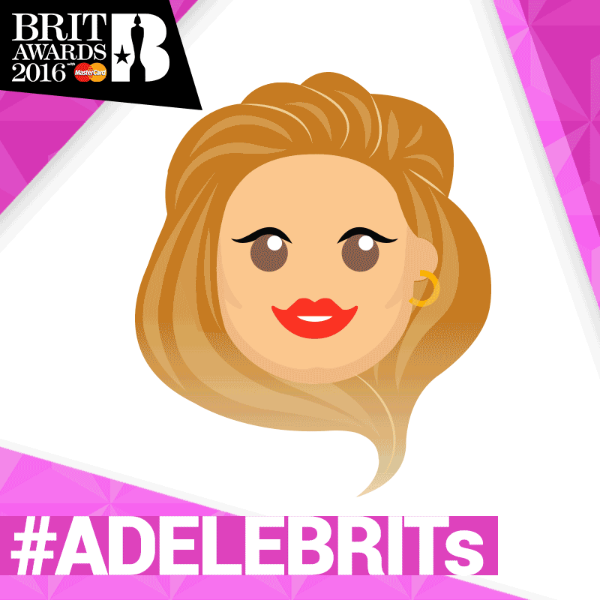 For the third year in a row, the winner of British Video will be based solely on votes cast by fans on Twitter. A long list of ten nominees has been whittled down to the final five @Adele; @edsheeran; @JessieJ; @LittleMix; @OneDirection.

In a new addition for 2016, fans were also given the power to decide the winner of British Breakthrough Act. Each nominee, @thebottlemen; @jamesbaymusic; @jessglynne; @wolfalicemusic; and @yearsandyears, had their dedicated hashtag exclusively revealed on the @ClaraAmfo BBC Radio 1 show last week.

Both winners will be announced live on air by @antanddec on Wednesday night.

Music has been part of Vine’s culture since the beginning. Fans use Vine to discover and engage with music alongside a huge community of creators.

In a UK Awards first, the BRITs will have its very own Vine channel for the night - showcasing Vines from artists, fans and the audience at home. Any Vine user across the globe will be able to simply tap into a special tab within the app and enjoy exclusive #BRITs content.

Look out for loops from top UK Viners @LeslieWai and @AntoSharp.

With the 2016 BRIT Awards just a day away, we can reveal how much global conversation there has been about tomorrow’s live performers.

In the past year, fans of Justin Bieber and Rihanna alone have generated nearly half a billion Tweets: 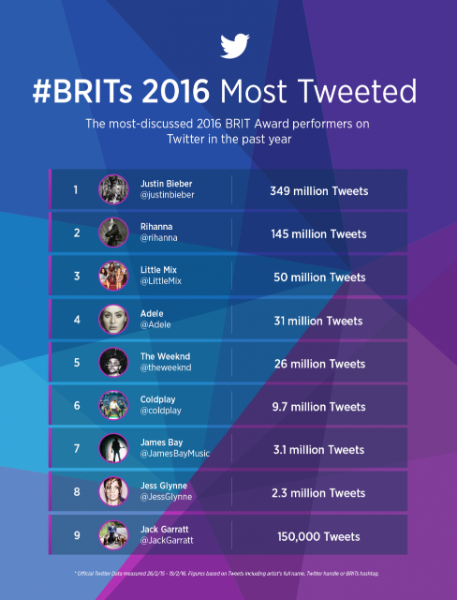 Jess Glynne and Jack Garratt might be trailing behind globally, but their popularity closer to home is remarkable. Out of the 9 performers, they have the highest % of total conversation coming from the UK:

This highlights the increasing trend of up and coming, homegrown music talent dominating Twitter conversation within the UK.

Whoever you’re supporting, Twitter will be the place to have your say on the biggest night for British Music. Check out this Twitter list which includes all performers and hosts, and make sure you don’t miss a moment.