#TimetoShop: 12 stats about shopping in the run-up to Christmas

The #BlackFriday and #CyberMonday conversation is huge on Twitter. The two shopping days are a growing part of the long buildup to Christmas as consumers hunt for bargains and get their gift shopping underway.

As the majority of people on Twitter in the UK start their Christmas gift buying well before December, they look to Twitter to see what’s happening around the #BlackFriday and #CyberMonday sales.

Check out our research infographic below and you’ll see that people on Twitter in the UK are more aware of the sales taking place around #BlackFriday and #CyberMonday than others.

They are also considerably more likely to shop during these big sales events than people who aren’t on Twitter. And the same goes for #BoxingDay. People on Twitter in the UK are 33% more likely to participate than those not on the platform. 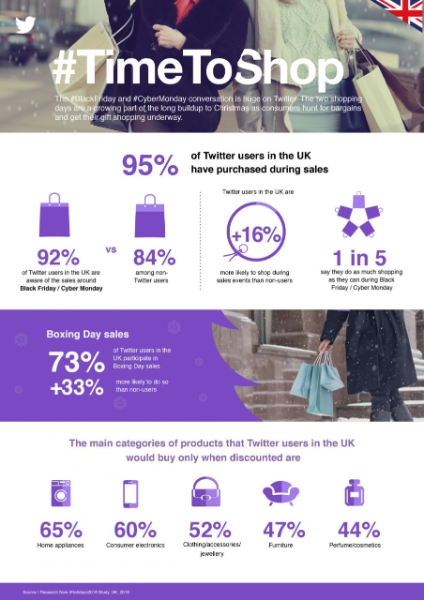 Get the PDF here.