Twitter is your live connection to all the Olympic action

The Rio 2016 Olympic Games are about to get underway and throughout the tournament people will be turning to Twitter to get the latest news and hear what others are saying.

Twitter is ranked no. 1 for being the most up-to-date digital platform when it comes to a live connection to sport. That was one of the findings that emerged from a research study conducted for Twitter by Research Now.

As many as 82% say they’ll be following general news accounts on Twitter to get info related to the Olympics. The study found that not only is the latest news on Twitter, but more than 70% of those surveyed strongly associate Twitter as a platform that provides an expert point of view. Twitter also ranked higher as a platform that provides a unique perspective, and is ranked the most timely of all platforms.

Enhancing how we watch the Olympics on TV

Whatever the live event, Twitter enhances people’s experiences. So when we tune in to watch the action from Rio on TV, the majority of Twitter users will be dual screening. Our study found that seven out of ten say that they enjoy watching sports on TV more when they use Twitter at the same time.

Brands can have fun during the Olympics

The Olympics are a huge opportunity for brands. It’s worth remembering that users on Twitter are looking to be entertained and have fun. Our study found that 52% agree that they see brands doing cool things on Twitter.

As you get ready to launch your brand’s Olympic campaign on Twitter make sure you connect these insights with creative that speaks to people’s emotional connection with the Olympics. Think about joining the conversation in real time on Twitter starting on 5th of August – along with millions of people around the world. 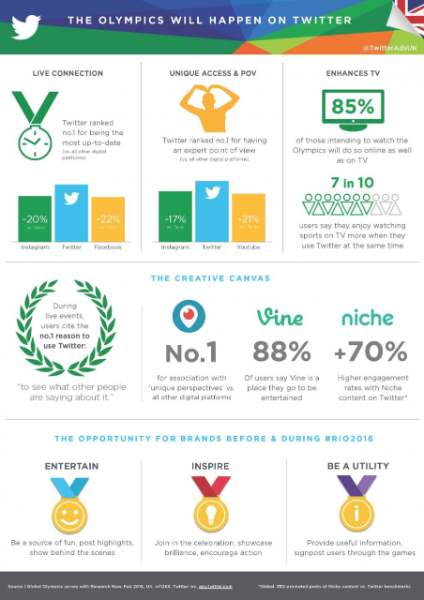