As Fashion Week happens in London, it’s happening on Twitter. As we saw most recently during London Fashion Week #SS17, brands bring the full force of their style and creativity to the platform. They use Twitter to give people sneak peeks, front-row seats or backstage access – live and in real time.

And people love it. Season after season, they come to Twitter to see the latest looks from #LFW, discuss the trends and share their favourite styles.

In anticipation of #AW17 we asked @Nielsen to find out more about the fashion audience on Twitter. We found that Twitter users are not only more likely than others to be interested in fashion, they also look to influencers for their style and buy on-trend clothes.

Twitter users are 38% more likely to pay attention to London Fashion Week than non-users. And as many as 76% of our users are interested in fashion and are tuned into trends. And while 35% of the Twitter fashion audience finds inspiration in family, friends and people-watching, 43% look to influencers such as models and designers.

The numbers suggest that the conversation around #LFW and other fashion highlights on Twitter is part of a path to purchase. 70% of Twitter’s fashion audience is happy to spend their money on fashion. And Twitter users are 75% more likely than non-users to buy clothes that are on trend.

Have a look at the infographic below for the full details, and then feast your eyes on #LFW from 17-21 February. 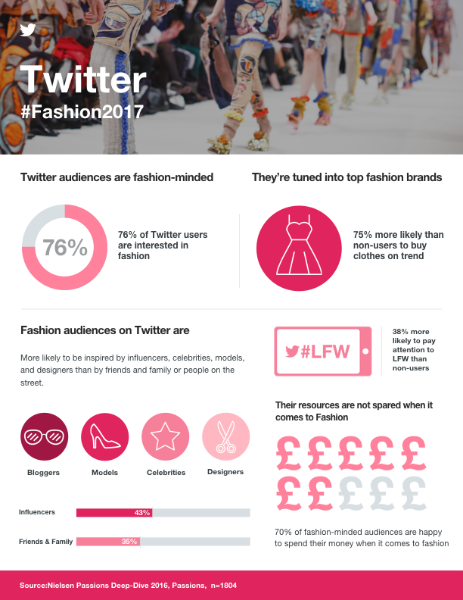