Since Black Friday and Cyber Monday became a permanent fixture on the British retail calendar, Twitter has played a massive part in the hunt for deals.

This has been borne out in the latest Twitter-commissioned research on attitudes towards the shopping period among its Twitter Insiders group, our community of people who use Twitter(1).

It found that Black Friday and Cyber Monday are popular with people who use Twitter with a significant number using the platform for finding deals.

The research found that 38% of Twitter Insiders were actively interested in picking up Black Friday or Cyber Monday offers.

And when it comes to searching out deals, 36% agreed Twitter is a great place to find them. While 23% will seek them out directly from a brand’s Twitter feed. 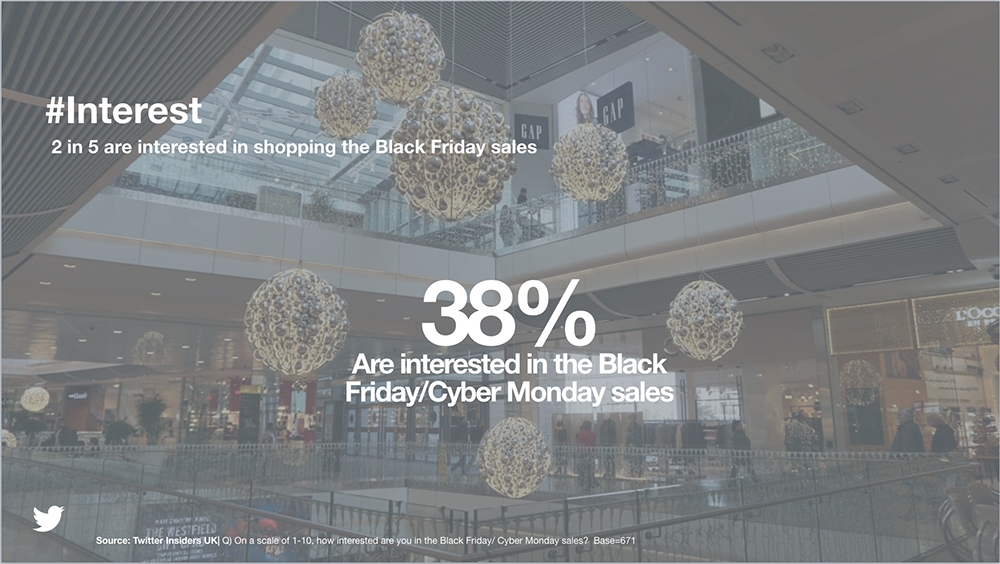 People are more likely to spend on themselves

Despite the proximity to Christmas, the majority of Black Friday shoppers are looking for deals for themselves. At the same time, 50% of them are also in the hunt for bargain presents.

There is no fixed budget in mind when it comes to spending among Twitter Insiders. Meaning, they are likely to be swayed by an amazing deal.

This is borne out by research findings on Twitter Insiders’ attitudes to Black Friday/ Cyber Monday. It found that 53% felt it was an opportunity to make more significant purchases.

When it comes to the types of purchase people were looking to make, there are three clear category winners.

The top categories are clothing, tech (big and small), and beauty and grooming products.

Clothing was the most popular category, with 85% of Twitter Insiders planning to buy something for themselves, compared to 47% for a partner, and 33% for their children. 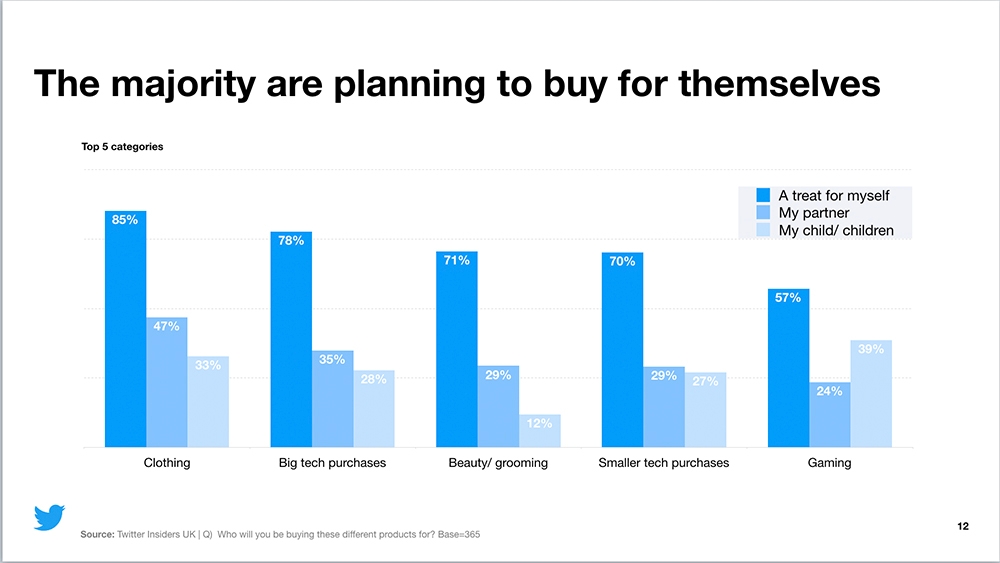 People don’t have a budget planned, but according to the research, many see Black Friday/ Cyber Monday as an opportunity to make a big-ticket purchase.

Overall, 53% of respondents agreed Black Friday and Cyber Monday were a time to make a big purchase. In terms of age groups, 18-24s and 25-34s with 63% and 58% agreed with this respectively.

So, if whether you’re looking to reach consumers, or find a Black Friday/ Cyber Monday bargain Twitter is the place to go. Both to find a present for someone else or yourself.