2013 was the year that cricket legend Sachin Tendulkar (@sachin_rt) said goodbye to the sport, Bollywood reached new box office heights, and the nation rallied around the people of Uttarakhand during a time of great need.

I am really touched with #ThankYouSachin messages. Your support all these years have inspired me to give my best.

To mark the end of the year, we discovered what got people in India, and around the world, tweeting in 2013 and created our annual ‘Year on Twitter’ roundup.

In 2013, people in India used Twitter to discuss sports, politics, television and news events that were both local and global.

The country loved tweeting about cricket this year, with some of the top trends including #ThankYouSachin, #IndvsAus and #IPL.

ODI World Cup. World T20. World No. 1 in Test cricket. Champions Trophy. World’s No. 1 ODI side. All of this under MS Dhoni’s watch.

Twitter also provided the second screen for TV fans as they tweeted along in real time, sharing thoughts with fellow viewers across the country. Programmes such as #BB7, #ThePerfectBachelor and #KoffeeWithKaran ranked highly.

#KoffeewithKaran starts tonight at 9pm on @StarWorldIndia..@Beingsalmankhan is our first guest and a very special segment with Salimsaab!!!

It is also the place people turned to discuss breaking news, from international events in Syria and Egypt, to the devastating Uttarakhand Floods and Cyclone Phailin.

Very heavy rains and insane wind outside in Bhubaneswar. Whatever happened to it dissipating at the 6 hour mark after it hits the land?

Trending topics help Twitter users discover the hottest emerging topics people are talking about as they break, rather than the total volume of conversation about a topic, making the platform a great place to keep current with the latest events and news. The below lists show what captured the country’s attention for much of 2013. 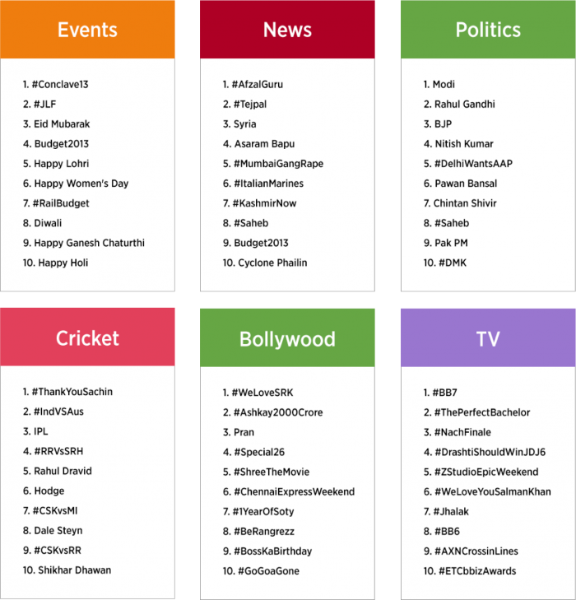 If you’re not on Twitter, there couldn’t be a better time to sign up. Download the app or sign up at twitter.com and start following the accounts you want to follow. And to relive more of the biggest moments from around the globe this year, head to 2013.twitter.com.