By
Thursday, 15 May 2014
Link copied successfully

In a nine-phase vote that spanned six weeks, with millions exercising their right to vote, what does a “Twitter election” look like? It looks like this: more than 56 million election-related Tweets from January 1 this year until May 12, when the polls ended.

And it looks like this: Each of the poll days saw between 5.4 lakh and 8.2 lakh election-related Tweets. To put this in perspective, in the 2009 elections, there was just a single active politician with 6,000 Twitter followers. This Lok Sabha Election, Twitter became the medium of choice for people to engage in and consume political content. Take any metric: original content generated, engagement by political leaders, user engagement with content, news breaks, influence on political discourse or capacity to set media agenda — it happened on Twitter.

Our data science team analysed the amazing impact the Indian Twitter user has had on this mammoth election. This is what millions of your elections-related Tweets look like, when time-lapsed for the whole election starting April 7 and ending on May 12! (click map to play 30 second video) 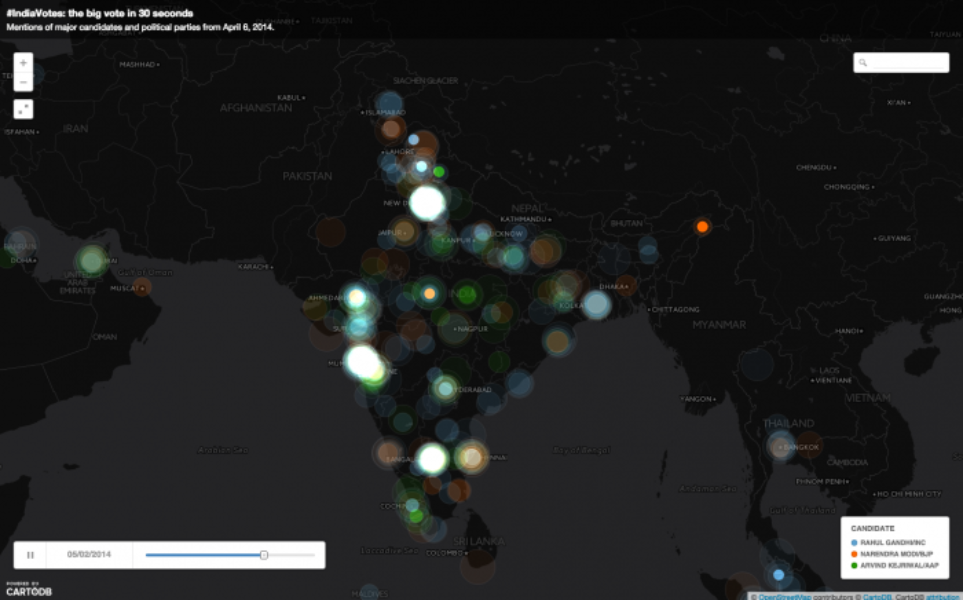 These maps give you a fair idea of the conversation and interest levels around @AamAadmiParty’s @ArvindKejriwal, @BJP4India’s @NarendraModi, Rahul Gandhi and @INCIndia and what geographies saw the most conversation about them and when.

What has this meant for the main political players? Not surprisingly, @NarendraModi has reached 3.97 million followers growing his follower base by 28% percent since Jan 1. Not to be outdone, @ArvindKejriwal has raced to 1.79 million, an amazing 79% growth from the start of the year.

@AamAadmiParty has grown to 682K followers registering a 119% increase since the beginning of the year, a very active @BJP4India has reached 491K followers, growing at 70% and late entrant @INCIndia at 178K followers has grown at an incredible 376% starting with just 37,357 followers on Jan 1.

As we analyse the high-intensity election period among political parties and the leading candidates, this is how the conversations around the parties and their leaders took place on Twitter from April 7 to May 12.

Zooming into the details, this election some saw brilliant Twitter-first content being posted by leaders cutting across party lines.

Here’s a collection of the top 10 most-retweeted Tweets this election. Not surprisingly, @Sachin_rt hits this one out of the park.

Here are the rest:

Indian news organizations and other media partners used Twitter in novel ways to analyze data, source content, distribute Tweets, engage audiences and more, all of which made Twitter the go-to place for everything politics this season. For TV, Twitter became the default second screen for election coverage, while web and print outlets used Twitter for breaking news and sourcing quality content. Twitter integrations pioneered by media outlets like Times of India, Times Now, Headlines Today, CNN-IBN, NDTV, CNBC TV18, Hindustan Times, Indian Express, DNA and many others made the experience an immersive and interactive one. In addition, the iElect App, created by Tata Consultancy Services in partnership with Twitter, put Twitter election data in the hands of Indian voters for the first time.

Here is an overview of some of the best Twitter integrations led by Indian news organizations, with Times Now leading the pack with a dedicated Twitter Election Center.

In a Twitter first, on counting day May 16, users tweeting to @NDTVElections with the #Raceto272 hashtag, will get real-time election results in response. These response Tweets will contain an infographic representing the latest party/alliance position.

The response from our users has been phenomenal. Users have been delighted and media partners have seen growth and engagement (especially on mobile). Being on Twitter these past few weeks has meant having a front row seat to the Lok Sabha Election.

Stay tuned here for updates on how this Friday’s Counting Day transpires on Twitter!