Voting for Lok Sabha #Election2014 in India begins today in what has truly been the country’s first Twitter election. Candidates, journalists and citizens have been using the Twitter platform extensively to discover elections content, converse with others in real time, and express their views.

For months, candidates for office have been using our platform to break — and unbreak — news, answer questions, post selfies, Vine campaign videos and find other meaningful ways to connect with their constituents.

Here are just a few examples of what we’ve seen so far:

This activity has led to a surge in the election conversation on Twitter; in the last year alone, there has been a 600% increase in the volume of conversation in India around the 2014 elections. Based on our research, mentions of political parties and candidates alone have shot up by more than 10 times since the start of the year.

Voting for Lok Sabha #Election2014 in India begins today in what has truly been the country’s first Twitter election.

As election fever mounts across the country and Twitter continues to be the go-to place for everything politics this season, you’ll find a variety of ways to enjoy an immersive, interactive experience on Twitter. A wide range of news organizations have pioneered groundbreaking uses of the Twitter platform, growing and engaging their live, mobile audiences in the process.

Beginning today, you can now engage with all your favourite shows on @timesnow with Twitter as the second screen for television. @timesnow is using a comprehensive set of Twitter data and tools (including those powered by @Wayin and @Frrole) to visualise local and national conversations, to empower you with the ability to ask critical questions, to break and share news in more compelling ways, and more. 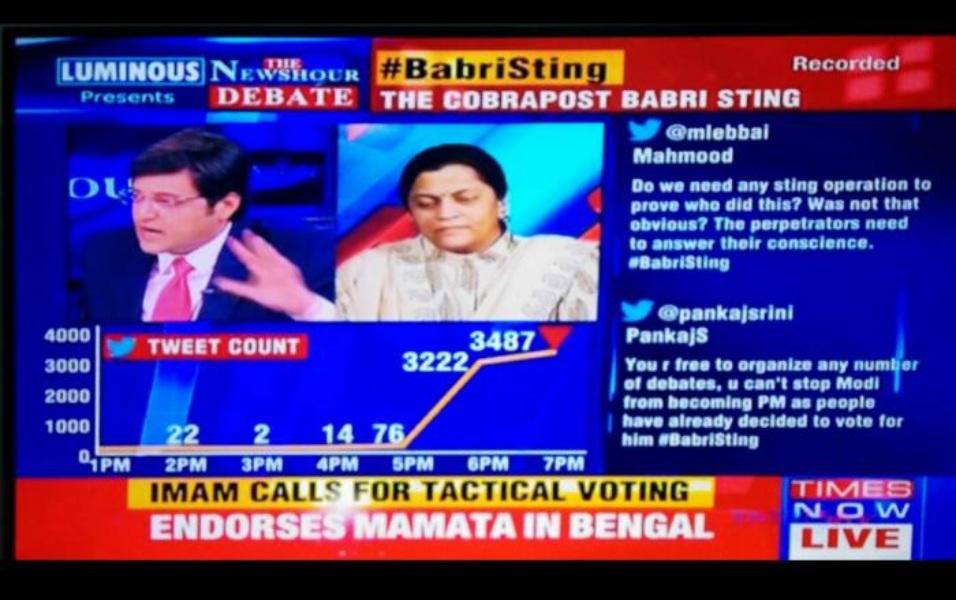 Image used with permission of @NewsHour

Also today, @timesofindia has launched “Tweet To Remember”, an #OnlyOnTwitter innovation enabled by @shopreply, wherein you can, with just a simple Tweet, receive your polling date and additional details in your phone’s calendar. All you have to do is tweet to @timesofindia with your city/town name (e.g. “@timesofindia Delhi”) and you will get a Tweet in return with important election-related information and a calendar entry.

Twitter is the world’s town square so it’s no surprise that users, candidates, and news organizations alike have taken to our platform. In fact, we’ve written previously about the intersection of Twitter and Indian elections and the wide range of other innovations we are seeing. But the scale and range of use during this Lok Sabha election is something quite breathtaking.

Be sure to visit our #Election2014 Discover page, your one-stop shop for following everything politics during this Twitter election. And stay tuned here and at @TwitterIndia for additional insight, data and innovation as Twitter’s platform for live, public conversations is used throughout the Lok Sabha election.