@NarendraModi’s 100 days at the helm have seen him break new ground in engaging with Indian citizens and world leaders as the new Prime Minister of India. Twitter is now at the forefront of the PM’s communication strategy as he uses both his personal handle (@narendramodi) and official handle (@PMOIndia) to give live updates on his every move and any announcement he makes in India or abroad to a combined audience of 8.5 million followers (and growing fast).

Since taking over as the PM, @NarendraModi has added more than 2 million followers in the first 100 days of his government and is now the second-most followed politician in the world (after @BarackObama) on Twitter.

His Twitter account (@narendramodi) has crossed the 6 million follower mark since his election win, while the official account of the Prime Minister’s Office (@PMOIndia) has grown more than 40% since his swearing-in ceremony.

A look at the geo-tagged Tweets over the last 100 days about @NarendraModi suggests that he is engaging with users all over the world who are interested in Indian politics and his new administration. Click to play heatmap below and watch the 100-day data visualisation. 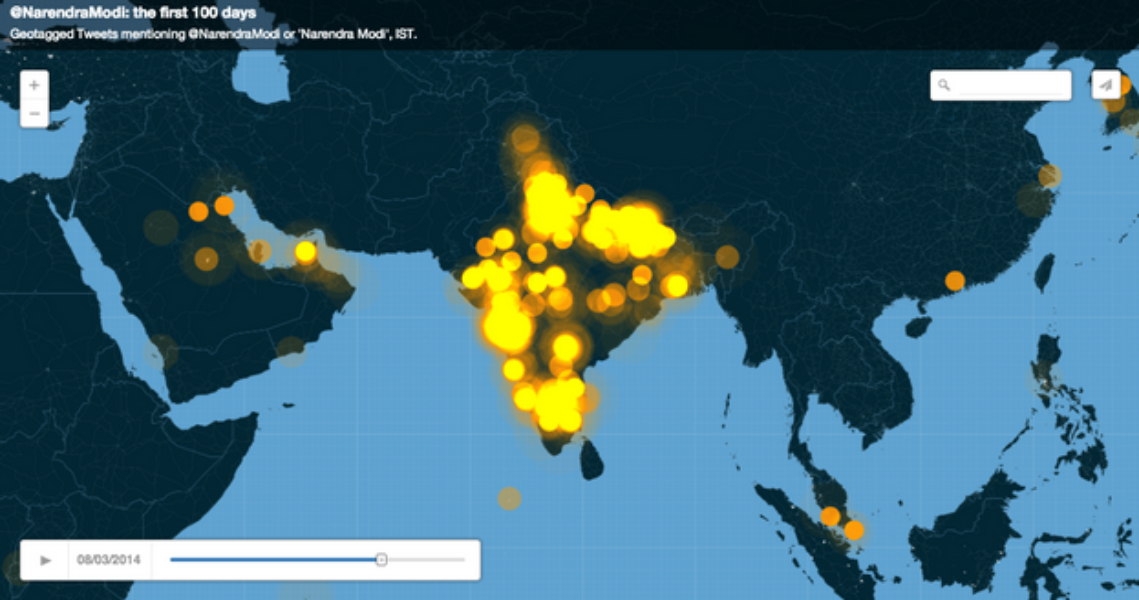 The PM has also used Twitter to usher in a new social media era for Indian diplomacy. In the run-up to his just concluded Japan trip, @NarendraModi set a unique precedent by tweeting to the Japanese people in their language. He also exchanged Tweets with his Japanese counterpart @AbeShinzo, signalling a new stage of friendship and warmth between the two countries.

The Prime Minister’s cabinet has flocked to Twitter as well, with nearly 40 ministers and ministries sharing daily updates about the happenings in their respective organisations.

As PM @NarendraModi settles into the long haul of governance, his account has become a necessary one to follow on Twitter, not just for news organisations and journalists, but also for Indian citizens who want to stay current with all he’s doing as well as a global audience interested in India’s progress under the new government.