Super Singer is one of the most watched reality music TV shows in South India, in which aspiring singers from across the region compete to win the show’s eponymous title. Vijay Television (@vijaytelevision), the broadcaster of the show, innovated on Twitter during the fourth season finale of #SuperSinger to delight their viewers.

Recognising the value of Twitter as the social soundtrack to television, @vijaytelevision employed a wide range of Twitter integrations to increase buzz, loyalty and audience engagement before and during the final show of Super Singer, as well as at the set of the finale.

Starting January 29th, @vijaytelevision offered their followers a unique opportunity to get a personalized message from their favourite #SuperSinger finalists by sending a Tweet to @vijaytelevision and using a hashtag unique to each finalist. 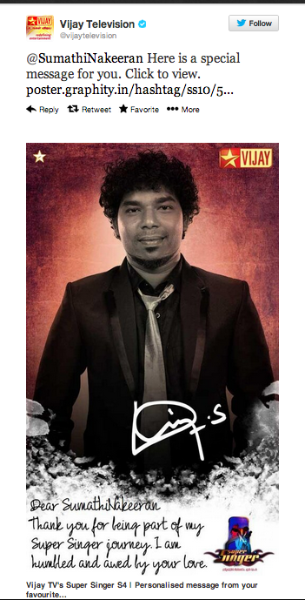 The channel used all its media assets across digital media and television to inform viewers how they could get their own personalized message from their chosen finalist. 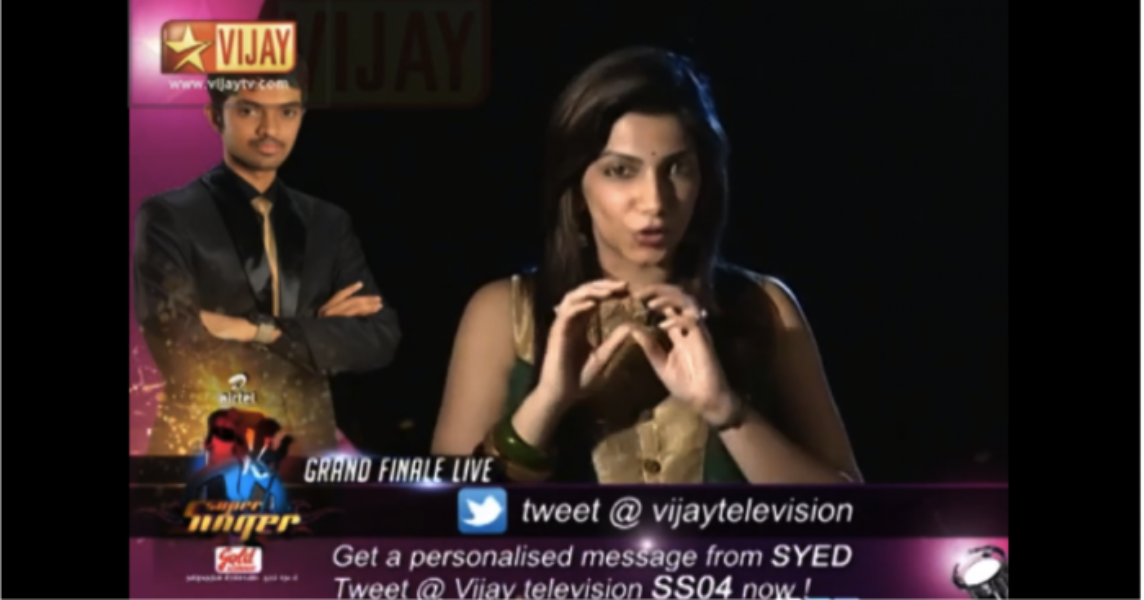 Image used with permission of @vijaytelevision

On February 1st, the day of the finale, @vijaytelevision also shared live, exclusive behind-the-scenes image via a series of Twitter Mirrors. Unlike most #TwitterMirror integrations that are centered around capturing candid celebrity moments, the multiple Twitter Mirrors on the set of Super Singer celebrated its live audience and the contestants for the final show.

Next, @vijaytelevision gave multiple lucky viewers the chance to live-tweet the broadcast from the channel’s official handle. The channel recruited these selected tweeters by broadcasting its search for the ideal #TwitterJockey on Twitter.

With the help of these Twitter jockeys, @vijaytelevision shared live candid updates from the stage, audience stands, judges’ panel and more.

And of course, there was a lively discussion on Twitter during the broadcast of the finale as home viewers turned on their TV and turned to Twitter to connect with other fans of #SuperSinger. In the days leading up to the finale, viewers tweeted in support of their favourite contestants. And, shortly after the final song of Diwakar, contestant number 10 (#SS10), Tweets started pouring in complimenting his amazing performance.

While the majority of Tweets about the finale came (unsurprisingly) from Tamil Nadu, it was also wonderful to see users from Karnataka, Maharashtra and Kerala, amongst many others, join the Twitter conversation, too.

So congratulations to Diwakar for his breathtaking win of the fourth season of Super Singer! The other winner of the night was @vijaytelevision for extending the TV audiences’ experience through real-time, public conversations on Twitter, while sharing #OnlyOnTwitter moments to bring fans and viewers closer to the action of the #SuperSinger finale.