This year, people in India and across the world came together in moments of celebration, protest, mourning and joy. Many millions of you contributed to the moments and conversations that all unfolded on Twitter.

People send more than 500 million Tweets per day. Each one contributes something special to Twitter, but only one is recognized as the “Golden Tweet,” a.k.a. the most-Retweeted Tweet of the year. This year, the global honor goes to @TheEllenShow’s starry photo from the March Oscars telecast:

#YearOnTwitter in India
The Golden Tweet for India in 2014 comes from the #LokSabha election with Prime Minister Narendra Modi’s (@NarendraModi) election-winning Tweet becoming the most retweeted Tweet ever in India:

Here are more details of the Year On Twitter in India (click on image to go to India site):

Top 10 peaks in Twitter conversation among Indians
As the world’s largest platform for live, public conversations, Twitter was where Indians expressed, consumed and connected with their fellow compatriots over global and Indian events in real-time.

Rohit Sharma (@ImRo45) smashed the world record for the highest individual ODI cricket score of 264 on November 13th versus Sri Lanka at the Eden Gardens in Kolkata. That incredible batting display drove the biggest spike in conversations on Twitter in India this year. In fact, of the Top 10 moments, three are related to cricket including the Indian Premier League. The roar of the cricket fans, indeed, was heard on Twitter this year in India.

The fan club of Rajinikanth (@superstarrajini) definitely made itself heard as well, with his arrival on Twitter making it the second largest peak in Twitter conversation of the year. With over 200,000 followers in the first 24 hours and now over 1.1 million in total, it’s clear that he has many loyal fans both off and on Twitter.

Hardly surprising, two of the top 5 peaks in conversations were about PM Modi (@NarendraModi). With 8.5 million followers, he is currently the second most followed political leader in the world (after President Barack Obama) and continues to grow his followers at a rapid pace. Top 20 most-Retweeted Tweets from Indian Twitter accounts
While politics dominates the top moments on Twitter in 2014, it is PM Modi (@NarendraModi) that sits right atop the list of most Re-Tweeted Tweets of the year. The Golden Tweet of 2014 was his declaration of victory on the 16th of May 2014 gaining over 70,000 retweets celebrating his win.

The top 20 most retweeted Tweets of India is also a reminder of the massive influence film stars have in India. While Salman Khan (@beingsalmankhan) is number two on the list, Rajinikanth’s (@superstarrajini) first ever Tweet actually makes it to sixth on the list for the year.

Also, making a debut is ISRO’s Mars Orbiter (@MarsOrbiter) as two of its Tweets make the top 10 as it made its historic journey to reach the red planet.

Sports also makes an entry on the list with Sachin Tendulkar’s (@sachin_rt) Tweet, his touching tribute to the fallen Aussie cricketer Phil Hughes.

Top 10 fastest-rising Twitter hashtag trends in India
The fastest rising Twitter hashtag trends in India saw a mixture of sports, disasters and political campaigns. Conversations around the 2014 FIFA #WorldCup lead the trends followed by the disappearance of the Malaysian Airlines flight #MH370. Meanwhile, #Mufflerman, a campaign led by the fans of the Aam Aadmi Party in support of leader Arvind Kejriwal, gathered momentum towards the end of the year. Indians tweeted about the Manchester United Football Club #MUFC and also supported updates and relief measures on the #KashmirFloods relief operations. 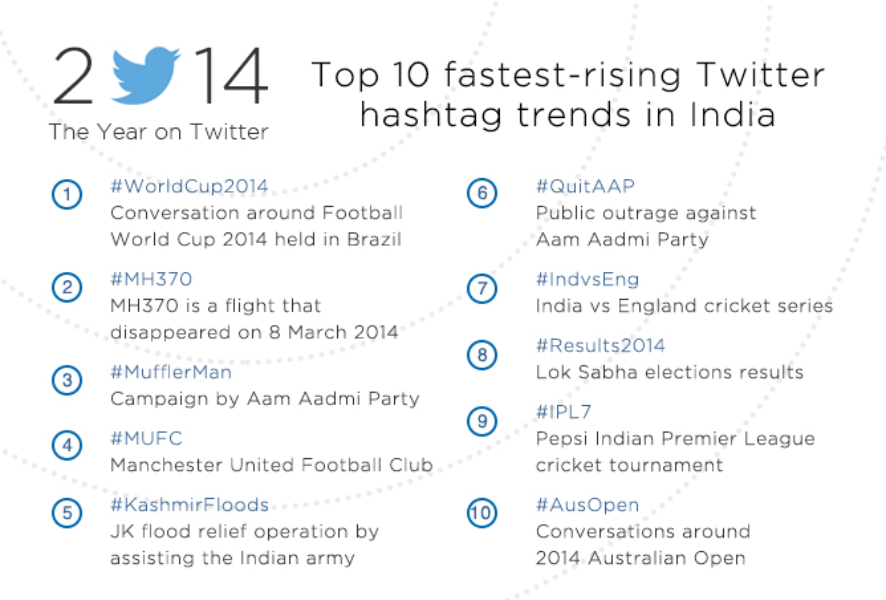 Top 20 most-followed Indian Twitter accounts
India’s list of power Tweeters is unsurprisingly dominated by Bollywood stars, with apart from @NarendraModi, only film stars feature in the top 10 spots. Sachin Tendulkar (@sachin_rt) is in 15th spot and the current Indian star batsman Virat Kohli (@imvkohli) is right behind at number 16. Author Chetan Bhagat (@chetan_bhagat) adds more variety to the list, rounding off the top 20 for India. 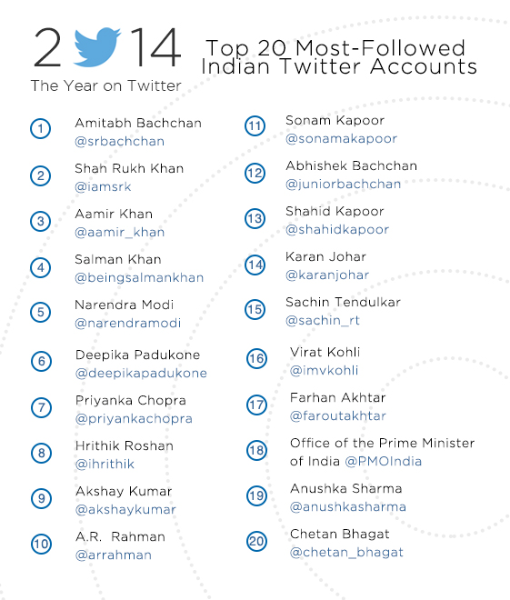 Top 10 Indian Twitter accounts with the most follower growth
Among the fastest growing Indian accounts this year, we have seen a phenomenal increase in PM Narendra Modi’s (@NarendraModi) followers with nearly 5 million followers added this year alone, more than double what he had at the start of the year. He is followed by actor and Satyamev Jayate host Aamir Khan (@aamir_khan). Amitabh Bachchan (@SrBachchan) and Shah Rukh Khan (@iamsrk) also added significant followers in the year 2014. Interestingly, the Prime Minister’s Office’s (@PMOIndia) account grew by 60 per cent over the year, too. 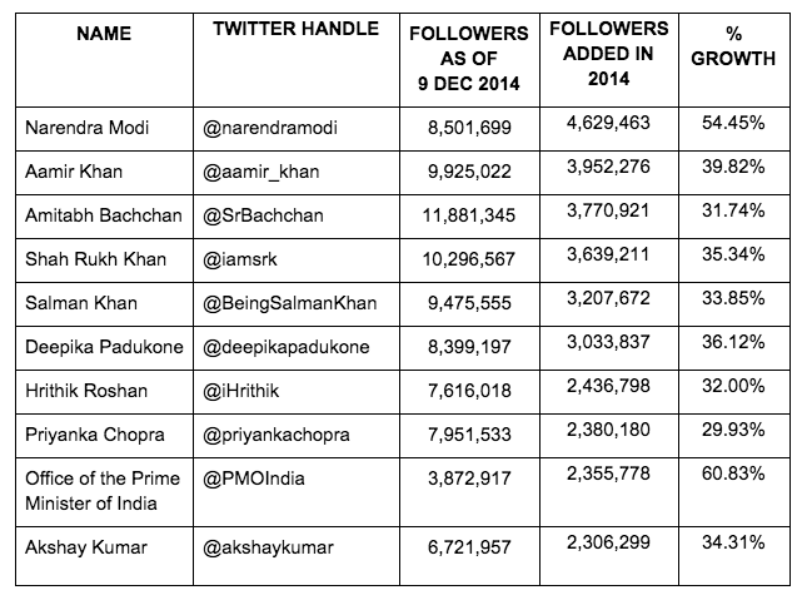 Famous Indian personalities and organisations who joined Twitter in 2014
Some of the biggest names and organisations in India came to Twitter in 2014 including superstar Rajinikanth (@superstarrajini), the President of India (@RashtrapatiBhvn), ISRO’s Mars Orbiter (@MarsOrbiter), Ministry of Health and Family Welfare (@MoHFW_INDIA), Ministry of Railways (@RailMinIndia) and Uday Kotak (@udaykotak) to name a few.

Notably, Rajinikanth joined Twitter on May 4th (or Twitter joined Rajinikanth, as the joke goes) and within 24 hours over 200,000 of his fans flocked to follow him on Twitter. That number more than doubled within a week, and in less than six months, he had breached the 1 million mark. 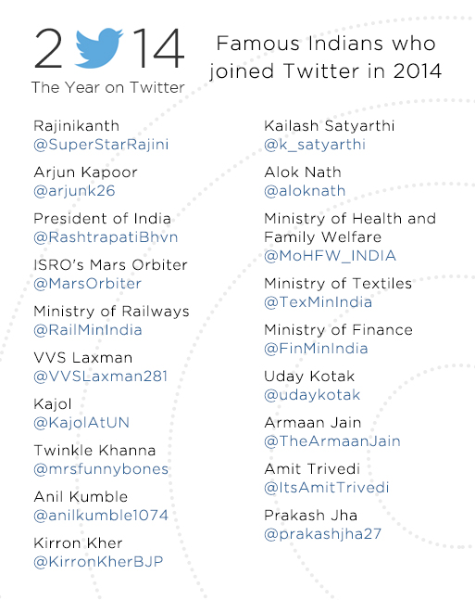 2014.Twitter.com also showcases the year from the perspective of some of your favorite (and most prolific) Twitter users. The list of featured users is below. From the site, you can also explore their #5ToFollow to see their own must-follows.

Finally, while Ellen’s and PM Modi’s Tweets are the most “Golden” internationally and locally, there are countless others we won’t soon forget. Here are a few you might appreciate.