“Happy New Year” (@HNY) is one of the most anticipated Indian movies of 2014, and Red Chillies Entertainment (@RedChilliesEnt) used Twitter in unique ways to keep fans engaged with the production phase until the official trailer release.

The movie’s cast — Shah Rukh Khan (@iamsrk), Abhishek Bachchan (@juniorbachchan), Boman Irani (@bomanirani), Sonu Sood (@SonuSood), Deepika Padukone (@deepikapadukone) and the director Farah Khan (@TheFarahKhan) — live-tweeted their daily shoots and pictures from the sets using #HNY and #HappyNewYear. This constant sharing of behind-the-scenes moments on Twitter brought the movie set and the real-time conversation between the cast members and other celebrities visiting the movie set much closer to fans.

On January 1, 2014, “Happy New Year” became the first movie in India to share personalised autographed posters from the cast exclusively on Twitter. Users Tweeted to @HNY with #HNYPoster and received a personalised Tweet with a poster autographed by the cast.

Delighting fans by sharing with them first

After its innovative poster release, “Happy New Year” has released its official trailer on Twitter with an exclusive bonus for fans — a personal message from the cast. To view the trailer, fans are invited to Tweet @HNY and their favourite cast member with #HNYTrailer.

@RedChilliesEnt also surprised fans with signed personalised posters featuring the cast member of their preference via Tweets, when fans Tweeted to with #HNYTrailer.

Here is what some of the personalised posters look like: 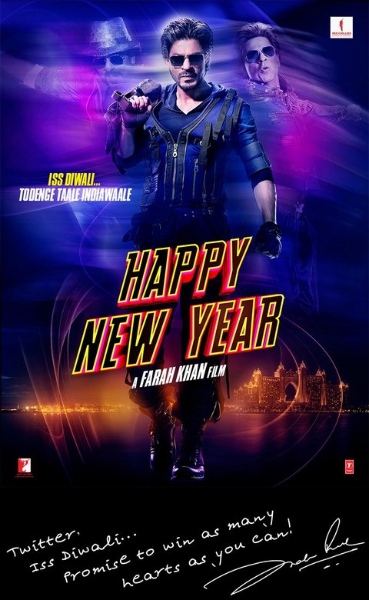 While receiving a personalised poster is still a fan-tastic experience, fans on Twitter were even more delighted to get personalised videos of the movie trailer from their favourite movie star, providing them with a unique #OnlyOnTwitter experience.

After revealing the look of their character via the personalised posters on Twitter, cast members also changed their Twitter profile name to align with their character from the movie.

Red Chillies has used Twitter’s mobile platform in an innovative way to let fans experience the “Happy New Year” journey alongside the movie’s stars in a live, public, and conversational way. As the movie gets set to release during Diwali, follow @HNY and stay tuned here for more on their innovative use of Twitter!