By
Wednesday, 27 May 2015
Link copied successfully

When @narendramodi was elected as the Indian Prime Minister, he had close to 4 million Twitter followers.

At the end of one year in office, he has 12.5 million followers. So his follower growth of over eight and a half million users nearly equals the entire population of Switzerland. 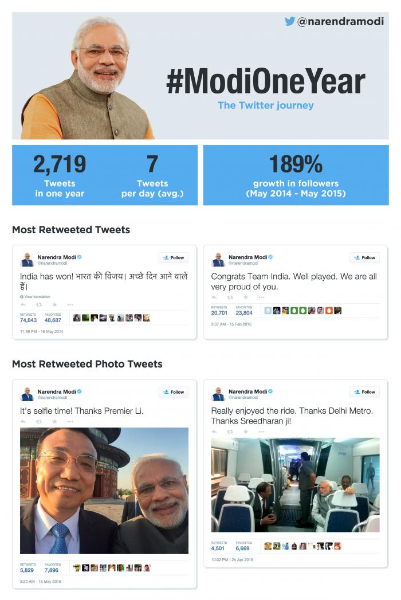 He’s been able to accomplish this amazing growth by being amongst the first among equals to do a number of things on Twitter.

Be it reaching out to his followers via Direct Messaging

or pioneering Twitter Samvad as a part of his Digital India initiative to connect offline users to his world on Twitter and provide them with crucial information about governance.

as well as overseas.

Twitter Diplomacy
As the second most followed political leader in the world after @barackobama, PM Modi has been able to connect with leaders across the world on Twitter. Indians will always remember the moment when he invited the American President to the Republic Day parade earlier this year on Twitter.

While #SelfieWithModi trended even before he was elected to office, in the last year he has made it his own. Everyone from Chinese Premier Li Keqiang to the scientists at the French Space Agency (@cnes) has claimed a selfie with Modi.

Governance on Twitter
Aside from setting new standards for public outreach & communication via Twitter, the PM has ensured that his cabinet is also using Twitter to reach out to citizens about key government initiatives.

Finger on the Pulse
The Prime Minister’s use of Twitter demonstrates how he genuinely has his finger on the pulse of the nation during times of crisis or celebration, victory or defeat. Here are some of his most Retweeted Tweets in the last year.