The presentation of the Economic Survey, the Railway Budget and the Union Budget all made the last week of February a keenly-watched time in India. This year our partners @PMOIndia, @RailMinIndia, @FinMinIndia and @MIB_India really brought alive the #Budget2015 experience for people on Twitter.

In an attempt to make the Railway Budget truly for the people and by the people, @RailMinIndia asked citizens for suggestions they could include in the budget. It then hosted live Twitter Question and Answer sessions with Railway Minister @SureshPrabhu, and even live-Tweeted the Railway Budget speech on 26th February. The Press Information Bureau (@PIB_India) and the Ministry of Information & Broadcasting (@MIB_India) also Tweeted innovative infographics explaining some of the new initiatives in the budget.

Before Union Budget Day on 28th February, the Ministry of Finance (@FinMinIndia) also used the same approach to reach out to citizens for their input on #Budget2015. The Finance Minister @ArunJaitley then answered questions on Twitter after presenting the budget, engaging with users one on one.

It wasn’t just the different ministries that broke new ground. For the first time ever, our media partners took budget-related information to Indian users far and wide. Partners @AajTak, @AmarUjalaNews, @ABPNewsTV and @ETNow used @ZipDial, a product which helps media partners grow and engage with Twitter followers who are not online. Publishers use it to post their Tweets and their content is delivered as an SMS to subscribers. One missed call is all their readers need to do to get the best of Twitter right on their phones as an SMS.

Its sister channel @Ibnlive delighted users with an “@ reply” integration, which meant all of their followers received customised replies to their Tweets.

Many of our other partners including @EconomicTimes, @TimesNow, @HeadlinesToday, @NDTV, @HtTweets, @IndianExpress and @The_Hindu used Twitter tools such as Reverb (@TwitterReverb) and Curator, and continued well-established best practices like live-Tweeting, the use of video Tweets and Vines.

And this led to some great conversation online. Here’s a snapshot into what users were saying on the day courtesy @TwitterReverb. 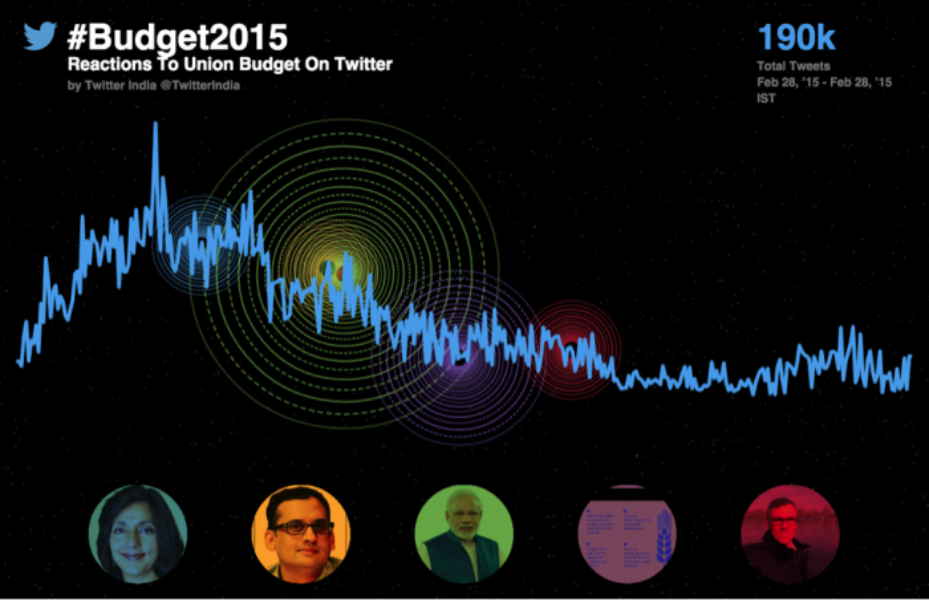 We’re glad that, through Twitter, the unveiling of the Railway and Union #Budget2015 played out as a two-way conversation between the government and citizens. Thanks to all our government and news partners for making this important discussion so much more accessible for our users – both online and offline.