ICC has innovated with Twitter for cricket fans to get a Trump Card about their favourite players at the ICC World Twenty20 by simply Tweeting to @ICCLive with #WorldT20Heroes.

In addition to showcasing relevant Tweets during the game, ICC is giving cricket fans around the world a chance to make dreams come true in each of the 35 men’s ICC World T20 matches and the 13 televised Women’s World Twenty20 matches.

To help cricket fans add a little colour to their Tweets, ICC and Twitter have combined to bring to life new Twitter emojis.

Following on from the success of the Player of the Match at previous ICC events, for the first time at a world cricket event, ICC will be using the Twitter Challenger app to Tweet a video with the Man of the Match with his trophy so that fans can instantly connect to the player post-match.

In addition to this, @ICC will Tweet viral video content during the event and Tweet a Play Of The Day videos on Twitter to help fans watch and decide their daily vote for the Nissan Play of the Day.

ICC will be using Vine to take fans behind-the-scenes of the World T20 with looping six second videos, from the dressing rooms to the fans in the stadium, from the fans arriving for the matches to the batsmen walking into and out of the ground. There’s plenty to catch up on as the ICC World T20 unfolds.

Periscope broadcasts from the commentary box

@ICC will be using Periscope to live broadcast some of the behind-the-scenes activity as the commentators get ready to go on air so that fans can get even closer to the action at the ICC World T20.

Many of the players across all 16 nations competing in India are on Twitter. You can follow each of their individual journeys throughout the tournament.

This dream team is composed of the most-mentioned #WT20 players on Twitter over the past 12 months, forming a first XI that would be the envy of any coach. 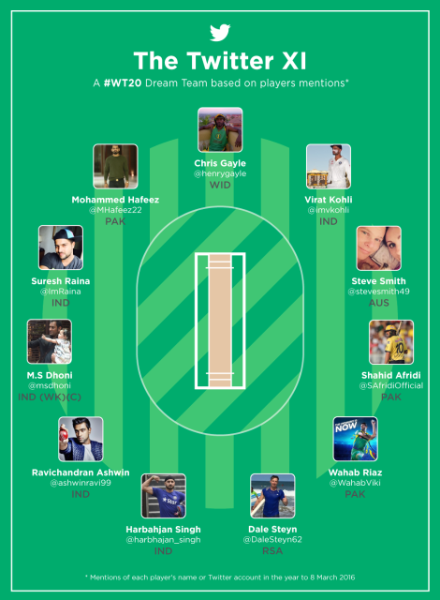 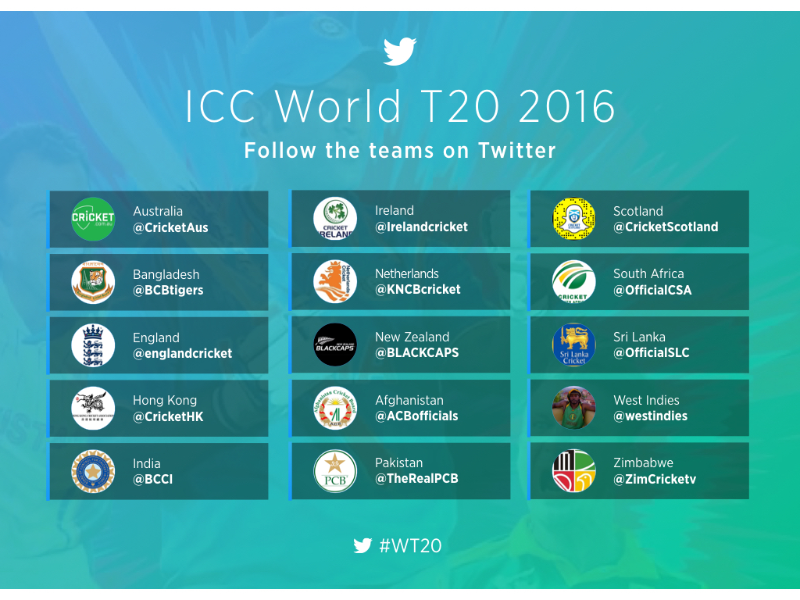