By
Tuesday, 3 May 2016
Link copied successfully

Any woman can ignite conversations and effect change on Twitter. From challenging female stereotypes by using hashtag campaigns like #ILookLikeAnEngineer, to encouraging substantive dialogue on the red carpet with #SmartGirlsAsk, or challenge stereotypes of beauty through #UnfairAndLovely, women use Twitter to raise awareness, build communities, and be heard.

That’s why we created the #PositionOfStrength campaign a year ago — to help women use Twitter to its full potential by leveraging the platform to speak out on the issues important to them. This is a natural continuation of our commitment to gender equality. The company continues to support initiatives like HeForShe (@HeForShe), a solidarity movement led by the United Nations (@UN) that also encourages men to be part of the change.

In Asia, we launched our first #PositionOfStrength in Delhi in February 2016, and subsequently in Dubai, Singapore, and Indonesia. Last weekend on 30 April, we took the #PositionOfStrength initiative to Bengaluru for the first time. Along with our partner, SheThePeople.TV (@SheThePeopleTV), we hosted a panel discussion and a workshop with women leaders from the city to discuss how to increase empowerment and safety for women, both online and in the real world. 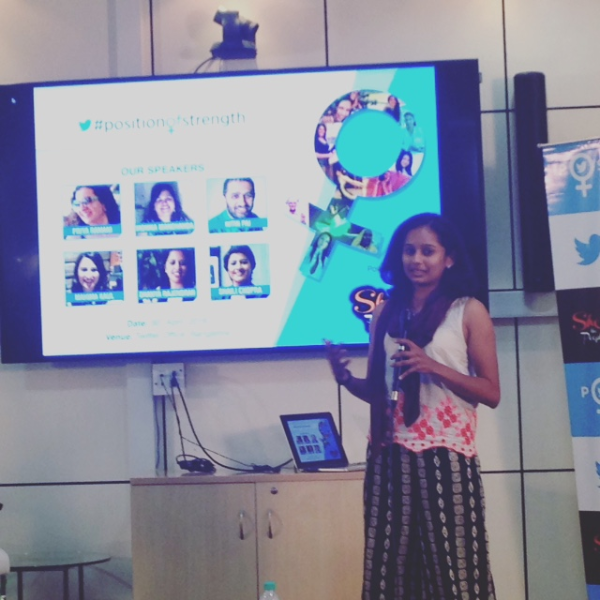 The event began with a Twitter 101 workshop, followed by a panel discussion with some of Bengaluru’s most prominent female Twitter users on using the platform from a #PositionOfStrength. This was followed by a safety workshop that gave an in-depth view into Twitter rules and tools that people can use to better control their Twitter experience. The event concluded with the Soapbox segment, where participants — professional working women — highlighted how they leverage the platform for campaigns, networking, and making a positive impact in the local community.

Some of Bangalore’s leading women influencers joined us at Twitter’s Bengaluru office for the event. The panel list included food entrepreneur and consultant Monika Manchanda (@monikamanchanda); editor-in-chief of The News Minute, Dhanya Rajendran (@dhanyarajendran); and Priya Ramani, editor-at-large at Juggernaut Books (@priyaramani); and was moderated by Amrita Tripathi (@amritat), editor-at-large at SheThePeople.TV (@shethepeopleTV) and co-curator of @genderlogindia, a crowdsourced hub on gender. The discussion roped in their perspectives on using the platform to build up their profile and to be a #ForceForGood in society.

They also shared their strategies on staying safer on the platform and handling abusive comments, which is often aimed at women of power and those with strong opinions. They agreed that one should not cede space to the bullies but must instead use Twitter from a #PositionOfStrength. The intimate gathering consisted of professional women, and also saw participation from men — on the panel and in the audience. Nitin Pai (@acorn), the director of Takshashila Institute, spoke extensively on how to leverage the platform to have an inclusive dialogue, pointing out that “the quality of debate in a democracy is only as strong as its participants.”

Speaking on the panel, food entrepreneur Monika Manchanda (@monikamanchanda) said, “Women can Tweet to find jobs, connect with individuals across the country and globally, build a career-oriented network, and develop their professional identity using Twitter. They can crowd-source investors, crowd-fund ideas, and integrate with other Twitter users who can aid their professional development. Women indeed are a driver of social media in a constructive way. Twitter makes for a great learning curve. I have learnt to sieve through Twitter conversations and find meaningful ways of using social media.”

The panel discussion was followed by a detailed workshop on Twitter’s rules and tools, emphasising how safety continues to be a top priority for the company. The participants were also introduced to Twitter’s safety center which has also been translated into Hindi for the Indian market.

Through these interactions — both offline and online — feedback from our female users is helping us understand how people use Twitter, while at the same time educating them on how to leverage the platform to amplify their voice. It’s also an opportunity to highlight many women-led projects which use Twitter extensively to disseminate their messages, not just by reaching influencers on the platform but in fact, by becoming influencers themselves.

For example, the soapbox segment, which followed the panel discussion, is designed to give each and every participant a platform to share their ideas, learnings, and passions to the group. Through the soapbox, we heard from Jasmeen Patheja (@jasmeenpatheja) who created the @BLANK_NOISE project to highlight gender-based violence. She explained how she’s been able to bring attention to this pressing issue through hashtag campaigns and joining up with other organizations on Twitter. Vijaya Moorthy (@vmoorthynow) shared how she and a number of citizen volunteers came together on Twitter to create @InCrisisRelief during the Kashmir Floods.

“Social media today is an extremely powerful tool,” says Vijaya Moorthy of In Crisis Relief. “We use Twitter extensively during our rescue operations and relief camps and we also realise it is important to educate people to use the right hashtag during a crisis. Twitter has really been a powerful medium and helped us in saving many lives.”

Other soapbox speakers shared their Twitter stories such as networking and reaching out to brands, while some pointed out that while they were meeting many of the participants in the room for the first time in-person, many of them were already friends on Twitter!

To promote a safer online environment for Twitter users in India, we’re partnering with experts from a wide range of organisations that enable us to receive continuous feedback on the safety mechanisms we have in place, and produce educational resources for our diverse users. Some of the new partners from India are:

Thanks to our partners for their support as we work together as a community to give more women a public voice and raise their influence in society, for both today’s generation and the next. Explore this list of participants from all the #PositionOfStrength events in India and see full clips from #PositionOfStrength in Bengaluru here.