As the year comes to an end, Twitter continues to show that it’s the best place to find out what’s happening in the world. Asia stood in the spotlight in 2018, particularly as the region commemorated major milestones on the global stage.

From the making of history during #TrumpKimSummit to #CrazyRichAsians – the first Hollywood film in 25 years to feature a full Asian cast – people across the region turned to Twitter to keep up with what’s happening and join in conversations across breaking news, entertainment, sports, politics and social change.

Most Tweeted Hashtags in Asia Pacific

Whether it’s in Australia, Indonesia, Japan, Singapore or Thailand; fans across Asia can’t stop Tweeting about Kpop. Korean bands BTS (@BTS_twt), EXO (@weareoneEXO) and GOT7 (@GOT7Official) emerged topping the most Tweeted about hashtags this year in Asia.

This year marked the first time that South Korea hosted the Winter Olympics, and the second Olympics held in the country overall. Sporting fans took to Twitter to watch live game updates and cheer on their country teams while entertainment fans joined in the celebrations, which included performances by popular Kpop bands, EXO (@weareoneEXO), iKON (@YG_iKONIC), Red Velvet (@RVsmtown).

The FIFA #WorldCup played out on Twitter in a big way as football fans around the world gathered in one global conversation. With football being the most popular sport in most Asian countries, fans on Twitter celebrated sporting victories during the World Cup when South Korea defeated reigning champions Germany, booting them out of the Group Stage; and when Japan became the first Asian country to defeat a South American team in the World Cup.

The Japan national football team is not the only group with strong support from its citizens; convenience store chain #Lawson emerged as one of the most Tweeted hashtags in Asia confirming the prized place of convenience stores as a huge part of local society and culture in Japan.

Breaking the Kpop stars dominance, the top hashtags in Asia this year also saw an increased popularity in Thai entertainment, affirmed by singer Palitchoke Ayanaputra inclusion in the top 10 hashtags this year.

The global social movement calling out and condemning sexual harassment and abuse, ignited in Asia this year, especially in Australia, India, Japan, Singapore and South Korea, and users turned to Twitter to speak out, making it the eighth most mentioned hashtag in our region.

Gaming conversation continues to be huge on Twitter, and it’s represented on our top hashtags list at number nine by #Fgo – Fate/Game Order, a hugely popular online role-playing game.

Released in 2018, #Sarkar the Tamil film starring Thalapathy Vijay (@actorvijay) has been making massive gains worldwide, winning the appreciation of fans. Underlined by a political theme, the buzz around the movie was further amplified with audiences taking to Twitter to express their opinions, and making #Sarkar one of the top hashtags of 2018 in India and the region.

Other Notable Moments in Asia Pacific

Outside of the top ten most mentioned list, we also saw numerous Asian conversations sweep the world.

The world was transfixed by 13 young men from Chiang Rai, Thailand for almost a month. 12 schoolboys and their coach from a local football team who went missing in the caves after a monsoon downpour gripped the nation with worry as news bulletins and social media erupted with news of an excursion-turned-disaster. People across the globe turned to Twitter to follow what was happening on ground with the #ThaiCaveRescue.

History was made as  the world tuned in to Twitter to watch South Korean President, Moon Jae-in and North Korean Leader, Kim Jong-Un, meet ahead of the #InterKoreaSummit for the first time in 11 years.

When India’s southern state of Kerala was hit by a devastating flood in August, Indians took to Twitter with the hashtag #KeralaFloodRelief to coordinate search, rescue and food distribution efforts.

On a light-hearted note, #CrazyRichAsians, the first Hollywood film starring an all Asian cast (since The Joy Luck Club 25 years ago) generated much buzz on Twitter as Asians and Hollywood celebrities alike Tweeted in support. Singapore, Malaysia and the Philippines were amongst the top five countries that Tweeted the most in relation to the film. The movie garnered over 350,000 tweets just over the opening weekend in the US, making it the most talked about movie in August around the world.

The Golden Tweet of Asia Pacific in 2018 – the most retweeted tweet – is a video of BTS member J-Hope take on the #InMyFeelingsChallenge, a dance craze that swept the internet, with thousands of Twitter users (celebrities included!) sharing videos doing the same same moves to the tune of Drake's hit song "In My Feelings".

Most Mentioned Politicians and Political Events in Asia Pacific 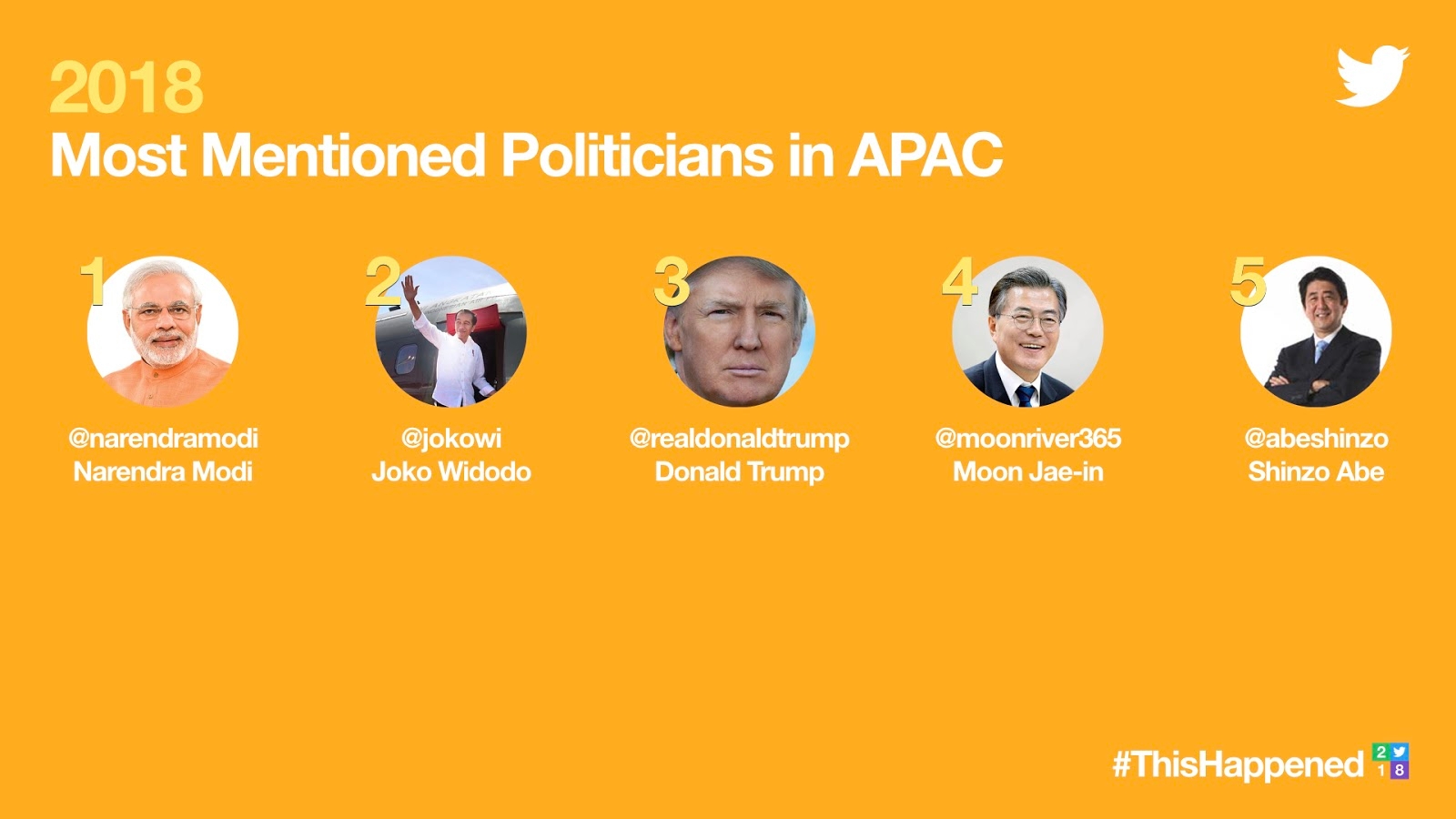 In August 2018, Australia installed a  new Prime Minister as Malcolm Turnbull was deposed as leader and Scott Morrison tooks the reins – making him the sixth Prime Minister in 11 years. With #auspol again the number one hashtag in Australia, it was no surprise to see Aussies take to Twitter in huge numbers to discuss another leadership change in the top job.

History was made when world leaders U.S President Donald Trump and North Korean Supreme Leader Kim Jong-un met for the first-time in Singapore. From political leaders to journalists, experts to citizens, the world watched and talked about the summit on Twitter generating nearly 4 million tweets from 1 June, and a spike in tweets per minute (5,200) when the world leaders shook hands.

As the junta marked the fourth anniversary of a military coup on 23 May 2018, Thai users started the hashtag on Twitter to urge for a re-election.

The 33rd ASEAN Summit (and related Summits) was held in Singapore from 13 to 15 November and Twitter partnered Singapore’s Ministry of Foreign Affairs (@MFAsg) to livestream the summit for the first time ever; strong interest in the region’s biggest diplomatic meeting with 2.1 million Tweets during the week.

Malaysia witnessed its most extraordinary election result in Malaysian history as results of this General Election brought an end to its ruling party, Barisan Nasional. During the 1.5-week campaigning period, there were over 7.3 million tweets. 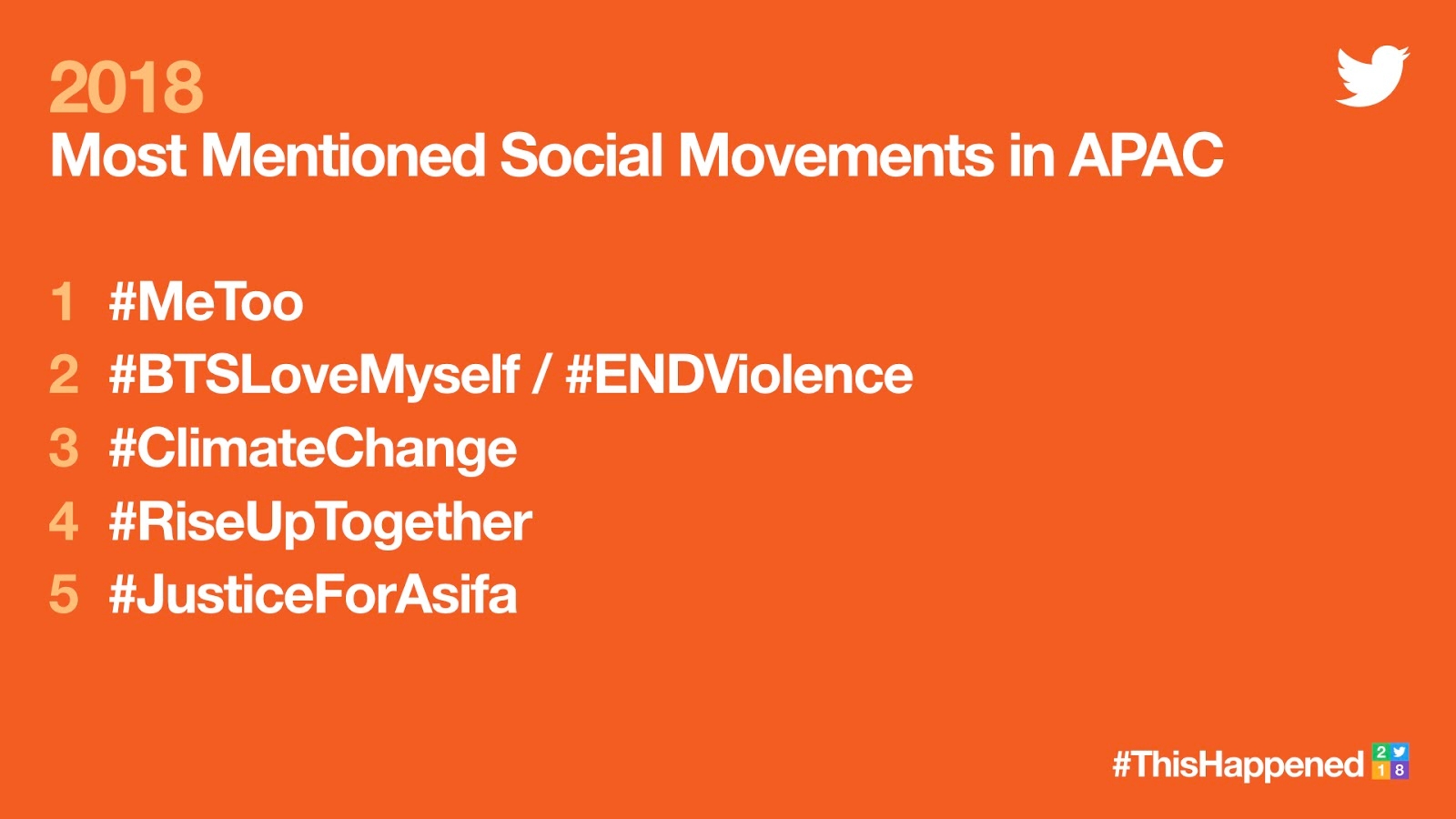 In addition to #MeToo, people on Twitter rallied around the most discussed social movements this year across the region, including:

BTS and the United Nations Children’s Fund (UNICEF) collaborated in a campaign against violence toward children and teens around the world, and both fans and activists showed their support with the hashtags #BTSLoveMyself and #ENDViolence. They were the first K-pop group to address the United Nations, encouraging young people to use their voice to speak on world issues.

#ClimateChange has been a topic of discussion across Asia year on year, with conversations around discussions on protecting the planet and environmental sustainability. #ClimateChange was the sixth most Tweeted about hashtag in Australia this year and continues to be a topic Aussies are passionate about. Related, last week #ClimateStrike trended around the nation as school students campaigned for more action on climate and shared their experiences on Twitter.

The theme for this year’s Metro Manila Pride march is Rise Up Together, and Twitter users shared their support for the LGBTQ+ community in the Philippines with #RiseUpTogether. The march drew a 25,000-strong crowd, making it the largest Pride demonstration in Southeast Asia.

Most Mentioned Sporting Teams and Events in Asia Pacific 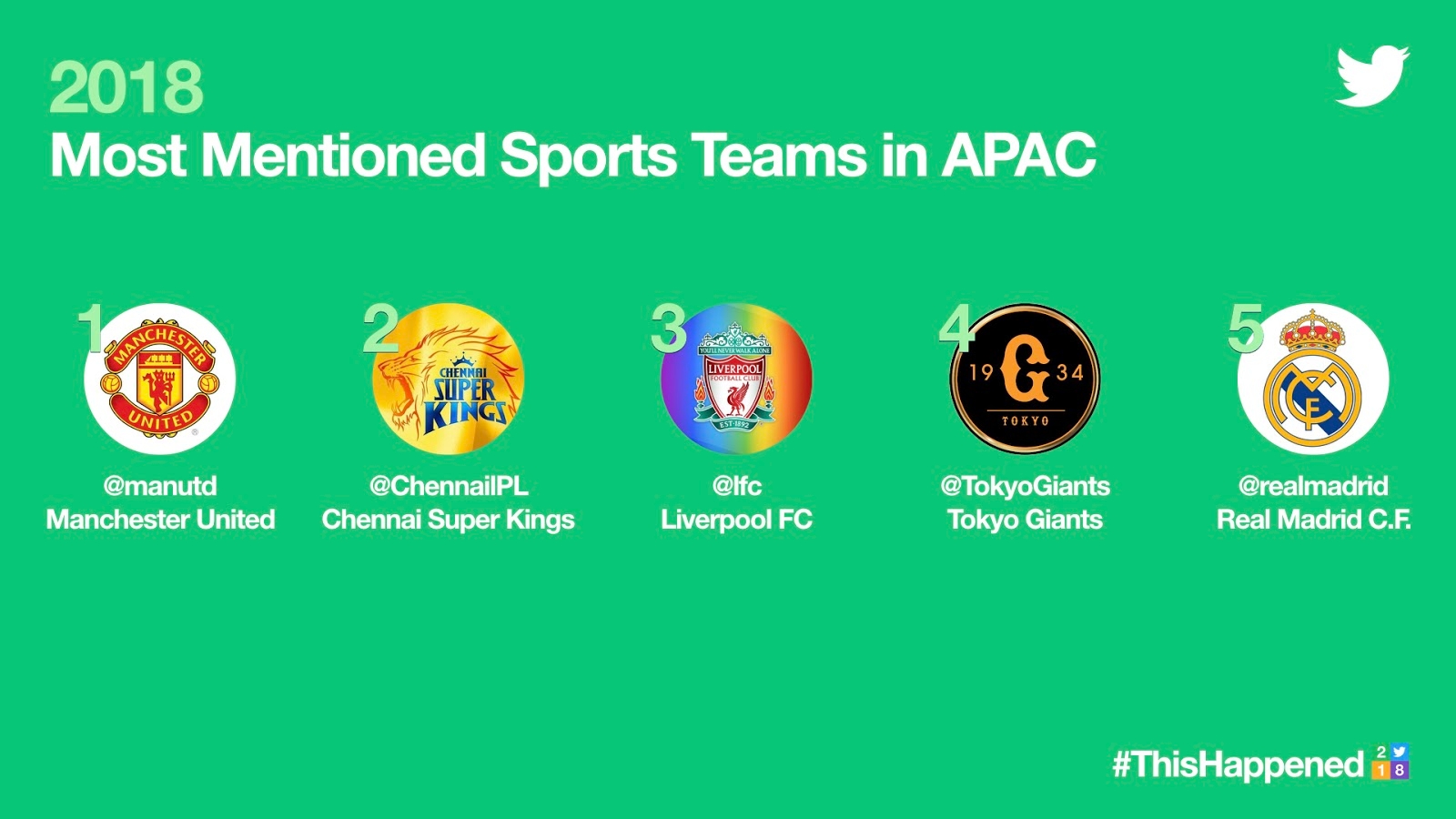 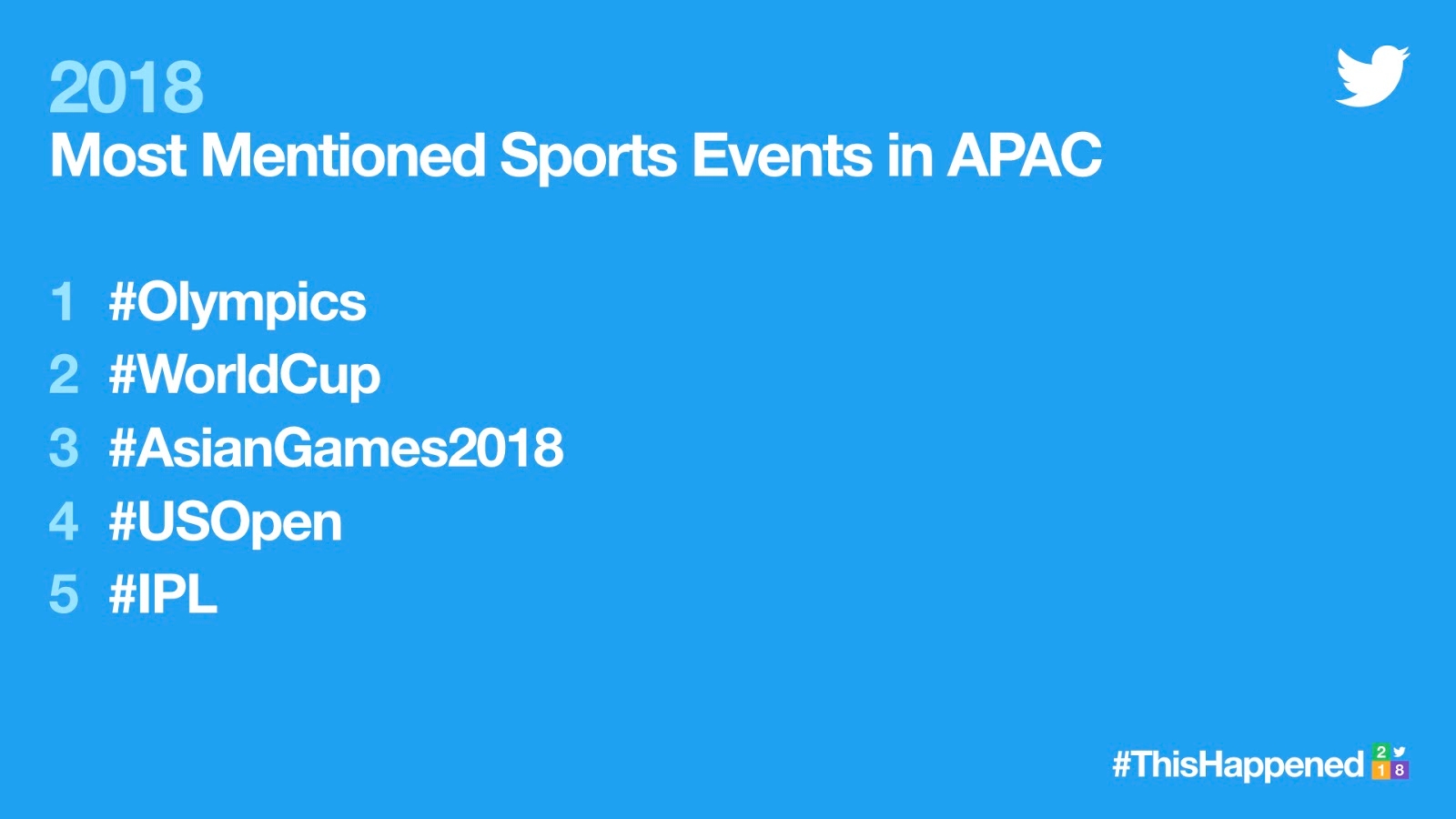 In addition to the PyeongChang 2018 Olympic Winter Games and 2018 FIFA World Cup that placed fourth and fifth respectively on the top most Tweeted hashtags in Asia, other sporting events that drove the most conversations on Twitter include the Jakarta Palembang 2018 Asian Games, the US Open and the Indian Premier League.

People across Asia looked to Twitter during the two-week event in Indonesia and generated 12 million Tweets; whether it was to celebrate victories, watch live matches analysis and commentaries, or to show support for athletes.

Rounding off the Most Mentioned Sporting Events in the region is the #USOpen, where Naomi Osaka (@Naomi_Osaka_) became the first Japanese woman to win a Grand Slam

The eleventh season of the ever-popular Indian Premier League (#IPL2018) saw sporting fans across India join in live conversations on Twitter to lend support to their favourite teams, with one of the most mentioned sports teams (@ChennaiIPL) winning their third title.

Whether it was to get the latest updates on breaking news and live events, or follow the latest trends, topics and conversations, Twitter again demonstrated that it is one of the best ways to see what’s happening in the world and to talk about it.