Kpop Generation Analysis: BTS set an example for the 4th gen on Twitter

Editor's Note: We said goodbye to Fleets on August 3, 2021. We are grateful to you for being part of this community. Keep the conversation going on Twitter.

#KpopTwitter is getting bigger on a global scale.  Last year, we looked at the history and growth of Kpop with the data “10 years of Kpop with Twitter (Sep 2020)”. To celebrate 10 years of #KpopTwitter success, Twitter released K-pop data across 20 markets to show how the passionate global K-pop community shares their love and connects with their favorite artists around the world. This year, through the data of ‘K-pop Generations Analysis by Twitter Usage (June 2021)’, we analyzed the current 3rd generation of Kpop as well as the 4th generation leading the future of Kpop. We analyzed K-pop stars’ use of Twitter for the first time and found it to be a critical tool for artists as they built global audiences, as the fourth generation of K-pop stars actively communicated with global fans on Twitter. This analysis, “K-pop Generations Analysis by Twitter Usage”, looked at 69 total K-pop artists with more than 300,000 Twitter followers as of May 1, 2021, and analyzed the artists by generation. 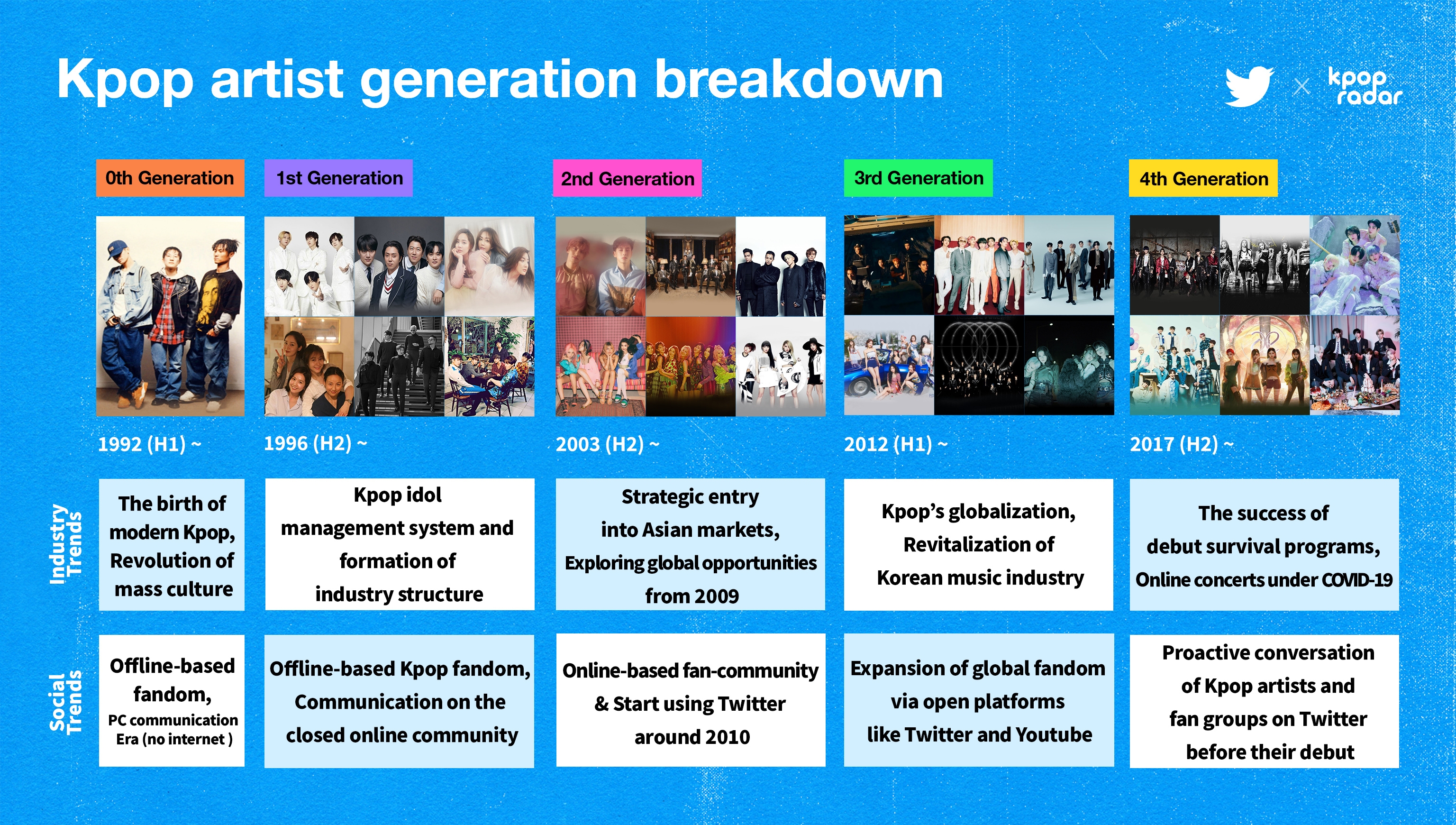 K-pop stars’ method of communicating with their fans has changed in line with the development of the K-pop industry, as well as the media. First and second generation K-pop stars communicated with their fans through closed communities, such as fan cafes. From the third generation onward, artists shared content with their fans through global media platforms such as Twitter, and started to communicate with wider fan bases through live streaming and text messaging channels. Recently, beyond releasing content, K-pop stars are diversifying ways to communicate with their fans by actively utilizing new features such as Fleets and Spaces on Twitter. In addition, as offline concerts and fan signing events were canceled due to the COVID-19 pandemic, they are actively communicating with global fans through online concert streaming, as well as #TwitterBlueroom live Q&A on Twitter. 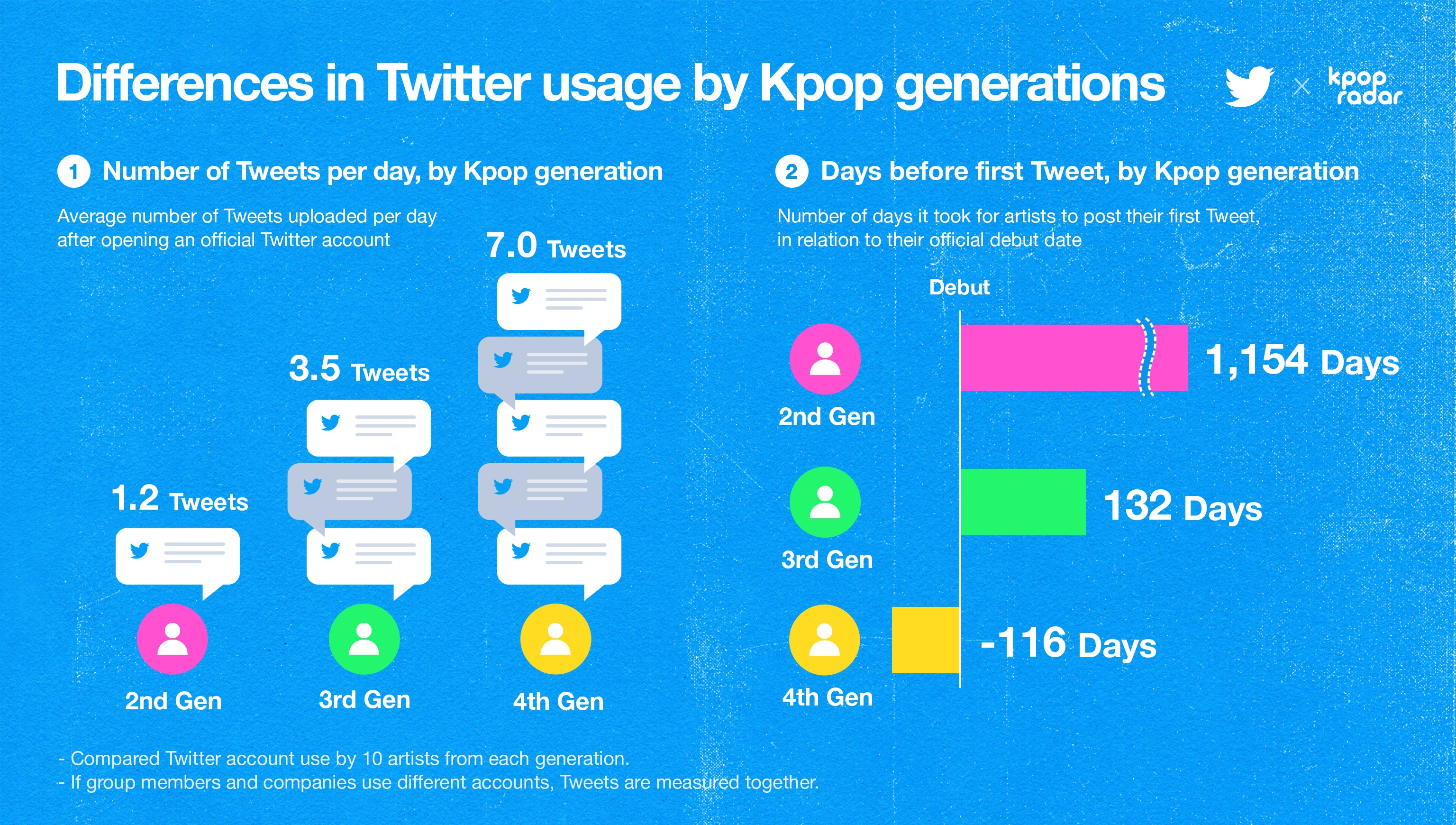 Tweets per day
Excluding the first generation, who were active before Twitter launched, K-pop stars averaged: Analyzing the amount of Tweets for a year following artists’ debuts reveals other differences between the generations as well. Most second- and third-generation artists did not post Tweets before their debut, and slowly increased their amount of Tweets after their debut. However, a notable exception is BTS: BTS opened its Twitter account in December 2012, six months ahead of debut, and actively communicated with fans globally. Currently, BTS has 36 million Followers on Twitter.

Fourth generation artists, such as ATEEZ, THE BOYZ, ENHYPEN, Stray Kids, TOMORROW X TOGETHER, and TREASURE, communicated with their fans after opening their Twitter accounts, months ahead of their respective debuts. On average, fourth generation artists Tweeted an overwhelming amount before their debuts compared to second and third generations, with each artist uploading an average of 323 Tweets, and accumulating 562,377 Followers even before debuting. 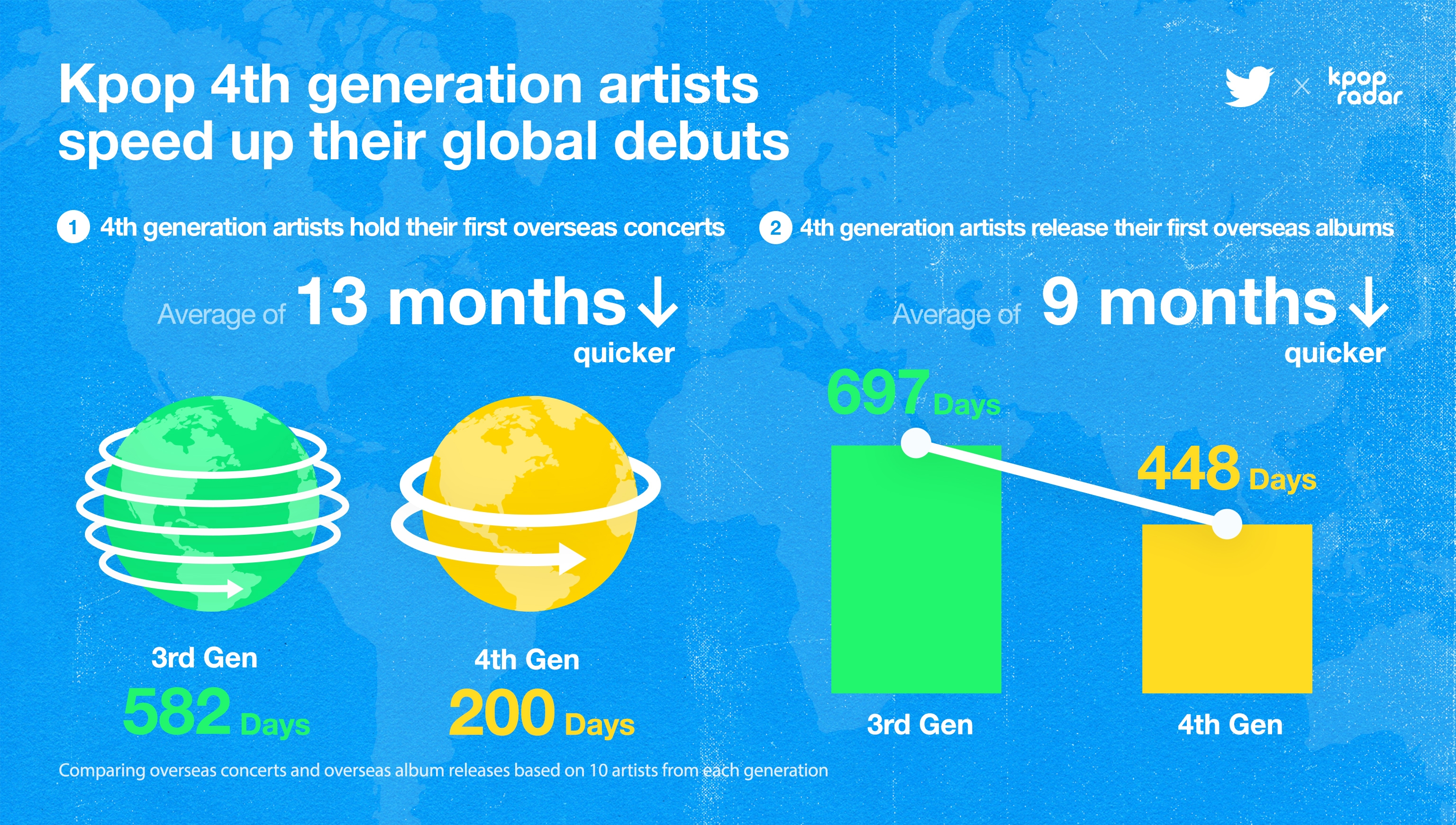 Direct communication with global fans through Twitter has now become a success formula for K-pop artists. said When BTS, a 3rd generation K-pop group, had intimate real-time conversations with its global ARMY, it set an example for the 4th generation to make this a feature of their engagement with fans. Fourth generation artists like THE BOYZ, Stray Kids, ATEEZ, TOMORROW X TOGETHER, GIDLE, ITZY, TREASURE, ENHYPEN, and aespa, who have been using Twitter as an active communication channel even before their debut, are advancing to the global stages faster than the previous generations, which demonstrates that digital-based communication has a significant impact on growing their fandom.

This survey included the following artists:

Since most of the first generation groups, like HOT, Sechs Kies, SES, and Fin.K.L., were active before the launch of Twitter, and do not currently have Twitter accounts, they were excluded from this data analysis. Among first generation artists, however, Shinwa (@ShinhwaCompany), continue to be active as a group, and share their latest news through Twitter. Also, Seo Taiji (@SEO_TAIJI), known as the ‘President of Culture’ and the originator of this chapter of modern K-pop, debuted as the group Seo Taiji and Boys in 1992. After the launch of Twitter, he opened his own Twitter account in April 2010, and has changed the account name to SEOTAIJI 서태지 (@SEO_TAIJI) in March 2021. Currently, he is connecting with fans globally by activatingt the SEOTAIJI concert 'Quiet Night' global live-streaming on Twitter.

In the run-up to ‘World Music Day’, which is celebrated worldwide on June 21, Twitter is preparing to host #KpopTwitter campaign where K-pop fans can participate and communicate. Twitter also plans to organize various events such as #KpopFirstTweet campaign to find and share the first tweets of K-pop artists for a week period starting from June 14 on Twitter Music account (@TwitterMusic) and Twitter Korea official account (@TwitterKorea). #KpopMasterpiece campaign to recommend hidden masterpieces is another event Twitter is currently preparing. Any K-pop fans around the world can participate by posting a tweet with the hashtags. Tweets that have garnered enthusiastic responses from fans will be collected and published on Twitter blog.

This Tweet is unavailable
This Tweet is unavailable.
Only on Twitter
Tweet Twitter logo icon
Tags:
Link copied successfully
More from Events
K-hiphop is trending now: the growth of Korean hiphop on Twitter!
By on Thursday, 29 October 2020
Celebrating 10 years of #KpopTwitter
By on Tuesday, 22 September 2020
#BTS_Dynamite ranks no. 1 on Billboard Hot 100... 46M Tweets in 3 Days!
By on Wednesday, 16 September 2020
19.1M tweets in 7 days, after opening @BLACKPINK and #TwitterBlueroom
By on Tuesday, 30 June 2020
See what's happening