#BTS_Proof: 3 million Tweets in an hour

BTS (@BTS_twt)’ new anthology album Proof was embraced by fans on Twitter all over the world when it dropped on 10th June. Twitter saw an impressive 22 million Tweets on the launch day, and the most Tweeted time was from midnight to 1AM ET on 10th June when Proof was released with 3 million Tweets only per hour.

Regions with the most Tweets about #BTS_Proof

Fans in countries/regions like South Korea, US, and Indonesia were the loudest on Twitter, and the conversations about the group’s latest release poured out in the world from Philippines, India, Japan, Mexico, Brazil, Thailand, and Peru.

#KpopTwitter was a flurry of activity as ARMY took a trip down memory lane, enjoying hit songs from past albums, while looking ahead to the title track “Yet to Come (The Most Beautiful Moment)”. Clearly, the reception towards the band’s past, present, and future music was undeniably explosive.

Twitter launched custom emojis for fans to join in the festivities regardless of where they were. A grey-colored BTS symbol could be included by using hashtags #BTS and #방탄소년단, while #BTS_Proof would activate a special Proof emoji. Furthermore, #YetToCome and #TheMostBeautifulMoment would activate emojis too. 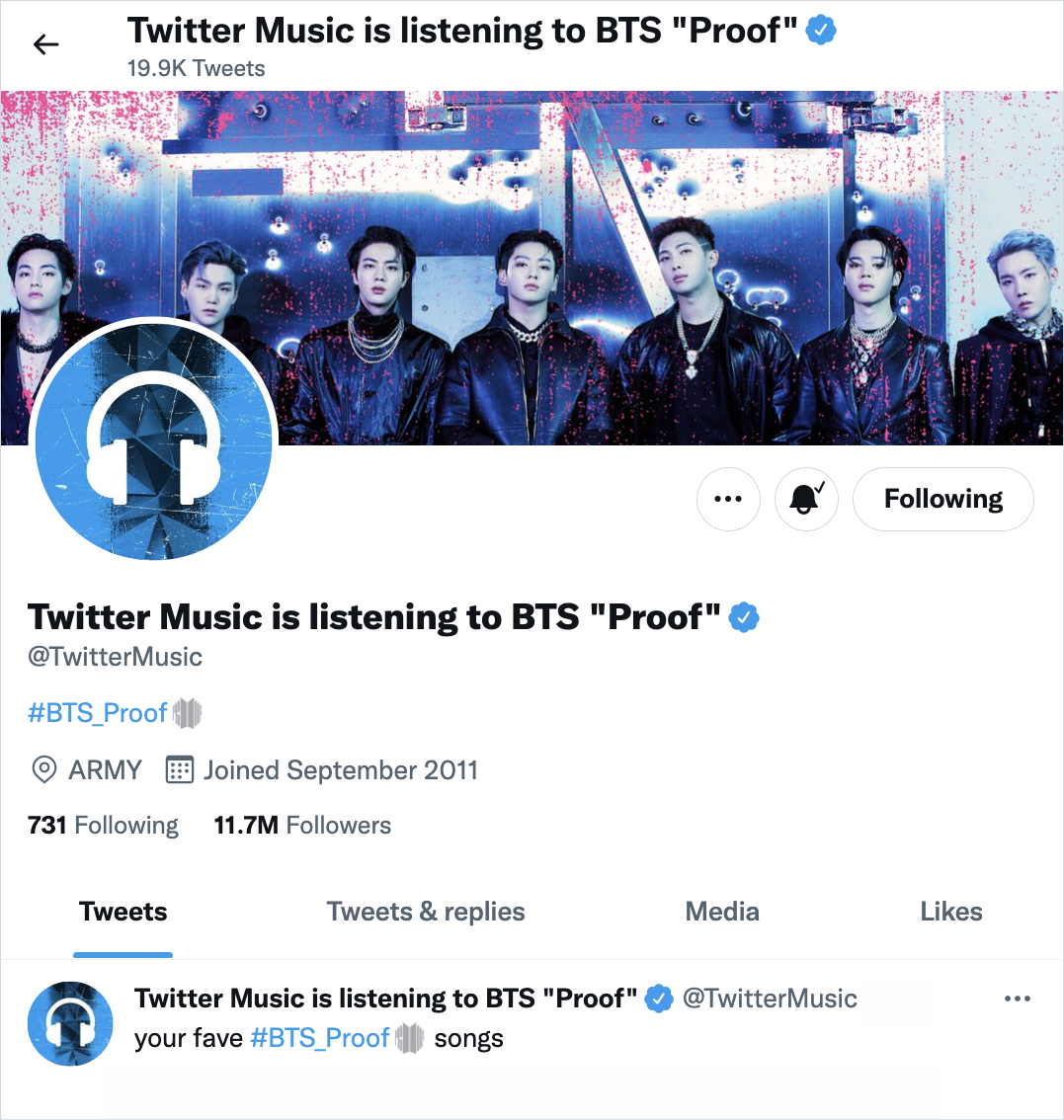 Additionally, @TwitterMusic also changed its header to a BTS concept image, bio to #BTS_Proof and name to ‘Twitter Music is listening to BTS “Proof”’ to promote the new album. 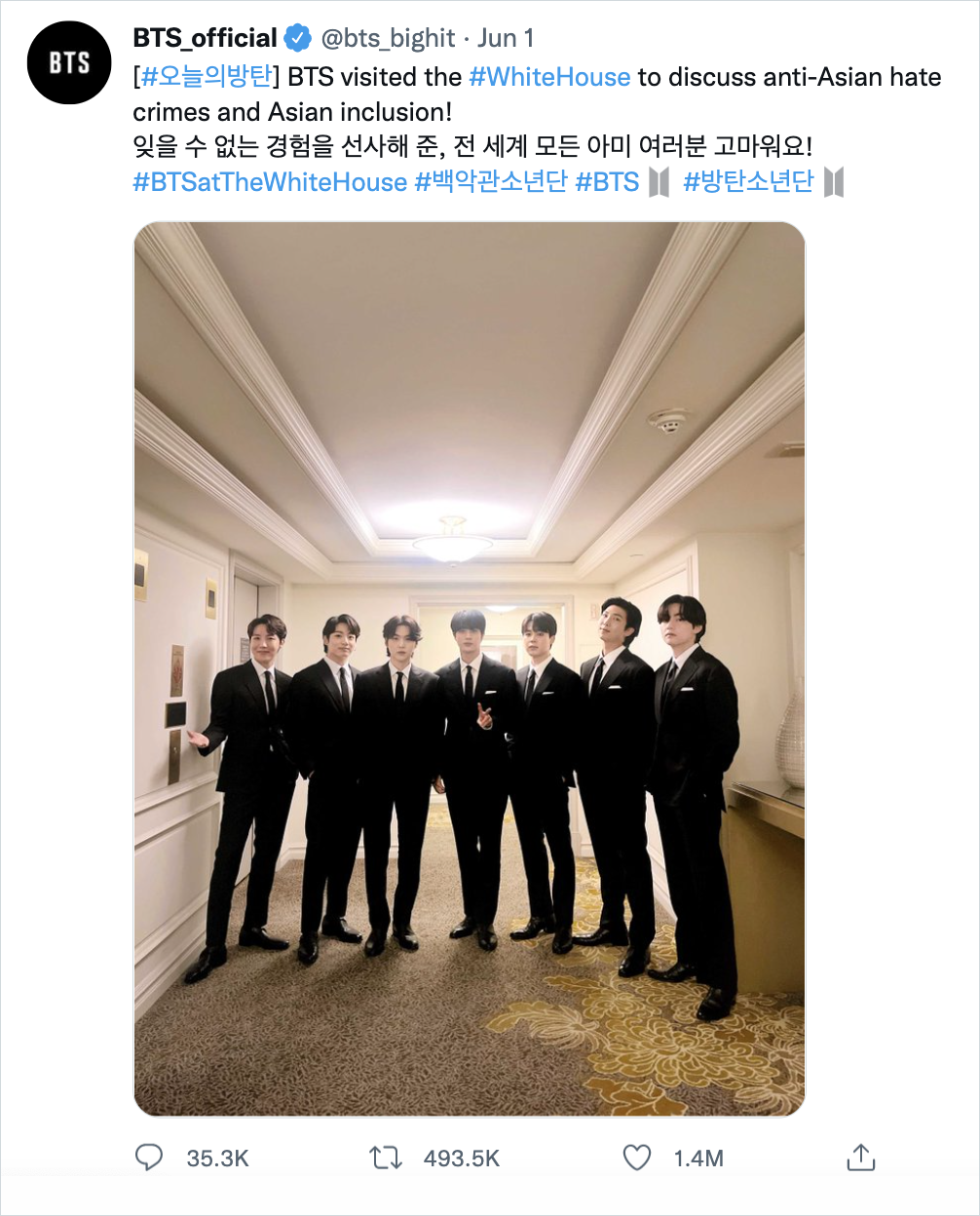 Be it to celebrate new albums, or to cheer them on at important occasions, the #BTSARMY has always stayed close to the band on Twitter. Just weeks ahead of their comeback, BTS made a trip to Washington, D.C., paying President Joe Biden (@JoeBiden) a visit to discuss anti-Asian hate crimes, sending hashtags like #BTSatTheWhiteHouse to the top of Twitter trends worldwide. With our various features and activations, we will continue to connect pop stars including BTS and their fans, helping them to celebrate moments no matter where they may be in the world. Please look forward to the best but yet to come moment that BTS and their fans will celebrate together on Twitter!

This Tweet is unavailable
This Tweet is unavailable.
Only on Twitter
Tweet Twitter logo icon
Tags:
Link copied successfully
More from Events
K-hiphop is trending now: the growth of Korean hiphop on Twitter!
By on Thursday, 29 October 2020
#BTS_Dynamite ranks no. 1 on Billboard Hot 100... 46M Tweets in 3 Days!
By on Wednesday, 16 September 2020
19.1M tweets in 7 days, after opening @BLACKPINK and #TwitterBlueroom
By on Tuesday, 30 June 2020
Twitter celebrates #2020BTSFESTA, generating 21.1M tweets globally
By on Tuesday, 30 June 2020
See what's happening