This World Music Day happening on 21 June, Twitter is bringing back #TweetYourMusic campaign to highlight local musicians and music communities across Southeast Asia. The music community of music lovers alone contributed to 4.3 Billion conversations on Twitter from June 2021 through May 2022 across Southeast Asia (based on conversations on Twitter in Indonesia, Malaysia, Philippines, Singapore and Thailand, 1 June 2021 - 31 May 2022, that mentioned accounts or hashtags or keywords related to music). This was a 21% YoY increase from the year before; with the most conversations coming from Indonesia, the Philippines, and Thailand.

Twitter is where people go to form passionate communities, have conversations with others with common interests and passions, and find out #WhatsHappening. From sports to entertainment, culture to current affairs, Twitter is where like-minded creators and fans can stay connected, no matter which part of the world they are in and no matter what occasion it is. And of course, music was one of the vibrant communities that have been thriving on Twitter. 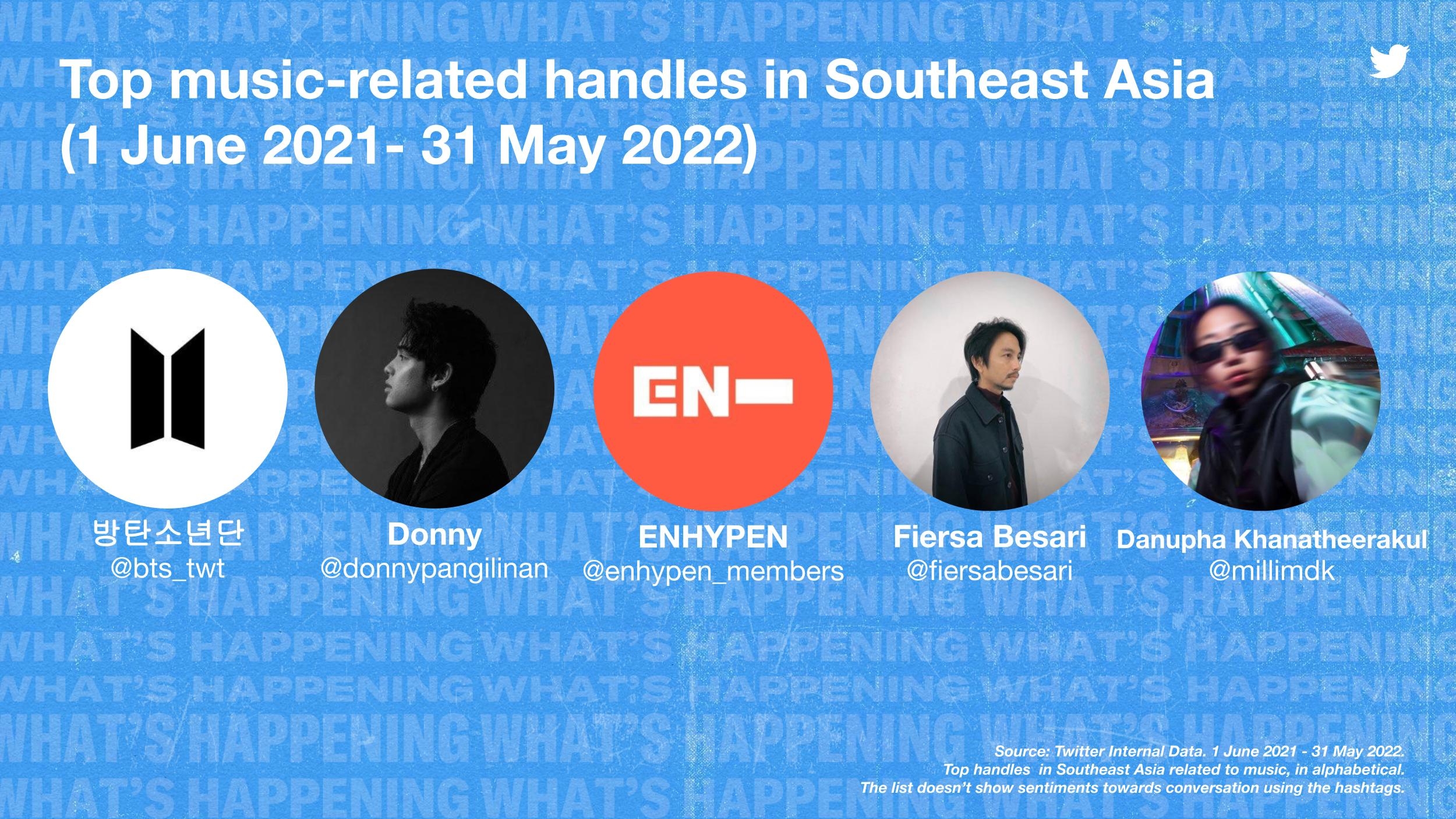 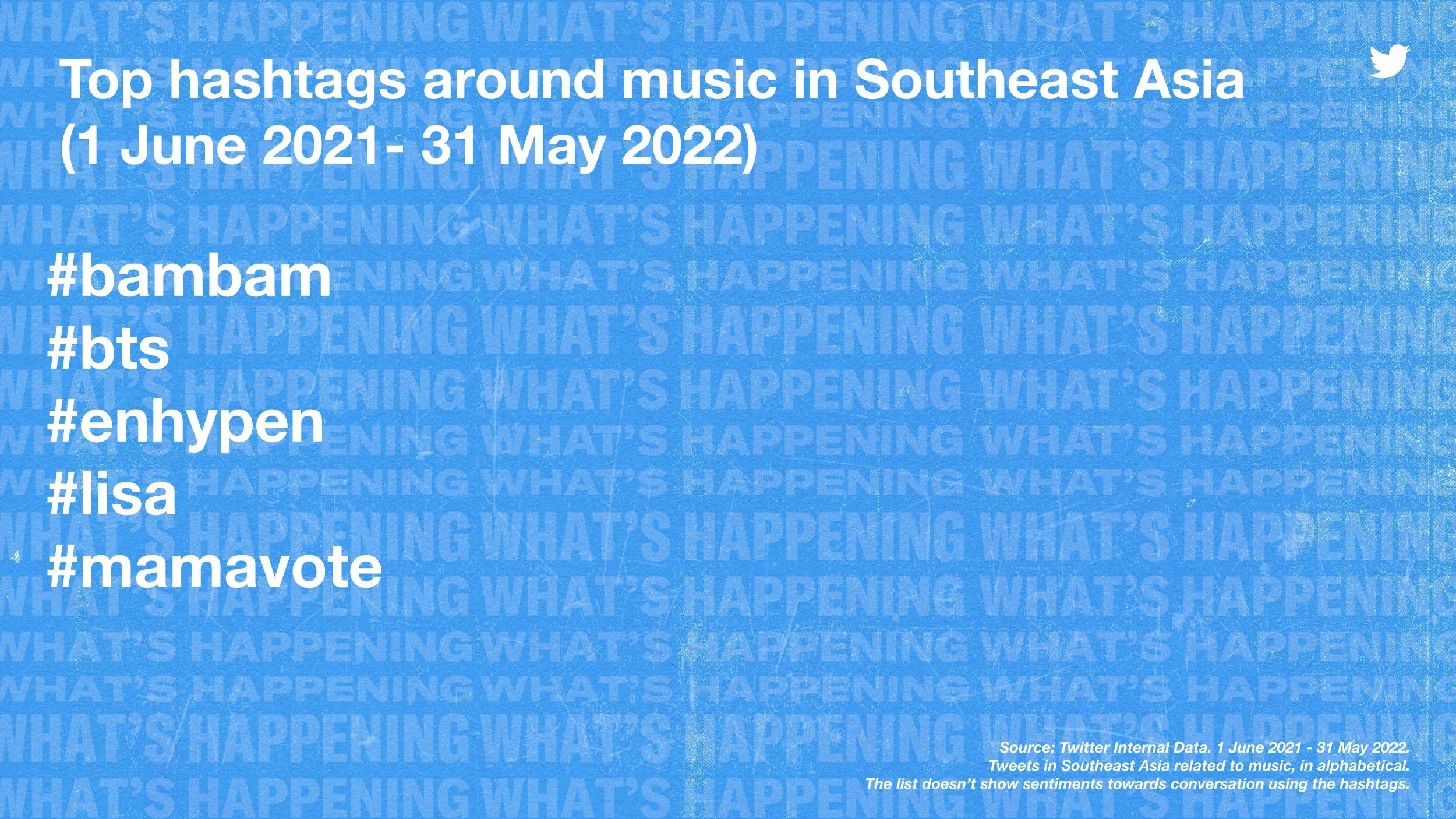 Across Southeast Asia, it’s clear that K-pop is the thread that unites. Whether it was to celebrate the launch of BamBam’s (@BamBam1A) second mini album earlier in 2022, anticipating the Proof album by BTS (@BTS_twt), or to Tweet their love for BLACKPINK’s (@BLACKPINK) Lisa and ENHYPEN (@ENHYPEN), the voices of Southeast Asians on Twitter were loud and clear. And it wasn’t just K-pop who felt the love. Regional artists like Donny (@donnypangilinan), Fiersa Besari (@FiersaBesari), and Milli-Danupha Khanatheerakul (@millimdk) all made it onto the list of top music-related handles - a testament to how much their fans talked about them on Twitter.

Now more than ever, people crave connection with one another and Twitter has helped bridge the gap among fans and also between artists and fans. With 4.3 billion Tweets on Twitter in Southeast Asia around music alone, music is a unifying force that connects people across the region.

#TweetYourMusic will celebrate local musicians, their journey, and the fans that support them with a series of fun and creative activities on Twitter. Across Southeast Asia; different fan bases will have the opportunity to participate in daily music trivia through Twitter Polls, and get to hear some of their local musicians' journeys and inspirations live on Twitter Spaces.

Throughout the #TweetYourMusic campaign, we are engaging with more than 30 local musicians who will join at least one of the fun and creative activities to connect with their fans to celebrate on how music means and inspire them.

In addition, there will also be fun activities throughout the week of World Music Day, such as music polls. From casual listeners to dedicated stan, everyone can join in! With Twitter Topics, fans can easily find the conversations that mattered most to them - be it the latest Kendrick Lamar album drop, Lady Gaga slaying the #TopGun track, or BTS’s title track release for their new Proof album. 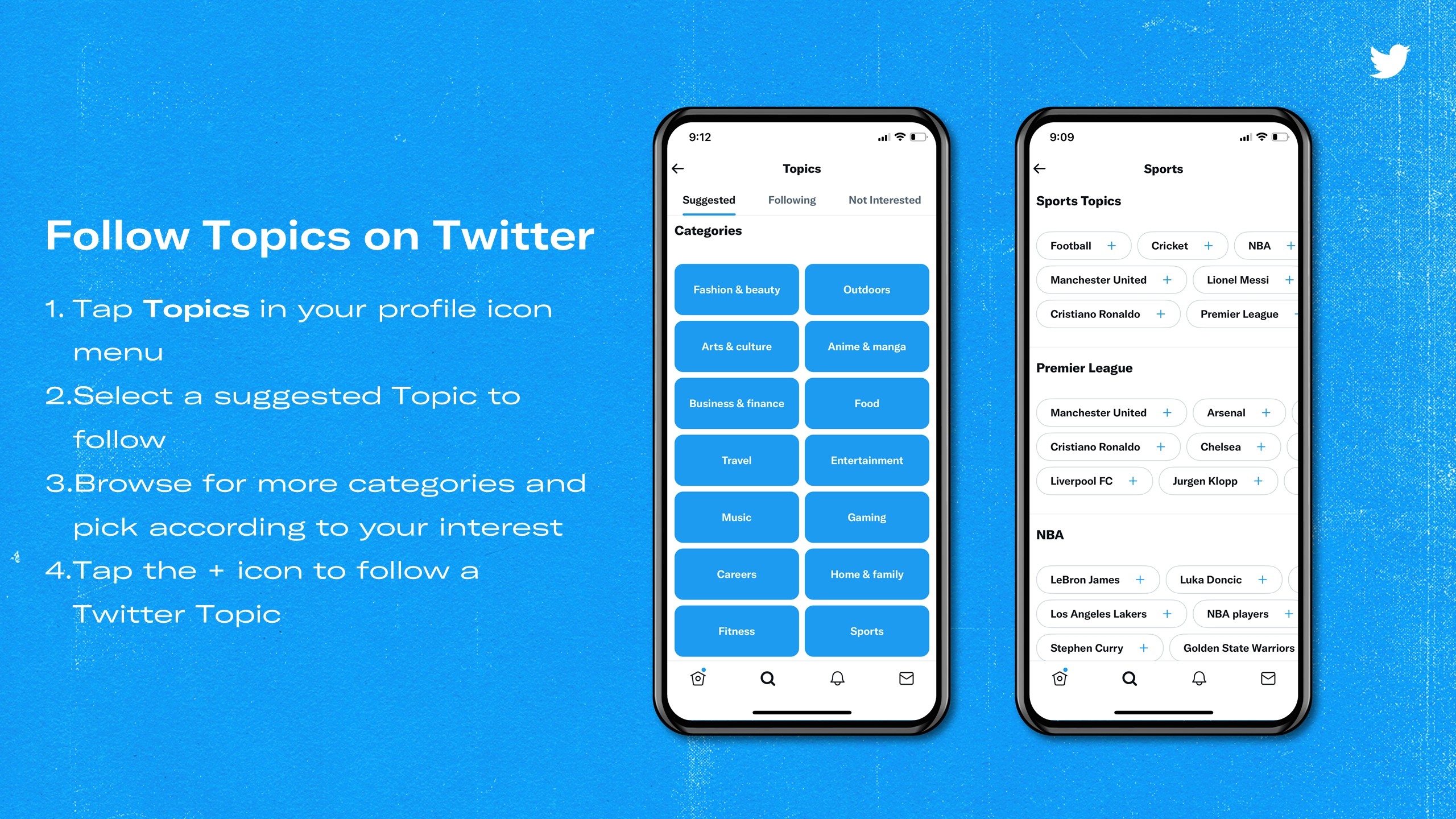