Governor Palin’s speech at the Republican National Convention last night corresponded with a dramatic increase of tweets per second. This graph represents hourly update activity on Twitter over two days this week. 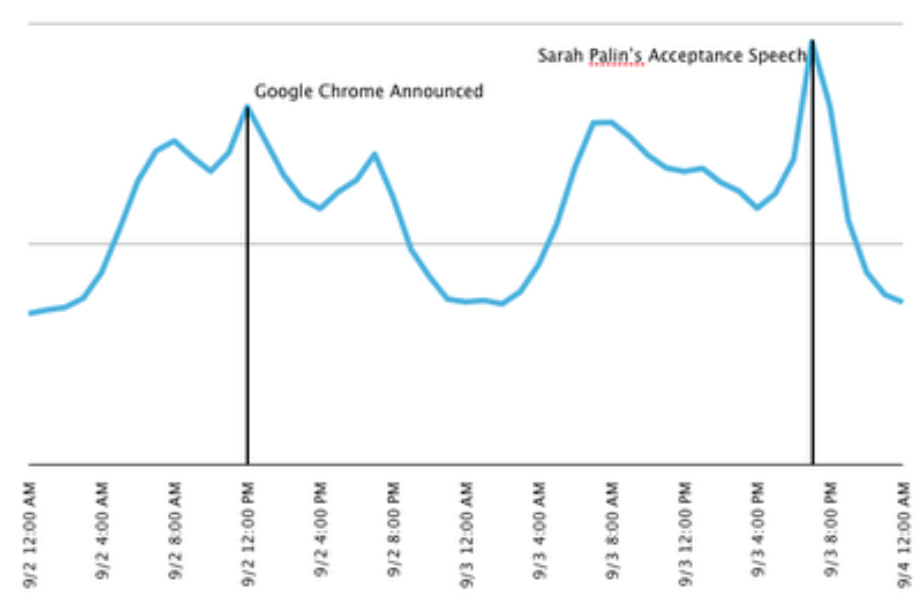 Like hurricane Gustav on Monday, and Google’s new browser launch on Tuesday, Palin’s official nomination acceptance on Wednesday is another example of Twitter being used in real-time during a massively shared event. We continue to see increased activity during storms, earthquakes, breaking news, and more but Politics in particular continues to drive updates, discussion, interaction, and other sustained activity on Twitter.

C—SPAN has built an interesting Twitter integration and Leslie Bradshaw often shares updates on air. CNN also makes use of Twitter and Rick Sanchez has also been broadcasting updates on television as well. The National Press Club recently held a Twitter training session for journalists in advance of convention reporting and there are over 30 members of congress using Twitter. US politics in 2008 is definitely a-Twitter and that’s good for us.

This election year will continue to generate activity on Twitter. Search is a good way to follow Political action as we head to the debates and the election in November. API projects like Politweets are another interesting way to take the nation’s pulse. We’re on the lookout for more like this and we’re interested in facilitating much of this discourse from a features standpoint when it makes sense. Interesting stuff!