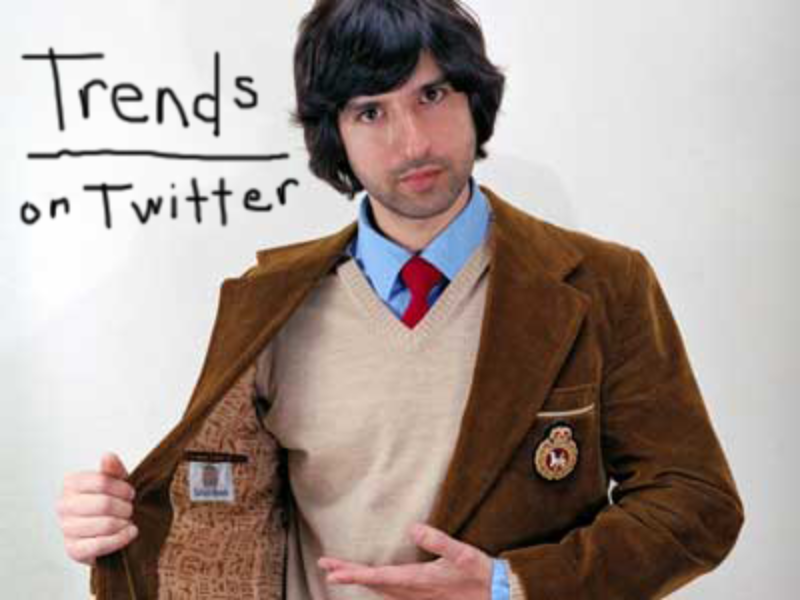 Comedian Demetri Martin sometimes does a bit on The Daily Show about spotting trends. Maybe next time he’s on he’ll have a look at search.twitter.com first. Trending topics on Twitter are keywords that happen to be popping up in a whole bunch of tweets. We measure these topics and adjust them in real-time throughout the day. It’s a great way of finding out what’s happening right now.

Creating a blog post about current trends is challenging because they tend to change while you’re writing. However, earlier today folks had Spain on the brain. Whether McCain was taking a hard line against the Spanish government or if he just blanked for a minute during an interview, Twitterers were not giving him a break. Tweets like this one from @bigskyman flew in fast and furious, “The reign in Spain has strained McCain’s old brain.”

Some trends tend to stick around for a while as people continue to have reactions like this one from Jon MacDonald about trending topic AIG, “Kraft to replace AIG on the DOW Index. Fitting, since most people will soon be eating more Kraft dinners.” Twitter also seems to be powering a vibrant backchannel for the Web 2.0 Expo in New York City which people are participating in by adding the keyword #w2e to their tweets. The Dow zooming up at the last minute has lots of folks tweeting in surprise this afternoon.

Sarah Palin continues her reign as queen of the tweets with people still reeling from Tina Fey’s spot on impersonation—and eerily similar physical appearance. The Sara Palin baby name generator is still making the rounds as is the topic of her coveted Japanese eyeglasses. The news of Palin’s hacked Yahoo! Mail account is old but today people are twittering about the password: “Popcorn.” It may have been set by the hacker but nevertheless, it’s a salty tidbit today on Twitter.

Moving up the ranks in today’s trends is something that shouldn’t be there until tomorrow but it’s apparently starting a day early. People are already warming up for the yearly event that takes the web by storm: Talk Like A Pirate Day. Arrr you ready for it, matey? I’m also learning just now that It’s Always Sunny in Philadelphia is premiering a new season tonight—better set the TiVo. It might be fun to try and package these trends up on a regular basis but we’ll have to be fast about it!