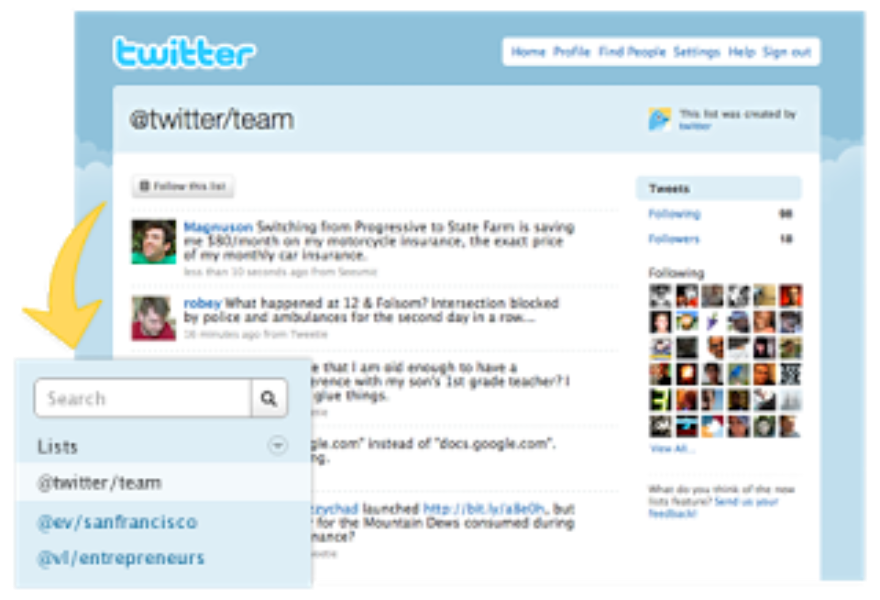 My name is Nick Kallen (@nk) and I’m the project lead on Lists, a new feature we’re testing with a small subset of users. The idea is to allow people to curate lists of Twitter accounts. For example, you could create a list of the funniest Twitter accounts of all time, athletes, local businesses, friends, or any compilation that makes sense.

Lists are public by default (but can be made private) and the lists you’ve created are linked from your profile. Other Twitter users can then subscribe to your lists. This means lists have the potential to be an important new discovery mechanism for great tweets and accounts.

We started working on this feature because of the frequent requests we received from people who were looking for a better way to organize information on Twitter. Of course, that means not just twitter.com—the Platform team will follow up in a few days with information on the Lists API. This will allow developers to add support for Lists into your favorite Twitter apps.

We’re just doing limited testing for now. But once we’ve tested the feature out a bit, we’ll launch it for all accounts!

Thanks to @rael, @vl and the rest of the team who worked to get this limited release out today.