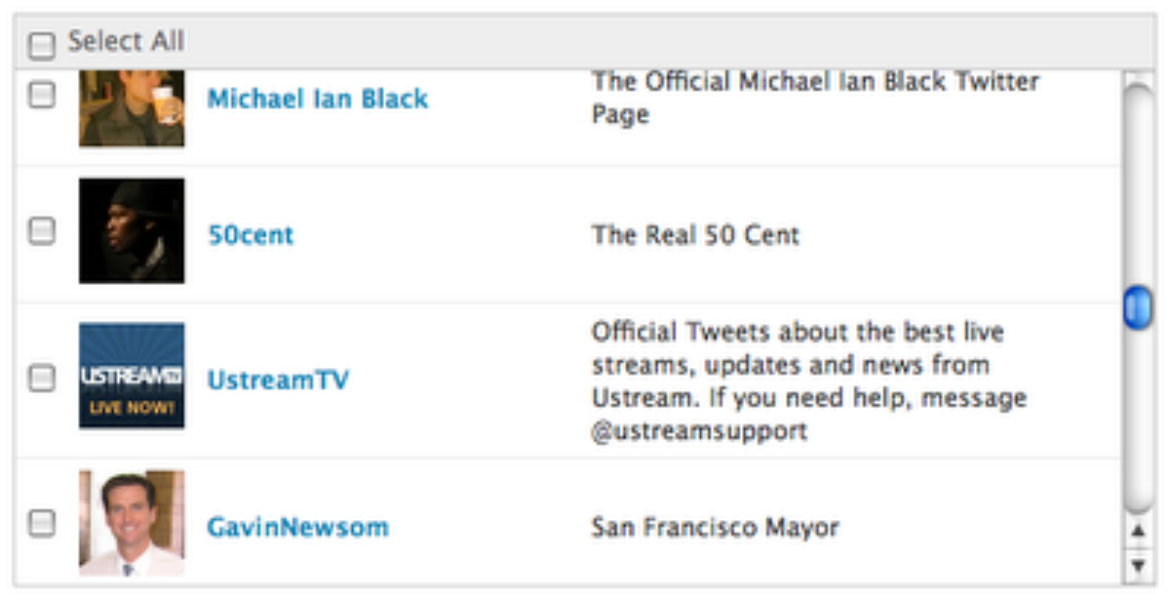 About a month or so ago we noticed a certain percentage of new users were signing up and then not following anyone. When you don’t follow any other accounts on Twitter the product is not as relevant as it could be. To improve the user experience, we started suggesting some accounts to follow. As a result, new users are much more engaged and active. However, Mark Glaser, a journalist from PBS has asked me for more transparency into how we are creating the list so I’ll assume others are interested as well.

How Do We Choose?

We’ve explained that the Suggested Users list is a bit like your local book store’s staff picks but there’s a little more to it than that. Our Chief Scientist developed a program that scans active Twitter accounts for a bunch of key ingredients such as how much of the profile is filled out, certain indications that the account is interesting to others in some respects, and a few other signals.

This program then generates a list of potentially interesting Twitter accounts that myself and some product team folks here at Twitter take a look at for another set of criteria. For example, is the account a good introduction to Twittering for a new user? Does the person or organization running the account have a fairly wide or mainstream appeal? If they are a celebrity or business, have we confirmed it’s really them?

Finally, we’ll do a gut check internally with a couple folks before adding them to the Suggested Users list. The list continues to grow and change although only a subset of twenty accounts are randomly displayed as suggestions during the new user signup process. Twitter is not paid to include accounts in this list. The Suggested Users feature exists to do a job—it makes Twitter more relevant and valuable to users. All that being said, when we find out Oprah starts Twittering for real we may very well put her on the list.

The program that we run looks for a few different things but it definitely helps to fill out your profile info in account settings because otherwise it may skip right over the account. Suggested Users are getting more followers because they are suggested but that doesn’t mean everyone else is getting fewer followers. In fact, the feature is working to create more active users who are in turn discovering and following more accounts which raises the potential for everyone.

So, that’s how we’re doing the list today. We may very well change the way we populate this list or stop using it altogether if there is some other way to get the job done.