There’s a new book out called Twitter Wit featuring “the Funniest Tweets of All Time.” When Nick Douglas asked us about his ambitious plan to curate this collection it sounded good provided the right permissions were in place—and only if it was funny! After reading a draft, we bought copies for everyone at Twitter HQ. The tweets are irreverent, inappropriate, geeky, and pretty much hilarious. If you don’t like one, you’ll like the next. Twitter Wit is one of those books you can’t help reading aloud to friends. Like this: “Why should I be the one to take the kids to see the their psychologist? I don’t even love them!” via @fireland. 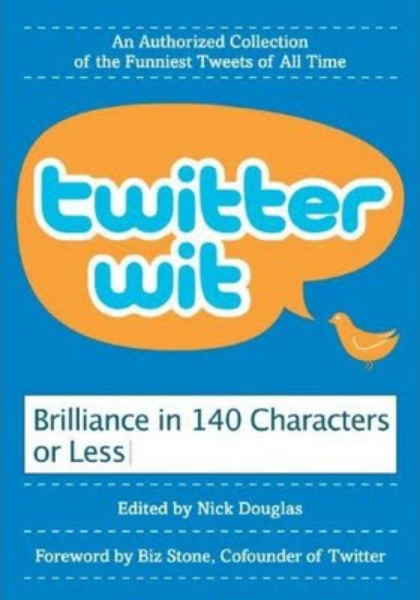 We have no financial arrangement with the publisher but Nick invited me to write the book’s foreward. The first few pages of Twitter Wit provided an opportunity to share some behind the scenes perspective and highlight the significance of humor as a meaningful part of communication. The most important contribution I could make was to celebrate the team here at Twitter HQ as well as everyone around the world sharing, discovering, and building on the service. Nevertheless, @pagecrusher’s question remains unanswered: “Why aren’t martini glasses shaped so that they don’t spill so easily on the bus?” Also, there’s a contest.