A Triumph for Chile 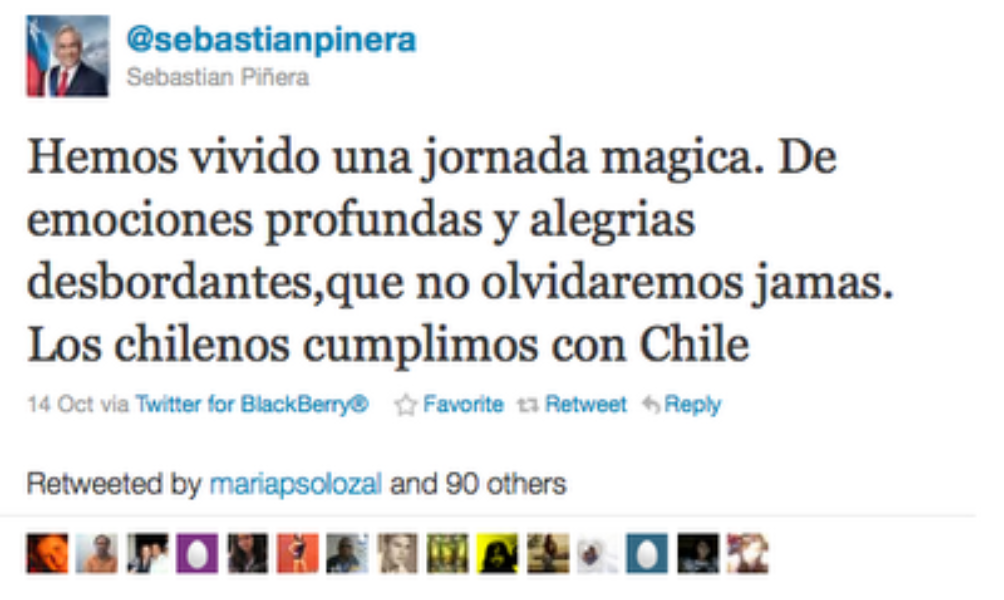 This week, people around the world expressed solidarity in celebrating the rescue of 33 miners trapped deep in northern Chile’s San Jose Mine for 69 days. Twitter became a central point for the expression of their support, with more than two million rescue-related Tweets on October 13, the day the rescue began.

When the 33 miners were trapped half a mile underground ten weeks ago, Chilean President Sebastian Piñera tweeted “The government will continue doing everything humanly possible to get the miners out alive…”

Laura Gómez (from our international team) and I are in Chile this week to speak about our platform with students and the community, and had a chance to observe the rescue celebrations first hand. At a local bar during the final few minutes of the rescue, customers repeated Chile’s national chant with zeal. Both Laura and I borrowed phones from our local friends to tweet for the occasion.

Local newspapers printed special issues dedicated to the rescue. One paper dedicated a whole page to Tweets from around the world to show the community the world is cheering them on.

This was another powerful example of how the way we experience world events is evolving. When people can experience local events on a global level through open communication, humanity can move forward as a whole with the greater empathy that comes from sharing our unique perspectives and understanding of the world.