Android TweetDeck One Week In

It seems like just yesterday we were using our top secret Android TweetDeck, sending mysterious test tweets and working everything into shape for a public release. Actually, it was about a week ago. Last Thursday we unleashed the first public beta of Android Tweetdeck and braced ourselves for impact.

Things went crazy straight from the get go. An older test build somehow made its way into the wild and started a worldwide warez-tastic tour with Android early adopters. It was interesting to say the least but not quite what we were expecting. Thankfully we were planning on releasing the REAL beta the next day so the damage was minimal. It was even kind of cool to see people’s early reactions (although they were picking up on some rough edges we had already polished out.)

The actual proper release went off like gangbusters. We gave out a few early copies to bloggers who were really enthusiastic about our entirely new interface. We setup our emailer to send out the first version and were slammed with 20,000 requests within a few hours. Then we sat back in the pub and eagerly watched for your reaction.

We were really happy with what we heard. For the most part everyone understood that this was the first version and there was a lot more to do. The feedback was great and fit with what we were planning to fix up, and the positive reactions got us all super excited :)

Fast forward to today. We’re releasing our fourth version of the beta, fixing more bugs, incorporating more of your feedback and not slowing down a bit. Even though we haven’t officially released the app yet, TweetDeck Android is generating more tweets and status updates than our 3 month old iPad app.

Today’s build includes a brand new column setting page. We started working in refresh settings in the last build but this really polishes everything. You can now set individual columns with notifications, led flashing, sound and vibrate (or any combination thereof). You’ll also be able to set the refresh rate per column and delete the column from this page. 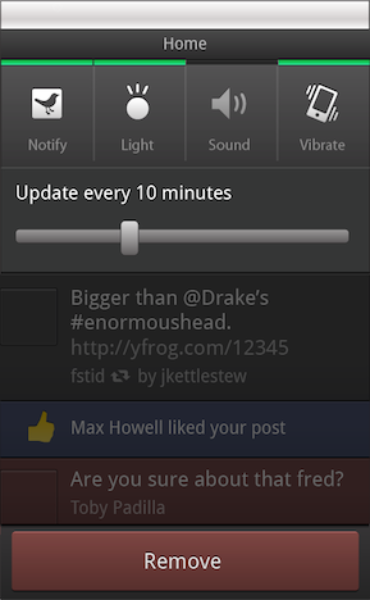 We’re also starting to hook deeper into Android. We’ve included a share “intent” so you can send images, links and other content into TweetDeck. You’ll now see TweetDeck listed when you click share in most Android apps (Gallery for instance).

This build also has support for bit.ly. If you share a link from the browser, the url will be shortened in the compose window. This is rev 1 of this integration, so expect enhancements in future builds.

If you missed out on earlier builds here’s a quick list of things we’ve added:

It’s really great to be developing this app in such short iterations cycles with so much feedback from our users. We’re listening so keep up help!

Just to keep up the visibility on our end here are SOME of the features we’ll be adding in upcoming builds as we approach 1.0 launch:

Also, we’ve had some issues with rogue entities uploading fake (or pirated) copies of our app to the official Google Android Market. We HAVEN’T released our app to the market yet, so if you see a TweetDeck in there it’s fake! We’re working with Google to fix this issue, but in the meantime steer clear and make sure you get your apks directly from us.

We thought it would be fun to recap some of reactions to the release from the past week. Here are some highlights:

Finally, just a quick introduction as this is my first blog post. My name is Toby and I’ve been helping TweetDeck from the Betaworks office in NY. Good to meet you all and I’m sure we’ll be talking soon :)