Over the past 12 months we have been approached by a number of news organisations, requesting help in rolling out TweetDeck across their networks. We are proud to be working closely with Sky News, The Guardian and now NBC News, as well a few smaller organisations, as they increasingly use social networks like Twitter as a discovery mechanism when researching news stories.

TweetDeck is ideally placed to maximise the value of social news gathering. As journalists look to online tools, the use of social media has become necessary for finding real time information on breaking news, or to corroborate facts and figures. Genuine immediate sources can be found, and using geo-location a journalist can find uploaded photos and videos from the other side of the world, as a story is breaking.

Social media commentators have talked for a number of years about how the way we consume news and information is rapidly changing. They have discussed, and will continue to speculate, on how influential social networks such as Twitter and Facebook influence what we read as we let friends and people we follow curate the information we see. But it’s also interesting to hear how journalists themselves are changing the way they discover and source news.

We’ve discovered that the traditional ways of searching for stories and articles over established newswires can be fairly cumbersome and do not necessarily bring back the results a journalist expects. Since the majority of these services also push their stories to Twitter, a simple Twitter Search will bring back a collection of appropriate tweets, which can then be modified and refined. Those tweets can then be cross-referenced against the sender to identify relevancy and to determine how competent a source might be. This doesn’t in any way replace newswires, but complements them.

Of course Twitter has become a source for news stories in itself, and taking a quick look at trending topics throughout a day or visualisation tools such as TwitScoop, can reveal headlines and stories hours before they reach news websites and front pages. With the immediacy of Twitter, and to some degree Facebook, stories develop in real-time with instant access to photos and videos uploaded by “citizen journalists”. 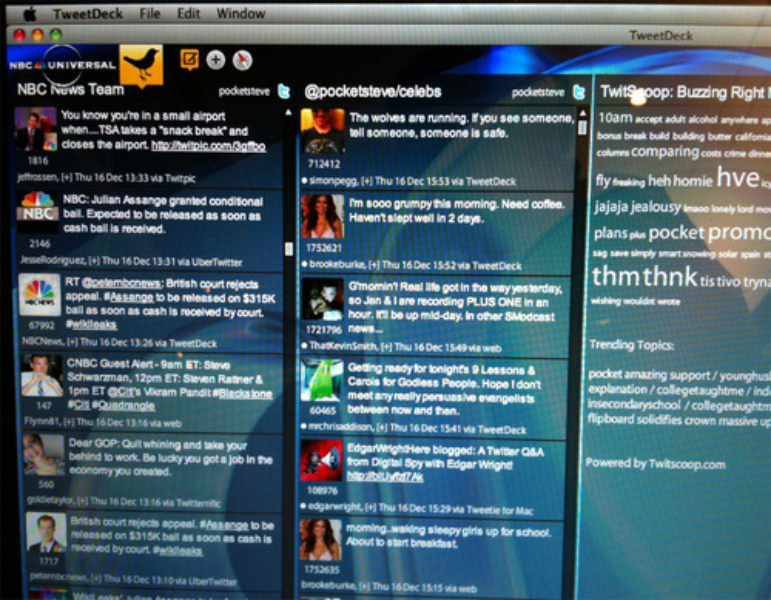