When we launched Promoted Tweets back in April, we said that we would be doing lots of experimenting and iterating, as is typical with everything else at Twitter. Since then, we’ve done and learned a lot – such as adding Promoted Trends to our suite of Promoted Products and making those products available to an ever-widening audience of users and advertisers.

Today, we’re entering a new phase in our efforts. We are launching Promoted Accounts, a new ad product that gives added value to Twitter users. We will also make our Promoted Products available through our partners for the first time. 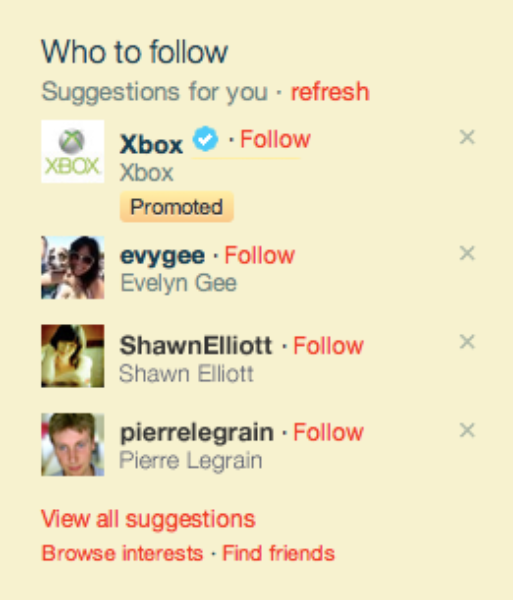 Promoted Accounts are suggested based on a user’s public list of whom they follow. When an advertiser promotes an account, Twitter’s algorithm looks at that account’s followers and determines other accounts that those users tend to follow. If a user follows some of those accounts, but not the advertiser’s account, then Twitter may recommend the advertiser’s Promoted Account to that user. For example, a lot of people who follow several gaming-related accounts also follow @xbox. If someone follows gaming-related accounts, but not @xbox, Twitter may recommend @xbox to that person.

We currently display “Suggestions for You” in the side panel on the right side of your logged-in Twitter.com homepage. Starting this week, you may see a Promoted Account as one of these suggestions. When there’s no relevant recommendation, no Promoted Account will show.

Since we will only be testing Promoted Accounts with a handful of companies initially, there’s a chance that you might not see one at first. We look forward to getting interesting Promoted recommendations to you soon.

Promoted Products for Partners
We are also beginning to make Promoted Tweets and Promoted Trends available beyond Twitter.com – something we have discussed doing since launching Promoted Tweets in April.

We are testing syndication of Promoted Products with a select number of partners – HootSuite is launching today, and others are on the way. These partners will run Promoted Tweets in search and highlight Promoted Trends, sharing in Twitter’s revenue for these products.

This is an important step for these partners and for the many highly active Twitter users who spend considerable time on third-party applications. As with all Twitter launches, we’ll review the initial feedback and determine where we take it from here.

And more
Along with these more noticeable changes, we made additional tweaks to our Promoted Products suite last Friday. We bumped up the Promoted Trend to the top of the trending topics list because we’ve been pleased with the quality of Promoted Trends and people are finding them useful. And you may have noticed that if you click on a Tweet with a hashtag that a brand is promoting, you will see a Promoted Tweet among the related Tweets in the details pane.

It’s been a busy but exciting few months for Twitter’s advertising team. We’ve launched 3 major products in the past 6 months. We’re working with over 40 advertisers – nearly 80% of whom have already become repeat buyers in this short period of time – and we have an exciting roadmap to expand to more advertisers. Plus, the new Twitter creates exciting opportunities to be creative with Promoted Tweets by combining text with pictures and video.

Thanks to our growing engineering and sales teams, you can look forward to more innovative ways to connect people with their favorite brands and interests.